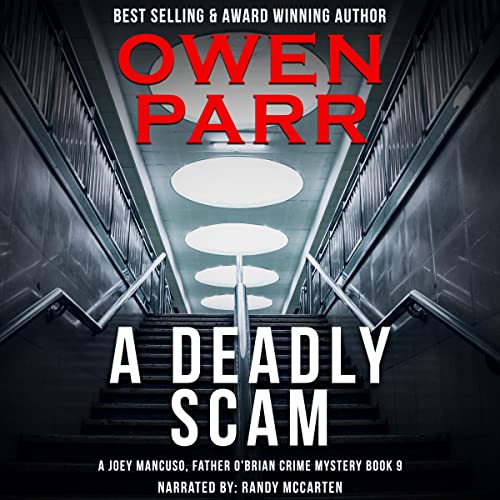 Owen Parr has been such a great hitter for me; I knew going into the ninth book in this series that even though I didn’t think Parr could surprise me, he still did.

A Deadly Scam was probably the most like the historical tales that Sherlock Holmes would take on. The twists and turns in this one were killer. And the ability to keep me hanging on until the end to figure out what was going to happen (and who was to blame), while very tactical by Parr, had me jumping to conclusions every time he would spend a little longer talking about a character/lead.

Overall, I thought A Deadly Scam was well done and jumped off the page. Mancuso tried his damndest to be the last advocate but kept getting sidelined while trying to help solve these cases. I found it an interesting twist on the normal books, and honestly, I loved it with one caveat that may not bother everyone.

(Going into detail only on my blog, not in the “official” reviews)

View Spoiler »Now, I preface this by saying I’m a bigger dude, and I reached out to another bigger guy as well to make sure I wasn’t alone in being annoyed at how this scene in the story played out. I have to write this for two reasons: Parr is still a fantastic writer, and honestly, he could take out one part of it, and I wouldn’t have an issue (I’ll mention the line). And two, it really bothered me. I couldn’t believe that Parr, usually so cautious, decided to be aggressive here. Now, the irony is that even Mancuso tries to be politically correct here in mentioning the guy’s size, but Parr decided he wanted to “fat shame” someone who, frankly, would be a big dude, but wouldn’t be wheezing, taking puffs of his inhaler throughout the conversation. Parr, next time you want to call out someone for being fat, just say they were huge. Don’t add that they’re “5’8 260” because, without that line, I wouldn’t have been offended, but with it… it bothers me a lot. While big, that guy likely wouldn’t have the issues you mentioned. « Hide Spoiler

What kind of sick game is this? The killer is texting Joey Mancuso after each murder with the location.

Is it a challenge? Is he just toying with Mancuso? What kind of psychopath would do this?

Joey Mancuso, Father O’Brian, and the rest of the team are back for their ninth hard-boiled tale. Consistently working out of their Lower Manhattan Irish pub and office. This time, there is no client. Instead, Mancuso has been sucked into this series of senseless murders by personal invitation. A text with the location and an invite to come over.

It appears like random killings of homeless people at subway stations. But there is nothing unexpected about the texts. Witnesses all seem to know there is a white male dressed in a trench coat and a hoody hiding his face. The killer strikes in the daytime, night, and early mornings, with no particular schedule. Not even the same weapon. But he’s a professional. No cameras have caught his face, and no forensics were found at the scenes.

The murder rate in New York City is rising, and a series of homeless people dying, but as crazy as it sounds, this doesn’t seem to be anything out of the normal.

But did the killer make a mistake inviting Mancuso to a joust?

NYPD detectives are asked to join an FBI task force, as Mancuso is sidelined and becomes an FBI person of interest. Mancuso and Father O’Brian, nicknamed the Last Advocates for the Victims by the New York City media, are not standing down. On their own, they’re working the case, and no one will stop them.

Anyone who loves Michael Connelly’s Harry Bosch will devour Joey Mancuso and his team. Likewise, lovers of novels and police procedurals like Nelson DeMille’s John Corey and those by Raymond Chandler, Joseph Wambaugh, Lawrence Block, and Rex Stout will love this motley detective team. As will devotees of clerical mysteries and the greatest detective of all time, Sir Arthur Conan Doyle’s Sherlock Holmes.

A Deadly Scam by Owen Parr
Narrator: Randy McCarten
Length: 7 hrs and 35 mins
Published by Self Published on July 11th 2022
Genres: Mystery
Format: Audiobook
Buy From Amazon
Buy from Audible
Also by this author: The Dead Have Secrets, A Murder on Wall Street, A Murder on Long Island (A Joey Mancuso, Father O'Brian Crime Mystery #2), The Manhattan Red Ribbon Killer