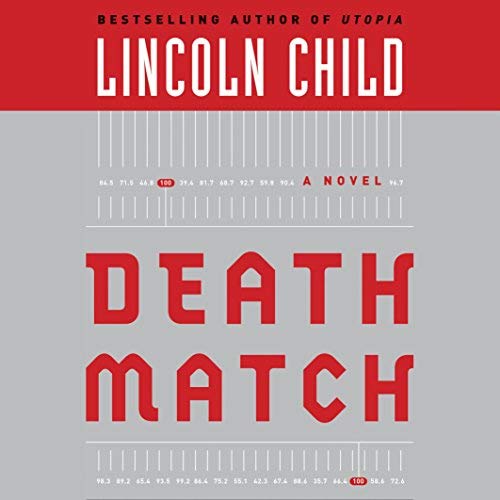 I don’t remember when I first read this but it was way before I was blogging.  It was one of those books that continued to stick out in my mind and I couldn’t really remember why.  So, I decided to pick it back up for a second read – this time on audio.  Man, am I glad that I did.  If I liked the book before I loved it more now.

Lincoln Child, known as half of the powerhouse writing duo with Douglas Preston writes of a future where you can be matched to a 90ith percentile of a person who is “perfect” for you.  It’s all done with AI and algorithms that are deeply protected.  But, suddenly two of the 100% matches (there are only 6 ever in the companies history) commit suicide.  Enter Christopher Lash, a gifted former FBI forensic psychologist.  He’s called in by Eden Technologies to investigate the suicides to figure out what Eden could have done to prevent them.

For a book published in 2004, this has a lot of forward-thinking technology in it.  63% of Americans had access to the Internet (which remembering back makes sense to me but still blows my mind).  AI was in it’s pre-infancy.  Child decided that online dating was going to be the next big leap in technology and why wouldn’t you shell out $25,000 for happiness.  We pay a lot more for college and that gets us nowhere anymore.

Reading this 14 years after it was published there were a few things that since AI has become more prevalent would make sense to add to this book – but it would have taken some of the legs out of it.  I liked reading what Child thought would happen back then and I think he was right more than he was wrong.

A riveting technothriller with surprises around every corner – I enjoyed Death Match in 2018 as much as I did when I first read it 10+ years ago.  It’s also a reminder that we need to be careful with technology and not let it run amok.

Lewis and Lindsay Thorpe were the perfect couple: young, attractive, and ideally matched. But the veil of perfection can mask many blemishes. When the Thorpes are found dead in their tasteful Flagstaff living room (having committed double suicide), alarms go off in the towering Manhattan offices of Eden Incorporated, the high-tech matchmaking company whose spectacular success and legendary secrecy have inspired awe around the world. The Thorpes, few people knew, were more than the quintessential happy couple - they were Eden's first perfect match.

A short time later, Christopher Lash, a gifted former FBI forensic psychologist, receives an urgent plea from Eden to perform a quick - and quiet - investigation into the deaths. Lash's psychological autopsy reveals nothing suspicious but inadvertently dredges up the memories of a searing personal tragedy he has kept at bay for years.

The situation changes suddenly when a second Eden couple is found dead - by all appearances, another double suicide. Now Eden - particularly Richard Silver, the company's brilliant and reclusive founder - has no choice but to grant Lash unprecedented access to its most guarded secrets if he is to have any chance of determining what is going wrong. The hidden world he discovers is a stunning labyrinth of artificial intelligence, creative genius, and a melding of technology that does indeed, to Lash's surprise, deliver on Eden's promise to its clients: the guarantee of a perfect lifelong mate. But Lash's involvement in the investigation becomes more personal and dangerous than he could have imagined, nearly as soon as it begins.

With tremendous imagination and skill, master thriller writer Lincoln Child renders a setting too frighteningly believable not to be real. Infused with relentless suspense and a riveting pace, Death Match is Child at his best.