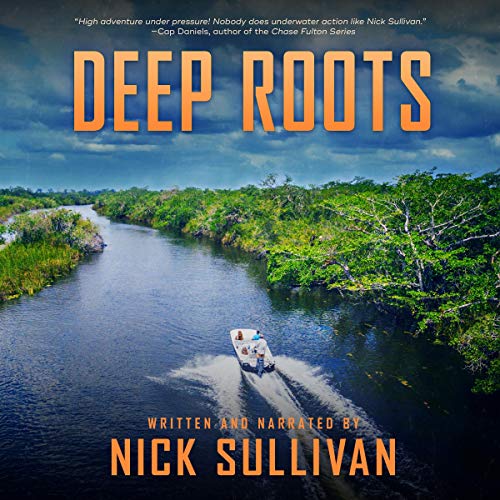 This is the third book in the The Deep and it starts off with a bang. Right away a dead body is found and Boone and Emily are trying not to get dragged into the investigation… but they find a little jade-like figurine and they’re both intrigued. Little did I know this was only the beginning…

Sullivan is able to bring an insane amount of realism to his books that make them jump off the page. Deep Roots was no different. This time we’re treated to diving in Belize, with some cave diving thrown in. What a thrill! Sullivan throws us off the boat and into the deep end so to speak with this one. Causing Boone and Emily to face their fears and face a new enemy.

The emotional attachment I have to these characters keeps growing with each book. Each story they become more and more real. They have problems from their former run ins with other bad guys. They have panic attacks and PTSD when certain objects appear. It’s just another layer that Sullivan adds to the stories to take them from good to great.

I can’t go into the main antagonist in Deep Roots too much but I thought that Sullivan did a great job setting the scene. He caused a massive amount of it but kept writing it in a way where I would second guess myself. I always try and guess the ending of books and I got some of this right but other parts I was way off. I enjoy that – I can kind of know where the book is going but also be caught off guard.

Overall, this was another great addition to the series and the setting, characters, and suspense were all phenomenal. I can’t wait to see where Boone and Emily take us next… I mean where Nick Sullivan takes us next. I might have to find a way to pick his brain and see what other tropical locations he’s dived.

One of the best things with having a professional narrator write his own books is that he is able to narrate them as well.  What you get is a narrator that knows exactly how to narrate a book… reading his own book. This allows the performance to really jump off the page in exactly the manner that Sullivan was thinking when he wrote it. He knows exactly how Boone and Emily sound like. Knows what each “bad guy” would talk like. And is able to add that little bit of depth to the performance that you wouldn’t get if he didn’t narrate it himself. Honestly, his narration of Emily is almost better than Boone. Part of it is the writing, but there were numerous scenes (I’m looking at you British pronunciation of Jaguar) that had me in stitches and that was mainly due to the combination of Sullivan’s writing and narration.

In the mangroves of Belize, something ancient lies hidden beneath the roots. And when it surfaces, so too will one of man’s baser inclinations. The root of all evil: greed.

Boone Fischer and Emily Durand have enjoyed months of quiet on the tiny island of Caye Caulker. After surviving Hurricane Irma and a mountaintop madman, the two divemasters have finally begun to relax. Big mistake.

Following on the fins of the best-selling thrillers Deep Shadow and Deep Cut, this third Caribbean action-adventure thriller in The Deep Series takes the listener on a whirlwind tour of Belize. From the offshore cayes to distant lagoons, from tropical rivers to jungle ruins lost in time, Boone and Emily race to untangle themselves from a deadly plot that threatens to shatter their lives.