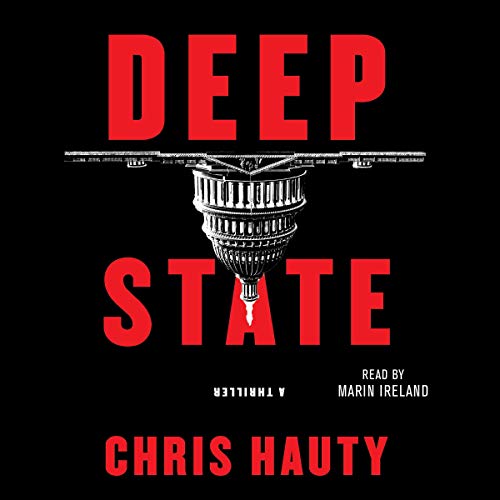 Deep State, the debut novel from Chris Hauty was an intense political thriller that revolved around a seemingly unlikely heroine. A former soldier (who is also an insanely talented boxer) interning in the White House. The entire political system has people fighting over everything – the President included. You either love him or hate him.

It all starts with one dead body.  The White House chief of staff is found dead  – from there the hushed talks and catty bickering of the other interns is no longer important. This sends our main character down an insane rabbit hole that is full of backdoor deals, threats, and so much more that I can’t talk about for fear of ruining the story.

I try my hardest to write spoiler-free reviews and I won’t officially spoil this but I have to admit that I did not see the ending coming at all. I wouldn’t have guessed it if you’d given me one hundred guesses. I love when a book can throw me for a loop like that. It makes for a refreshing reading experience.

The book itself was a great thriller, especially from a debut author. It was full of lots of real details and there were some fictional aspects sprinkled in to take Deep State up a notch. I thought this book was going to end about 3 times before it actually did.  Hauty kept throwing more and more at me and taking me for an even deeper dive into the “deep state” than I expected.

What’s interesting to me is that I don’t believe that this book was written for or against any specific side of the political spectrum. I went into it expecting hours of cliche conspiracy-level drivel but I got a well written Thriller with conspiracies and political tensions weaved in without being so loud and distracting that they take away from the story. I was pleasantly surprised.

In this white-knuckled, timely, and whip-smart debut thriller, a deadly plot against the president’s life emerges from the shadows of the deep state.

Recently elected President Richard Monroe – populist, controversial, and divisive – is at the center of an increasingly polarized Washington, DC. Never has the partisan drama been so tense or the paranoia so rampant. In the midst of contentious political turf wars, the White House chief of staff is found dead in his house. A tenacious intern discovers a single, ominous clue that suggests he died from something other than natural causes, and there may be a wide-ranging conspiracy running beneath the surface of everyday events: powerful government figures are scheming to undermine the rule of law – and democracy itself.

Soon, allies are exposed as enemies, once-dependable authorities will fall under suspicion, and no one seems to be who they say they are. The unthinkable is happening. The Deep State is real. Who will die to keep its secrets? Who will kill to uncover the truth?