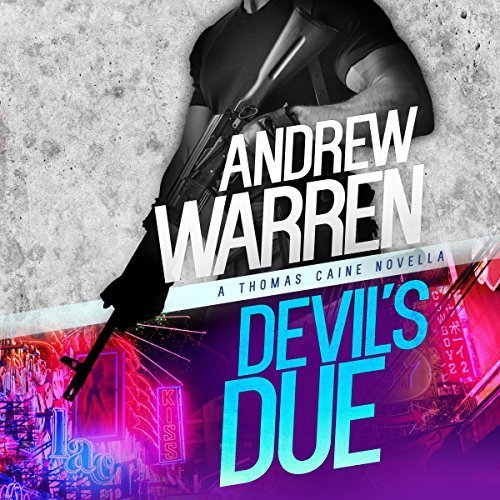 You Save Your Friends At Any Cost

I had a hard time getting into the first Thomas Caine Thriller and I’m not 100% sure what caused it.  Warren knows how to write a thriller and shows it in Devil’s Due.  This prequel novella is fast-paced and full of action.  Caine doesn’t have a lot of time to save the life of his friend and he dives in head first trying to do everything he can (and recalling his “old life” in the process).

I can see now how this leads a little into the first novel in the series.  I know it’s not a “required read” but I did get a little more of the backstory of Caine.  Who he is, a little of who he was, and a lot of what he’s been doing since going dark.

The relationship/friendship aspect of Devil’s Due was heartwarming.  A friendship built on mutual trust from two people who don’t trust many people.  It was neat to see even though Warren didn’t write an entire book to show the back and forth – you could tell they cared about each other.

As I mentioned above – this was action-packed. Warren didn’t take much time at all to jump right into the action.  From a bar fight to a bomb going off – this has it all.

The narration was done by Bryan L. Anderson who I thought did a really nice job.  My only issue was with his female voices.  I know that it’s hard to ignore when the text switches from male to female and most male narrators have a tough time with this – but Anderson did an okay job… it was just too quiet.  Every female-lead scene he did was just a tick quieter than the males in the same scene.  It wasn’t enough to drive me totally mad but it did bug me.

Overall, a great novella for action-packed thriller lovers and a really good introduction to the Thomas Caine series.

A betrayed assassin is a kidnapped girl's only hope. Introducing Caine: Rapid Fire...

Thomas Caine is a dangerous man.

A former CIA assassin, he was burned, betrayed, and left for dead. Now, he struggles to stay off the grid, and hides from his dark past in the seedy underworld of Pattaya, Thailand. But when human traffickers detonate a bomb in a crowded Thai market, it sets off a chain reaction that drags Caine out of the shadows.

This new syndicate has taken the one person Caine has sworn to protect, and the vengeful former assassin will wage a bloody one-man war to get her back. Soon, he finds himself taking on the Russian mafia, and an insane criminal warlord who believes he is the devil himself. Can Caine use his deadly skills to defeat these new enemies, and help an honest cop save a group of kidnapped girls before the clock runs out?

Find out in this explosive introduction to the Thomas Caine thriller series. Fans of Jason Bourne and Jack Reacher will love Thomas Caine! Reviews say: "The next Jason Bourne, or James Bond! A burning page turner, swift and intense! If you love ACTION... Caine and Warren are your team!"

Each Caine: Rapid Fire novella is a lightning fast read, packed with thrills and suspense. Click the Buy Now button and dive into Devil's Due today!

Andrew Warren was born in New Jersey, and studied film, English, and psychology at the University of Miami. He has over a decade of experience in the television and motion picture industry, where he has worked as a post production supervisor, story producer, and writer. He currently lives in Southern California.

Trojan: The Enemy Within by David L Wall