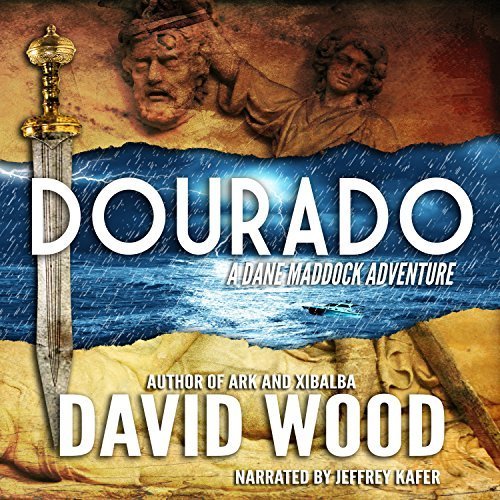 This is part of a bigger box set that I have out but I wanted to break the reviews up into book-by-book since that’s how I do all the other ones. I’ve read a few other books in this series and the other series related to Dane and Bones – but went back to the beginning with Dourado. It was cool to go this far back to see what Wood used to do as an author (how he’s improved and the “winning” moments that he’s kept in most of the books.

I usually call out the narrator later – but there was something that Kafer did in this book that I don’t think he does anymore.  When a phone call (or radio call, I believe) happened – he would distort the audio a little to make it sound like it was coming from a radio/phone. I absolutely loved that. I don’t know if everyone would – but in books like this, it was a really nice effect without going overboard.

Dourado was an interesting story.  I couldn’t really tell what the “treasure” part of it was going to be.  There was a part that I thought “okay, I think the book could end” but there was another couple of hours.  It was nice, and kept me on my toes! The lead up to the ending was perfectly thrilling without being overdone – a classic Wood tactic.

Overall, I thought that Dourado was enjoyable and definitely a great lead in to this box set.

A sunken treasure. An ancient Biblical artifact. A mystery as old as humankind. On January 25, 1829, the Portuguese brig Dourado sank off the coast of Indonesia, losing its cargo of priceless treasures from the Holy Land. One of these lost relics holds the key to an ancient mystery. But someone does not want this treasure to come to light.

When her father is murdered while searching for the Dourado, Kaylin Maxwell hires treasure hunter and former Navy Seal Dane Maddock and his partner Uriah "Bones" Bonebrake, to locate the Dourado and recover a lost Biblical artifact, the truth behind which could shake the foundations of the Church, and call into question the fundamentally held truths of human existence.

Join Dane and Bones on a perilous adventure that carries them from the depths of the Pacific to ancient cities of stone as they unravel the mystery of the Dourado.

The Dane Maddock Adventures Volume 1 by