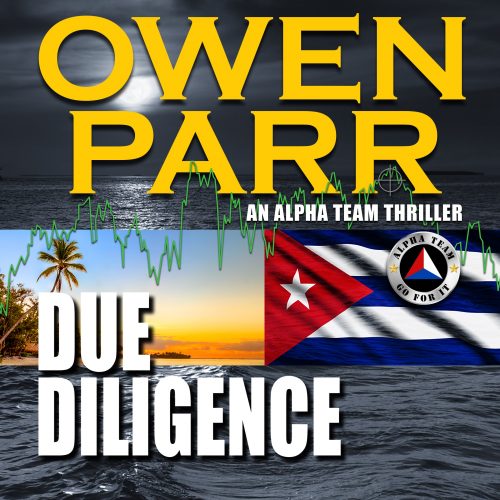 This isn’t my first Owen Parr novel and there’s a reason for that.  Parr writes some of the most interesting and enjoyable books I’ve had to chance to listen to. Due Diligence is, I believe, Parr’s first novel and you can tell a little bit. There are a few things in the pacing (specifically the way that people are talking to each other (and reacting to that)), but it’s not enough to take away from the entire story in my opinion. This book definitely shows where the fire in his novels comes from and it was interesting to get to go back and take a look at this – now re-recorded with Fred Filbrich – the same narrator for his Joey Mancuso & Father O’Brien novels (which I love!)

In Due Diligence we’re treated to a back and forth timeline featuring a few key players. It’s a look back into their past and then a glimpse into a more “present” day version.  It’s not fully explained why this is done but towards the end of the book it’s much easier to figure out why.

Parr definitely threw me for a loop with this one.  I didn’t realize what was going to happen until the book was almost over.  He had me completely at a loss – I couldn’t even come close to guessing what the outcome was going to be. The neat part was that this book blends really well into other stories from Parr as well.  It may have come early in his writing career but the foresight to keep things close like this is fascinating to me.

Since I’ve spent so much time talking about other books from him and how this book blends into others I haven’t really talked too much about this actual story.  Parr writes a political thriller that felt like it could have happened.  It had that “oh, one wrong call and this could have been true” feel to it. The realism mixed with the pacing of a Parr novel meant that I enjoyed this one.

Overall, if you’ve read other Parr novels, you’ll enjoy this one. If you haven’t – this isn’t a bad place to start. Enjoy. I did.

They’ll always have Paris…if they can both stay alive

CIA Agent Alejandro Cardenas fell for her the moment he took a pratfall in front of the Arc de Triomphe, a ploy to distract the guys tailing her. The action-packed but romantic protection assignment led to a steamy six-year affair, after which they parted, knowing they were soul mates, perfect for each other – except that each was married to someone else.

Ten years after Paris, Alex, now a widower, is retired from the CIA. Julia, the beautiful lady from Paris, is a founding partner of a Chicago investment firm, currently handling the IPO for a Miami-based conglomerate. But the conglomerate is secretly owned by the Cuban government, which has used it for decades to launder the ill-gotten gains of a vast criminal empire that includes drug smuggling, revolution for hire, and numerous other nefarious activities.

Julia’s rising financial stardom – along with Alex’s influence – bring her a high-profile position in the Cuban-American community, but when a pair of Cuban generals undertake a massive assassination plot, Alex realizes he has placed her in danger. To protect the love of his life, he comes out of retirement and assembles the Alpha Team, a deadly tactical force of former associates.

As suave as he is deadly, Alex is a charming companion, whether author Parr is treating us to a tour of Parisian nightlife or a sampling of delectable Miami specialties. If you like political action thrillers like those by Brad Thor, James Rosone and Miranda Watson, Vince Flynn, and Robert Ludlum, you’ll love Owen Parr!