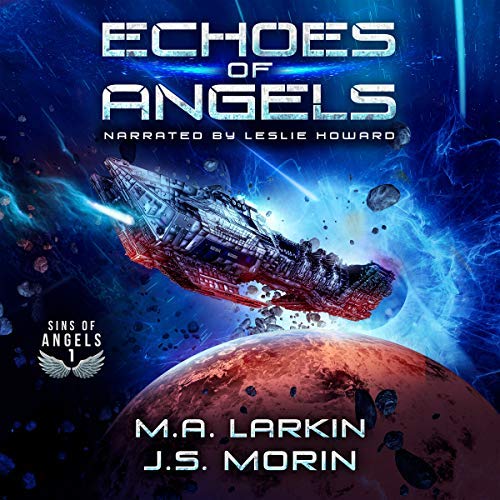 The Beginning of an Epic Space Opera

Sometimes you sit on a book for absolutely no good reason.  As a reviewer you get caught up in new books every week – ask any of us, our TBR piles could bury us alive. Sometimes I’m glad a lot of my books are digital only because I would be suffocating under them by now. Echoes of Angels was one of those books for me.  I had a big backlog when it was submitted and I wasn’t doing a ton of Sci-Fi at that point since I’d read a couple that burned me out.

As with most books like this, I started off confused.  There are people, races, worlds, and a time period that you have to figure out.  After a while, we find out that it’s more than 3000 years since the fall of Earth.  Once we figure that out, we realize we’re in the year 5000+ since they started the years over since then. So, with that in mind – everything is fair game.  We could have figured a ton of stuff out in 3000 years.

There was some cool tech, gadgets, and ships in Echoes and I have a feeling that they are holding out on some of the truly cool stuff for the later books in the series.

Overall, it was a book that I slept on – but you shouldn’t make that mistake.  Check out Echoes of Angels and jump into the series.

This was the first book that I’ve ever listened to that Leslie Howard voices and I thought she crushed it.  I never once thought “who is that” or “what is going on?” Her narration lent itself perfectly to this series and helped me get even deeper into it.  She voices the action scenes with intensity and the quieter scenes differently.  Really helping move the book along.

After millennia of oppressive dogma, one rebellious woman seeks to change it all and spark a galactic enlightenment.

When Rachel Jordan dares to question the ancient beliefs governing her world, she finds herself alone. For refusing to conform, the inquisitors have branded her a heretic. Redeemers have hunted her to a remote corner of the universe, intent on forcing her back into obedience.

But she isn’t hiding.

Armed with proof that the angels who saved mankind weren’t angels at all, she will break this cycle and bring freedom to humanity!

Echoes of Angels is the first book of Sins of Angels, an epic space opera series set 3,000 years after the fall of Earth. With the scope of Dune and the adventurous spirit of Indiana Jones, Sins of Angels delivers a conflict that spans galaxies and rests on the spirit of a single brave researcher. Follow the complete saga, and watch as the fate of our species hangs in the balance.