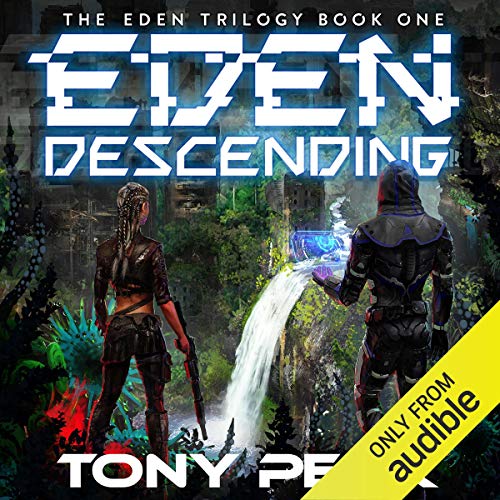 When I saw this, I couldn’t remember if I’d read another book by Peak or not. I went back and saw that I read and reviewed Signal when it came out, and enjoyed it. I’m glad I can go back into his work and listen some more with Eden Descending.

One of the things that jumps off the page is Peak’s ability to build really interesting characters and throw them into interesting worlds. Eden Descending started off throwing the reader right into it. I wasn’t sure what was going on, but I had to figure it out as I went. I think that confusion really added to the story though because even though the characters involved had some idea of what was going on – one of the points of the story was to figure out just how little they actually knew.

I love that this was a colonization/space invasion type story – but it was so much more. Peak was able to write a story that really dove into a lot of topics covering a range of things that were both sci-fi in nature and not. I won’t go too deep into them because I don’t want to shade your reading of the story with my opinions, but it was interesting to see lots of topics being covered without pointing them out directly.

The story itself flew off the pages. Once I got over being confused in the first chapter or two and we went back out into the world – the story really picks up. Peak did a great job building in different pieces of trust (earned little by little) along with throwing scenes at the characters where they had to trust and interact and improvise. It really helped them jump off of the page and helped them feel more real.

I hadn’t heard anything from James Fouhey before I started Eden Descending, but I really enjoyed his performance. I thought it really added to the story and really helped bring the story to life. I’ll be on the lookout for more titles from him in the future.

Overall, I enjoyed Eden Descending, I thought that Peak wrote not only a book that peaked my attention, but also made me want to know what happened. The last time I was as confused as I was but also needed to know what was going to happen next was Nicholas Sansbury Smith’s first Hell Divers book. The world building and character creation really stuck out that I need to find out what happens in the series.

They hoped to create a paradise. Instead, they created hell.

Phoa was terraformed by nanite swarms for Earth’s colonists to create a beautiful, habitable world. But the swarms evolved, overran the planet, and two centuries later, threaten every living thing remaining on it.

Reyes, a scientist from Phoa’s last colonial enclave, and Thanata, a bioengineered hunter from a rival tribe, must work together to halt the Green: the massive swarm that absorbs plants, animals – even entire cities. But if the unlikely pair hopes to survive the mutated wilds and the deadly Green, they’ll have to learn to understand each other.