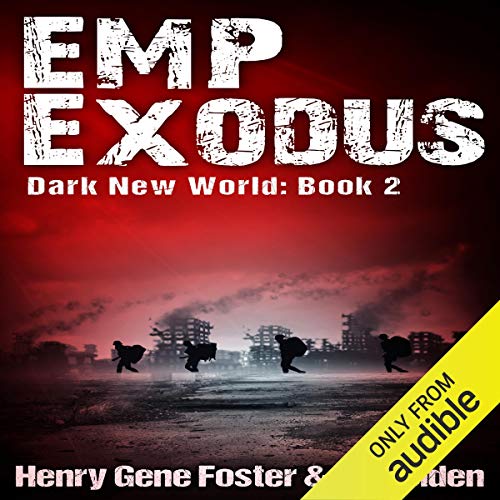 Cassie and team (or clan as they’ve taken to call themselves) are back at it again.  This time, they are traveling across the perilous countryside trying to get to her homestead outside of Lancaster, Pennsylvania.  Along the way, they will come across many problems, some external, and some internal.

The narration for EMP Exodus was done by Kevin Pierce.  If you are first time reader of my blog and read this review for the first time you don’t know how much I enjoy Pierce’s voice, especially for Prepper-type books.  He really has the perfect voice for the type of person that I imagine is a prepper.  Pierce’s voice allows for this story to just flow off of the page and into your ears.

EMP Exodus was enjoyable but finished just when the story started getting good!  Don’t get me wrong, the story was still good, but being a series book — it just ended when things were really getting interesting. Like I genuinely thought I had at least another hour left in the book when I hear “this concludes EMP Exodus..” I was shocked!

The book has a lot of internal struggle in it.  Both within the group and within certain members of the clan.  I found that to be really interesting and I found myself really invested in these characters.  I know that some of them were from the first book, but it was nice to get an even deeper dive into their views.  You don’t normally get that in the second book in a series.

If all three are available (as long as the third finishes the series), I would definitely try to line them up and listen to them in order.  The stories really play off of each other and this one picks up right where the first book left off.  And I know that the third book will do the same.

Overall, a really enjoyable prepper book filled with internal struggles and a lot of prepper knowledge and instinct narrated by the wonderful Kevin Pierce.

Cassy has joined with Frank and his group, and the group members declare themselves a clan, pitting themselves as a group against the rising tide of darkness around them. Then the death of one of their own creates new tensions that may tear the clan apart before it ever reaches the promised oasis of Cassy’s homestead farm.

Worse, they are followed by a man bent on their destruction, who would take her farm for his own group if he can find it. As the clan continues its trek, invaders solidify their iron grip over the Eastern Seaboard, opposed by a resistance aided by a mysterious group known only as “the 20s”, whose identities and ultimate goals remain unknown. Events begin to unfold that will determine the future of Cassy and her new family, and possibly the future of America.