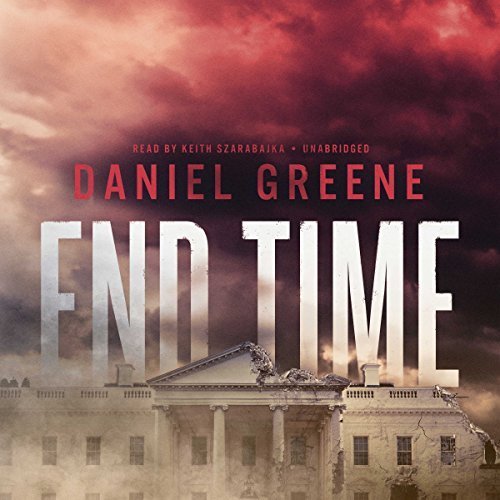 A Post-Apocalyptic Military Thriller (with Zombies)

This is the first “zombie” post-apocalyptic book I’ve read in quite a while.  It reminded me a lot of The Extinction Cycle series by Nicholas Sansbury Smith (who I believe was quoted saying something about really enjoying this book when it was originally released in 2016).  It’s part military thriller and part post-apocalyptic story with a whole lot of zombie action in it.  There were scenes that reminded me of 28 Days Later and others that reminded me of The Walking Dead – so if you’re a fan of either of those – you’d probably enjoy End Time.

The narration by Szarabajka was interesting – there were times that I was cringing and others where I thought it was perfect.  It was a little overperformed for my liking (when someone yelled he yelled).  It just makes listening in a car hard – you never know the volume to keep the book.  It wouldn’t have made me dislike the book though – just something to watch out for if you’re sensitive to random outbursts from narrators. His inflections were great though and made a sometimes “straight-laced” book feel more interesting.

My wife went to school in DC, so it was interesting to watch the zombies grow and affect regions that I have been and walked before.  That was easily my favorite part of End Time and will be the most memorable the next time we go back.  I also liked that it was supposed to have come from a virus – I’m a sucker for books that start out like this and that’s where my comparison to 28 Days Later really comes into play.

The scenes with the zombies (and the characters trying to outsmart them) were really well written.  I enjoyed these the most and I thought that Greene did an especially good job writing both fear and courage into some of them.

I started and stopped this one a few times.  And at times I had a hard time digging into this one.  Not for lack of good writing or storytelling – it just wasn’t sitting right with me.  After finishing it, I still can’t really tell what it was.  I think I’ll need to get into the other books to figure out if it was just something that was going on with me personally while reading this or if the books had something in them that bugged me.

I also have to point out that I think Blackstone did a wonderful job with the new cover on this book – the cover itself really drew me in (more than the non-audiobook one would have).

Overall, it’s no Extinction Cycle, but End Time is an enjoyable zombie book.  I will be curious what happens in the next two books and will probably pick up the next one once it’s released – even if it’s just to hear Szarabajka tell the story.

The protests in front of the embassy aren’t what they seem….

In the dark, primal jungles of the Congo Basin, something is ravaging the local population. When protests turn violent in front of the US embassy in Kinshasa, only the foreign policy experts paid attention. Civil war erupts, and people rip each other apart in the streets of the African capital.

To avert disaster and preserve its self-image, an overwhelmed State Department dispatches a team of elite counterterrorism agents to bring their besieged people back alive. Mark Steele, a young agent within the division, and his team of gritty operatives are used to trudging through the worst society has to offer, all while operating from the shadows. But Steele’s team is plunging headlong into a maelstrom of death so much worse than rebels in the streets.

A highly contagious microbe is spreading unchecked, killing everyone in its wake only to bring them back again as the ravenous undead. Only a lone CDC virologist understands the extent of the outbreak at hand. He cowers among the embassy staff praying for extraction from the hands of death, fearing his part to play in the epidemic.

Follow this harrowing tale of survival, duty, love and horror as the living dead bring the world to its knees. The first installment of an epic series, End Time starts as a slow burn that turns into a breakneck-paced struggle for survival. Greene does an excellent job of depicting individual stories within the larger scope of the global epidemic. Enter the End Time.