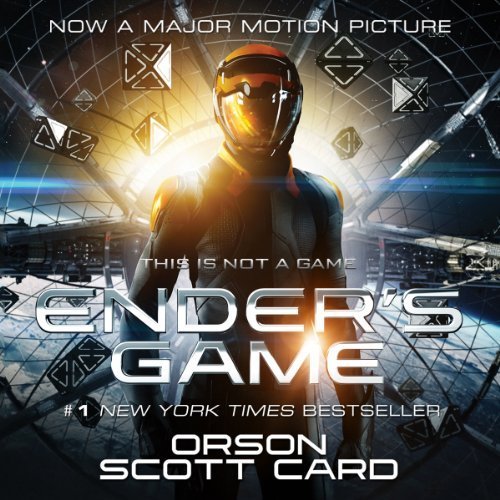 This book is as old as I am, and I’m not really sure how that makes me feel.  I knew that this was “classic” science fiction, but I honestly didn’t know when it was written.  I’ve heard a little about this book just since it’s a classic, but I honestly went into this completely blind.  I wanted to read an older science fiction book that I didn’t read when I was younger, and this was in my Audible queue.

The narration was done by a trio of people who all do a really nice job. I’m honestly not sure who narrated most of it, but he has a deep and booming voice.  I found the difference between how Ender’s voice probably was and the narration to be an interesting choice, but the subject matter of the book makes it an obvious one.  All three narrators do a great job though.  I can tell that Macmillan put some thought into this newer audiobook version.

I’m really glad that I picked this up.  I wasn’t sure what I was jumping into, but it was a ride from beginning to end.  I can tell that this book was written for a younger audience than myself, but I still found myself really enjoying it.  And honestly, for as young as the main character (and an audience) is — this book had some violence in it.

The character of Ender was so perfectly written.  The perfect mix of his brother and sister.  A “third” that no one cared about.  Who had empathy but also had limits.  Who would only hurt someone if they pushed him too far?  Also, apparently the perfect candidate that everyone on Earth will need to depend on.  Oh yeah, and he’s only a child.  Not even 10 yet when they start to train him.

The final hour or so of the book really blew my mind.  I won’t ruin or spoil anything (I mean, even if I do, the book is how old now?) But, honestly after Ender finishes his training — my mind was blown.  Card really pulled a number on me, all these years later he had me totally tricked.  I knew something was going to happen, but I didn’t expect what did.

For the perfect holiday gift for the reader on your list, pick up this special gift edition of one of the most beloved Science Fiction novels ever written.

Andrew "Ender" Wiggin thinks he is playing computer simulated war games at the Battle School; he is, in fact, engaged in something far more desperate. Ender is the most talented result of Earth's desperate quest to create the military genius that the planet needs in its all-out war with an alien enemy.

Is Ender the general Earth needs? The only way to find out is to throw the child into ever harsher training, to chip away and find the diamond inside, or destroy him utterly. Ender Wiggin is six years old when it begins. He will grow up fast.
But Ender is not the only result of the experiment. The war with the Formics has been raging for a hundred years, and the quest for the perfect general has been underway for almost as long. Ender's two older siblings, Peter and Valentine, are every bit as unusual as he is, but in very different ways.

Between the three of them lie the abilities to remake a world. If, that is, the world survives.