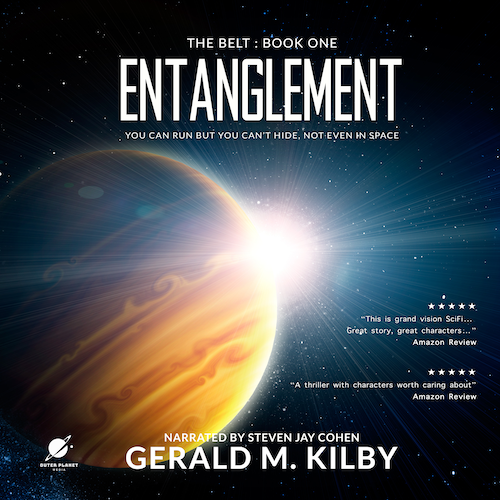 I FLEW Through Entanglement

I haven’t picked up a really good Sci-Fi book in a while and it’s books like Entanglement that make me question that. My biggest issue with Entanglement is honestly how to spell it. I’ve already written in three times in this review and I’ve honestly misspelled it every. single. time. Apparently, I’m not good at Englishing sometimes.

The story (see what I did here, I’m not going to type it again unless I have to) was about a group of not-so-normal astronauts who were sent out for five years to survey one of the asteroid belts.  They are is three years into a five-year-long survey when they come across a ship, but unfortunately for them, it isn’t just any ship, but one that is classified with classified cargo onboard.

This jumpstarts an insanely fast-paced story that has the crew of the Hermes bouncing all over space running from space pirates, governments, and more.

I’ve had Kilby on my TBR pile for far too long and I’m a little disappointed in myself now.  Entanglement was a fantastic book from beginning to end and it really kept my attention.  Every time I sat down and had nothing to do for more than five minutes, including waiting for my wife to come in from the kitchen – I would put this book on.  I ended up flying through it in about 2-3 days and I’m glad I did. It was a fascinating read from beginning to end.

I particularly liked Commander Scott McNabb – he was one of your antihero types.  He was running from debt.  Debt you later find out had nothing to do with him. He’s also a slight pushover and his crew knows it.  The scenes about halfway through when they start to respect him were particularly enjoyable to me.

Overall, I thought that Entanglement was a super enjoyable read.  I’m not sure what will happen in the next book(s) but I have a pretty good idea where it’ll start. Kilby is a master science fiction writer.

Steven Jay Cohen narrated this one and absolutely crushes it.  He was able to voice each character differently without feeling forced.  I particularly liked his voicing of both of the QI (think AI but in quantum instead of regular computers).  These were two characters that weren’t in your face for the full story (especially Solomon) but he still voiced them in unforgettable ways.

I won’t get too into it or spoil it, but I love that the one QI’s name was Solomon. It’s an excellent use of what that name is associated with and I tip my hat to Kilby for it!

You can run but you can’t hide — not even in space.

Commander Scott McNabb, of the science vessel Hermes, is three years into a five-year-long survey of the asteroid belt. It’s an excruciatingly dull mission, yet it keeps him far away from the agencies that are chasing him down. However, his fortunes change, along with the other four crew, when they discover a derelict spaceship in orbit around a binary asteroid. Scott’s share of the salvage would be enough to clear his name and start a new life.

But the ship contains an experimental quantum device, lost while en route to Europa, and ownership of this technology could fundamentally change the balance of power within the solar system. Now that word is out of its discovery, the Hermes finds itself being hunted down by the very people Scott has spent so much time and effort hiding from.

If Scott wants any hope of a new life, then he’s going to have to fight for it. Yet, after a lifetime of running and hiding, he’s not sure if he has what it takes—maybe he really is just one of life's losers. Then again, there is a deep river of rage welling up inside him, born out of a lifetime of countless accumulated injustices, each one inching him ever closer to the edge—and this could be the one that finally makes him snap.