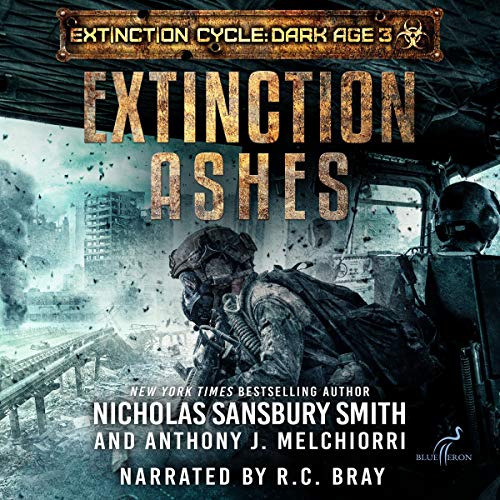 NSS and Melchiorri did it again with Extinction Ashes. This is the third book in the Extinction Cycle: Dark Age series and it was a doozy. The action starts pretty much right away and we’re thrown into the world of variants and collaborators and those who are fighting to bring them down.

As with every other book I’ve listened to by these authors – this one really brings the emotion. There are scenes when people don’t make it and scenes when things aren’t going the soldiers way – and you feel it.  Nick and Anthony are able to add this twinge of “what if” to every scenario and it’s scary.

Reading this while the Coronavirus/COVID-19 is spreading was surreal. It’s scary when they talk about being safe every night and just the original spread. I completely understand that the man-made virus is this series is different, but there are still parallels. Honestly, there was a point in the book that Nick’s former job seemed to come out. I was driving when I got to that point or I would have bookmarked it so I could find the part and highlight it, but I didn’t get the chance.

Throw in another great performance by R.C. Bray and this is a fantastic book in a great series. One that I’ve enjoyed from beginning to end. One that I have a hard time putting down once I pick it up. I hope that they continue to write more books in this series but I don’t know what the future holds.

Overall, I loved this book. I thought it was one of the best in the series because it dealt with more human emotions than the other two. The other two books involve more of the masterminds and the webbing, where this book seemed to dabble in almost the aftermath (not there yet) but the “okay, now what” feelings that you get once things seem to have settled down (though I say settle down with a huge grain of salt since they weren’t really calm).

The ashes have fallen and the dust clears to a startling discovery….

Beyond the reach of the nuclear infernos, the masterminds survived and continue their assault on outposts across the Allied States. Timothy Temper and Sergeant Ruckley narrowly escaped one of those attacks. On the run from hostile forces, they fight to get an urgent message to command – the monsters aren’t the only threat. Their human allies have a nuclear weapon.

Refusing to hide underground, President Jan Ringgold heads to New York. Doctor Kate Lovato and her team are there working to infiltrate and sabotage enemy communications. To buy them time, S.M. Fischer and his engineers deploy technology to detect incoming Variant attacks. But they can’t hold the monsters for much longer.

Deep in enemy territory, Master Sergeant Fitzpatrick and Captain Beckham discover the terrifying truth behind the New Gods and a plan even more nefarious than eliminating the human race. This time, the future depends not just on the survival of Team Ghost, but their ability to convince new allies to join the fight before it’s too late.