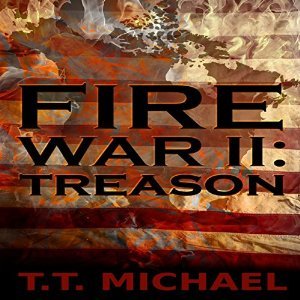 How far will Jackson go to protect his family?

Fire War II picks up where Fire War left off.  So there will be some spoilers in this review.

Anthony Jackson’s daughter has been taken, and he is now tasked with being the go-to guy on the Presidential security team.  He quickly finds himself in a position to help both the Apocolytes or the President.  He must choose who he wants to help and how much he is willing to risk to help them.

The narration for Fire War II: Treason was done by Patrick Freeman, who narrated the first book.  He does a wonderful job with this and makes the story just fly off of the pages and into your ears.  I really found myself enjoying the story more because Freeman was narrating it.  He did a great job.

The story was really good, part dystopian and part political thriller — Fire War II really had me going throughout.  It reminded me a bit of Fahrenheit 451 and 1984 (two books I absolutely love).  There was a lot of sneaking around and doing what the government was trying to stop him from doing.

Anthony Jackson the character is believable. He’s ex-military and a total BA, but he’s able to have a heart and care for his family and children.  When he broke down, I wanted to break down.  He was written that well.

Overall, Fire War II: Treason was a really enjoyable read.  If you read the first book and enjoyed it you will definitely want to check out the second one.

Anthony Jackson, military veteran, member of the Presidential security team, father, husband, patriot, and spy. His daughter safely recovered from a government detention center, Jackson’s role as a spy for the antigovernment Apocolyte group is firmly cemented. All he needs to do is keep his head down, do his job, and get intel back to his rebel handler. But as Jackson’s suspicions about President Meyers are proven true, and the tasks he’s asked to handle become more and more immoral, his loyalties are becoming strained.

Where is the line between truth and lie? Between loyal citizen and blind follower? Between right and wrong? And who gets to draw that line? The Apocolytes are growing stronger, but Meyers is too, and only one of them can be the bad guy. But which? Jackson needs to choose sides, and he needs to do it fast. But in the end, only the biggest tragedy of them all can force his hand.

His life will never be the same, his family will never survive, and his ideals can be shattered or overturned. Assassinations are all part of the job; he’s always dealt in lies and secrets. But now there’s something much more personal on the line: vengeance. Saving the world from terrorists is no big deal, knowing who the terrorists are is the real trick.

Perhaps you wouldn’t characterize the Finance Manager of your local automobile dealership as an Amazon best-selling author—until you get to know T.T. Michael. He has worked for the past decade at a Toyota Dealership in Illinois, but he is in the driver’s seat as the writer of, Fire War, a political thriller set in the year 2076. See what happens when the United States, Canada, and Mexico all join forces to make one super country. See more about him and his book Fire War at www.ttmichael.com

Sweet Virginia (Out Of Line Collection)