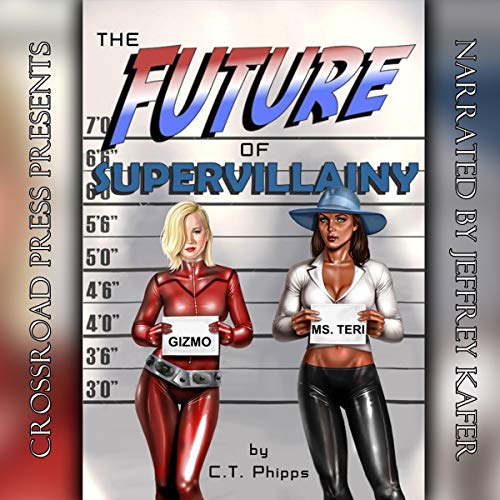 Phipps Has Done It Again

I honestly haven’t read a book this fast in a long time.  Thankfully it was a holiday weekend and I was able to devote more reading time on a Sunday (last Sunday before the NFL is back) than I usually can. I absolutely flew through Future of Supervillainy.  Phipps has done it again!

If you enjoy pop culture references that are as dated as you are and a supervillain who isn’t very good at being super and villainous – then Merciless and the Supervillainy series is definitely for you.  Every time there was a reference made to a movie, game, or music I chuckled.  Every. Single. Time.  I haven’t read a book that had me cracking up like this since the last Phipps Supervillainy book.

Also, Phipps throws in some references about himself.  How meta.  But in all honesty – it works.  The lines were funny and were basically him making fun of himself for his writing style.

There’s a special treat when Jane the Weredeer shows up in the early chapters (that just made me want another book in her series). And of course lots of other references and characters from Phipps’ other works).

The story in Future was and interesting one.  It had a Journey to the Center of the Earth vibe (I’m almost positive that’s what he was going for) with an obvious Phipps twist. I can’t really talk too much about it without too many spoilers. Just know you’re in for a crazy story with plot twists and “I did not see that coming”s throughout.

Phipps is easily one of my favorite authors working today and with Future he continues to cement himself in my brain. It’s also good to know that I’m not the only dork who spits out pop-culture references like it’s his job.

My Reviews of the other books in this series:

Gary Karkofsky, A.K.A Merciless, the supervillainy without mercy, has decided to retire from Supervillainy. He's lost too many friends and killed too many people (though they all had it coming). Unfortunately, this proves to be easier said than done when the department of supernatural services (DOSS) shows up to arrest him for all of his crimes. Quickly landing himself in more trouble, he decides to get out of town and help a struggling underground kingdom in the center of the Earth. What he finds is an army of Nazis, gods, lost temples, and dinosaurs. He also is forced to fight once more against the world's first supervillain: Tom Terror, archenemy of heroes everywhere.

He just can't catch a break, can he?