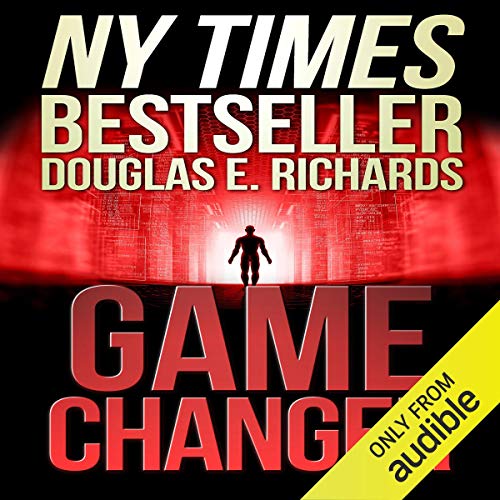 Richards fills the seat that the late Crichton left vacant

How much would the world change if people could learn a life’s worth of knowledge in a few minutes?  That’s what Game Changer takes a look at.  Unfortunately, as with all things that can change the world for the better, it can also change it for the worse. Game Changer looks at the possible misuses as it follows a Secret Service agent who attempts to kill the president because of  a memory he had of the President torturing and killing his wife… but the details are fuzzy.  If I go any more into the details of the story, I will spoil it for you!

Joe Hempel provides the narration for this and what a wonderful job he does.  Hempel was able to give voice to a fast-paced and non-stop book without even breaking stride.  His accents weren’t distracting and didn’t take me out of the story at all, they actually added to the book more.  I believe that this was Hempel’s biggest book to date (both length and potential audience) and he absolutely knocks it out of the park.

Phew, I’m still coming down from this book.  I just finished it a few minutes ago and I can’t believe the amount of action, knowledge, and science that Richards packed into Game Changer.  15 hours is a little out of my comfort zone, but with Hempel at the helm, the pages and hours just flew by.  I honestly don’t remember a book that I’ve enjoyed this much since reading books by the late Michael Crichton.

Game Changer really messed with my head.  The science in it was very “oh wow, this could happen” and I found myself thinking that over and over.  I think the sign of an excellent Technothriller is that “what if” feeling.  If you can make me feel like this is possible, it makes the book that much better.  Richards is the king of this.  Every book I’ve read by him left me feeling a little scared for the future (in the best way possible).

I honestly can’t talk much about the actual details in the book because it will ruin some surprises and twists.  But, I can promise you that there isn’t a dull moment.  A period out of place.  Or a sentence that was un-needed.  In my opinion, Richards is the new king of Technothrillers.  Taking a spot that was left vacant by Crichton.

The breathtaking new technothriller from the New York Times best-selling author of Wired.

What if it were possible to upload years of knowledge into your mind in hours? To become an expert in multiple scientific fields, become an MD, or learn several languages – in a single day? The benefit to humanity would be immense. But so would the danger….

Rachel Howard is a brilliant neuroscientist trying to make this capability a reality. But when she crosses paths with Kevin Quinn, a Secret Service agent desperately trying to kill the president, she finds herself at the epicenter of an insidious plot. A plot centered on the ultimate technological game changer. An utterly disruptive scientific breakthrough with the greatest power to transform civilization the world has ever seen.

Along with breakneck action and unexpected twists, Game Changer explores the fascinating inner world of our minds and takes a stunningly unique look at how science might someday be used to make profound alterations to the human psyche – for better or worse.

Disruption by Chuck Barrett (Narrated by

One thought on “Game Changer by Douglas E. Richards (Narrated by Joe Hempel)”