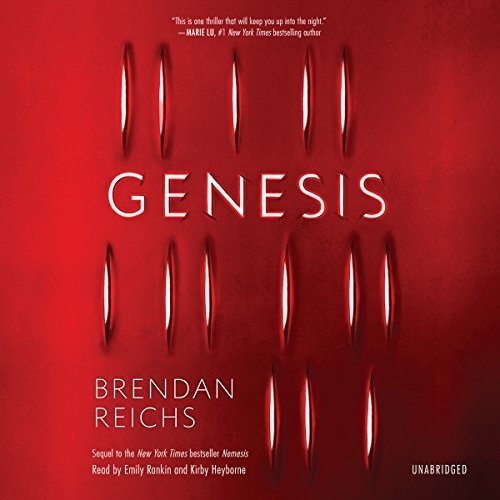 This is the second and I assume the final book in this series and it does not disappoint. Genesis continues along nicely right after the first book’s ending. There are many big reveals and revelations along the way that help us understand the logic and backstory. It makes you love some characters and hate others. At times, you could even hate some of those lovable characters which makes this audiobook have some depth.

I enjoyed the continuing dual point of views and narration. It allowed us to see things from different vantage points. This audiobook gets really intense at times and is light-hearted at others. The ending is worth the wait as I really enjoyed it.

There is not much to say about the narration other than steady as she goes. Both performers do a fantastic job of staying consistent with the characters from the first book. They also use many of the same tactics as the first audiobook to add some flair to each character.

Genesis was a good conclusion to the series and I felt it was well done. There are times during the middle of the audiobook where I was yelling at the silliness of the characters but it all adds up in the end. I can even smell a little novella with these characters in the future as well because I feel there is more story to tell, however, if it ends here it would not ruin the series either. I can only hope.

Noah Livingston knows he is destined to survive.

The 64 members of Fire Lake’s sophomore class are trapped in a place where morals have no meaning and zero rules apply. But Noah’s deaths have trained him – hardened him – to lead the strongest into the future…whatever that may be. And at any cost.

In a violent world where brute force passes for leadership, it’s tempting to lay back and let everyone else battle it out. But Min’s instincts rebel against allowing others to decide who lives and who dies. She’s ready to fight for what she believes in. And against whomever might stand in her way.