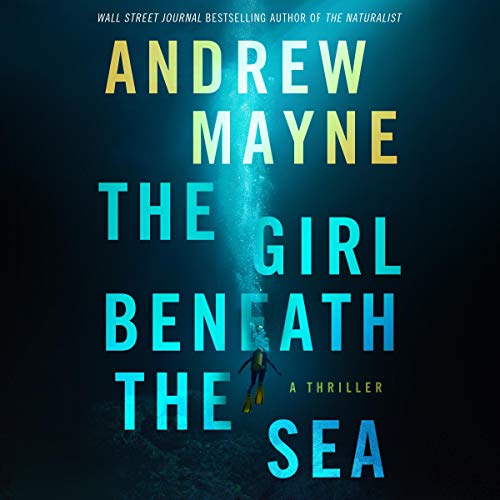 I’ve been a huge fan of Andrew Mayne for quite some time now (all the way back to Public Enemy Zero. I talk about the books in the Naturalist series often, recommending them to anyone who is asking for a serial killer thriller or a great mystery. So, when I saw that he had another book coming out – this time set in Florida and with investigative divers, I was already sold. Throw in the absolutely gorgeous cover art and I was hooked the moment I saw it.

Speaking of being hooked, the opening of this book hooked me and never let go, though I didn’t fight it. I knew within a few minutes that I was going to really enjoy this one, and I was right. Mayne’s name should be up there with the best Thriller writers today. He’s a master of his craft and writes books that feel real and keep you guessing.

The Girl Beneath The Sea has everything that someone would ask for. It had the feel of a blockbuster movie in the palm of your hands. It’s hard to talk about most of the book because after the opening scene – it’s all spoilers if I talk about it. Just know that you’re in for a lot of close calls, skepticism, and more. The McPherson’s are all characters, each and every one of them and they really add color to this story. Throw in the person who is trying to help Sloan and you have a buddy story you’d never expect.

I’ve never listened to any books by Susannah Jones but I thought she did a fantastic job. She was Sloan and I hope that if there are more books in this series that she’s able to narrate those titles.

For a Florida police diver, danger rises to the surface in an adventurous thriller by the Wall Street Journal bestselling author of The Naturalist.

Coming from scandalous Florida treasure hunters and drug smugglers, Sloan McPherson is forging her own path, for herself and for her daughter, out from under her family’s shadow. An auxiliary officer for Lauderdale Shores PD, she’s the go-to diver for evidence recovery. Then Sloan finds a fresh kill floating in a canal–a woman whose murky history collides with Sloan’s. Their troubling ties are making Sloan less a potential witness than a suspect. And her colleagues aren’t the only ones following every move she makes. So is the killer.

Stalked by an assassin, pitted against a ruthless cartel searching for a lost fortune, and under watch within her ranks, Sloan has only one ally: the legendary DEA agent who put Sloan’s uncle behind bars. He knows just how deep corruption runs–and the kind of danger Sloan is in. To stay alive, Sloan must stay one step ahead of her enemies–both known and unknown–and a growing conspiracy designed to pull her under.