Go Around by E.J. Noyes (Narrated by Abby Craden) 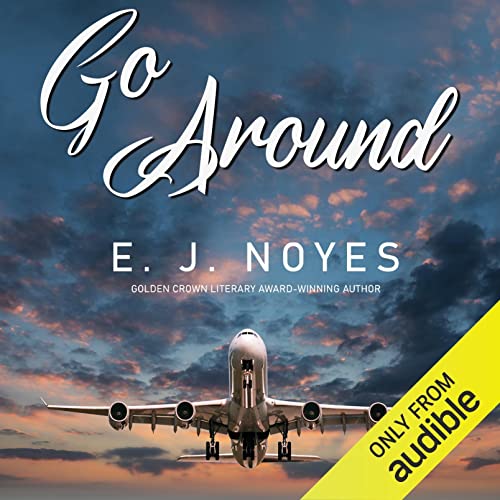 I rarely write a review JUST after finishing a book. I let it stew and marinate a bit before writing. But, the holidays are drawing near and I don’t want to have a bunch of reviews hanging over my head when I want to step back and relax a bit. So, Go Around… what an intense and intensely satisfying book. Noyes created a scenario and two women who were impossible to ignore. It was this big storm of emotions and things happening that I got completely taken away by its intensity.

This was not my first E.J. Noyes novel and for good reason. She’s able to create these amazing situations for the characters to grow and learn from. It’s always satisfying to finish one of their books. I feel like both characters are not only in a better place physically but they’re also there mentally and emotionally.

I will say/warn that Go Around, as mentioned above, is intense. But it likely contains some triggers around stalking, control, along with just that uneasy feeling people have around being watched. I don’t think that takes away from the book because Noyes does such a great job writing scenes that were deeply uncomfortable but I knew I had to get through them to find out what happened. Go Around was such an interesting book and shined some light on a side of fame I didn’t think of (but is in the news a lot).

Overall, a great book with lots of scenes for everyone. The intensely uncomfortable scenes were evened out by some steamy ones. And the unsure ones were evened out by the happy ones. It was such an easy read that I flew through it in a couple of sittings. Abby Craden, as always, knocks this one out of the park. Her performance was perfect for both Avery and Elise.

Sure, she’s not doing as fine as her ex – award-winning actress and current television it girl Elise Hayes – but Avery enjoys her work as a federal air marshal and also enjoys almost being over Elise walking out on their relationship 15 months ago. Then Elise is seated next to her on a flight, and the emotional progress Avery thought she’d made is reset in an instant.

Just like their first flight together, this one also has some bumps. But this time they don’t have to make a go around for a safe landing; they just have to deal with an overzealous fan threatening Elise. And when Elise comes begging for a place to stay until the stalker situation is resolved, Avery has to agree it’s the perfect solution to keep Elise safe. After all, nobody knows Elise Hayes used to have a girlfriend.

It’s only for a few weeks, what’s the harm? Except for some tiny issues, like when you’re still kind of in love with your ex and the mutual spark is as strong as ever, it’s easy to fall into familiar habits. Then there’s Elise’s apologies and genuine regret over leaving, which makes it hard for Avery to hold on to past hurts and sends her simmering emotions to a boil.

But love and sparks aren’t always enough. If Avery and Elise can find a way to move past everything that came between them last time, maybe they’ll get a chance to go around and try landing their relationship again.