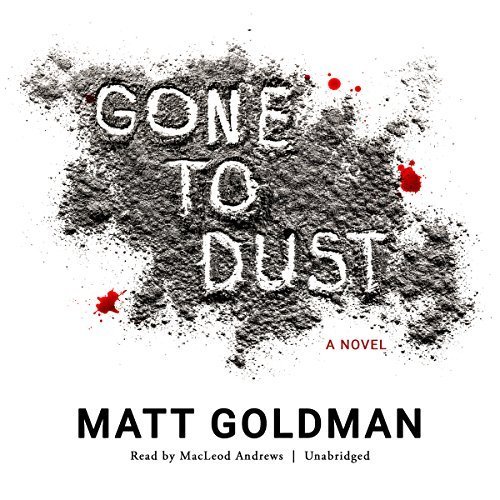 I read these books out of order and it didn’t seem to affect much of the story.  I knew a little bit about how Nils ended up (where he lived for example).  But it didn’t take away from the story at all.

Nils is a great leading character and I got a little more of his backstory in Gone To Dust (and I liked it a lot).  Goldman showed him as a deeply caring person.  The way that he wrote about his love for his ex-wife was touching and incredibly realistic.

Gone To Dust revolves around a murder of a woman with no signs of forced entry but the kicker is that the entire house is covered in dust from what appears to be hundreds of vacuum cleaners. A clever and interesting way to contaminate a murder scene and something that definitely made me perk up in the intro of this story.

The way that Nils goes about things is just something that I enjoy deeply. It seems to match up with how I want a murder investigation to go.  He, of course, runs into problems (bigger ones than I was expecting) but I like how he gets through them by basically ticking off all the facts that he knows to try and find another missing piece.

Goldman is a funny writer (along with an extremely talented mystery one). I found myself laughing numerous times during Gone To Dust, which doesn’t happen much in murder-mystery novels.  He jokes about the Minnesota weather, about “Minnesota friendly”, and other things that had me cracking up while also trying to figure out who did it.

The Minnesota setting, as I called out in the second books’ review, is a really nice change of pace. It’s just nice to not have this set in the same typical mystery settings like New York City, Miami, or Seattle. Being from a cold area I can relate to some of the mannerisms and issues that the people in this novel go through.  There were a few things you never hear/see in mystery’s not set in the cold like covering your tracks in a snowstorm and planning a murder around fresh snow (for the same reason).

Overall, I enjoyed this one quite a bit and I hope that there are more novels in this series.

A brutal crime. The ultimate cover-up. How do you solve a murder with no useable evidence?

Private detective Nils Shapiro is focused on forgetting his ex-wife and keeping warm during another Minneapolis winter when a former colleague, neighboring Edina Police Detective Anders Ellegaard, calls with the impossible.

Suburban divorcée Maggie Somerville was found murdered in her bedroom, her body covered with the dust from hundreds of emptied vacuum cleaner bags, all potential DNA evidence obscured by the calculating killer.

Digging into Maggie's cell-phone records, Nils finds that the most frequently called number belongs to a mysterious young woman whose true identity could shatter the Somerville family - but could she be guilty of murder?

After the FBI demands that Nils drop the case, Nils and Ellegaard are forced to take their investigation underground, where the case grows as murky as the contents of the vacuum cleaner bags. Is this a strange case of domestic violence or something with far-reaching, sinister implications?