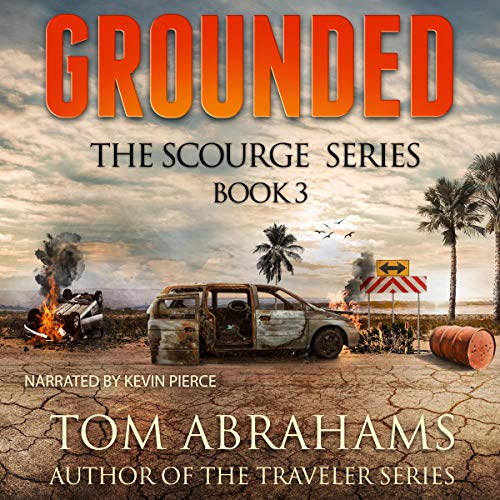 Abrahams is at the Top of His Game

Grounded is the third (…and final?) book in the Scourge series. Tom Abrahams was able to write a book that makes living through COVID-19 a little scarier. He was able to predict some of the things that we went through in the earlier books, and now, book three gets us one step closer to the end of the Scourge series and one step closer to the Traveler series. Marcus Battle is mentioned numerous times in this story but not in any way that I expected. I had completely forgot (until I started reading The Scourge) that Battle and one of the Cartel bosses served together. It adds a completely different element to these stories that I wasn’t expecting.

Grounded is able to cover a lot of ground (and water). Abrahams was able to write more topics into this one and cover different aspects from different points of view. He’s still showing how the Cartel got started (the ruthlessness and eager to kill anyone in their way). He’s able to show what the government did instead of stopping the Scourge. He also shows what seeking only revenge can do to you and how it clouds your judgement. He dabbles a little bit into changing yourself after the apocalypse as well.

The thing that I noticed was throughout the last third of the book Abrahams was trying to end things “nicely”. What I mean is that I could tell that certain story lines were ending and he was setting certain people up to be “okay”. AKA wrapping up the book and the series (at least as much as you can in an ever-changing world) while still giving the reader enough to either leave another book or finish up the story in their head.

I can’t tell if the story is over here or not. I think that Abrahams is done with it… for now. I think that he could revisit it, especially if we ask for more. What I’d really like to know/see is a check in on anyone who makes it in the time between the end of this book and the start of the first book in the Traveler series. There were so many good characters in this that checking in on any of them in the next 3-4 years would be interesting and would provide a unique look into the first years of the post-Scourge world as the Cartel sets up shop.

Get Grounded from Amazon for Kindle (free with Kindle Unlimited), or on Audible.

A mutating plague has killed two thirds of the world’s population. The new threats come from desperate survivors. And Mike Crenshaw is looking for solid ground on which to find safety and peace.

Grounded begins in the aftermath of The Scourge. Forced from what they thought was a safe haven, Mike Crenshaw and his friends embark on new journeys of faith, hoping against hope they reunite with lost family and find sanctuary.

At the same time, a government lab has found the key to unlocking a new version of The Scourge, one that might threaten to kill those who somehow survived its first unstoppable sweep across the globe.

And a new version of what was once Texas is beginning to form under the thumb of ruthless tyrants who call themselves the Cartel.

It’s a heart-pounding addition to a story that will keep you up at night with the lights on and the doors locked.