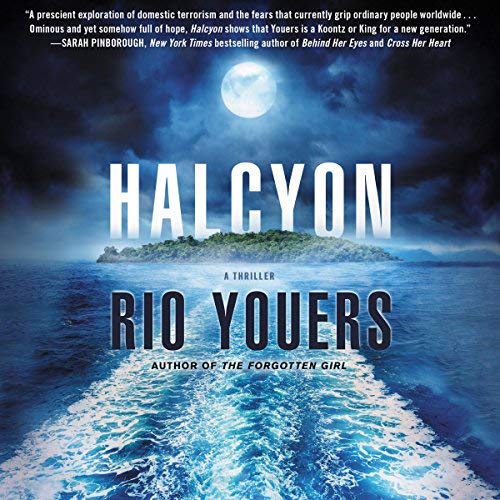 I love that the numerous definitions of Halcyon make sense to this story.  The adjective means: “denoting a period of time in the past that was idyllically happy and peaceful.” As a noun it can mean “a mythical bird said by ancient writers to breed in a nest floating at sea at the winter solstice, charming the wind and waves into calm.” I won’t ruin too much of the story but both of these make sense with the story that Youers wrote.

Halcyon tells of an island getaway in the expansive Lake Ontario that is a place for loners and lost souls to go to recharge their batteries and get off the grid to return to a simpler way of life.

I tweeted about this book the other day when I was about 90% through it and said:

I’m almost done with Halcyon by @Rio_Youers – wow is it a crescendo of a book. Completely building towards the ending. 90ish percent done. Hoping to finish and review it before 9am tomorrow.

“wow is it a crescendo of a book. Completely building towards the ending. 90ish percent done”.  I’ve read a lot of books and most of them build towards the ending.  None of them had the build-up that Youers wrote into this one.  I obviously won’t write what happened and why I think that, but wow. Not, just what an ending but what a build-up and intense finish.

It’s really hard to talk about the things I want to talk about – the opening and first maybe 30% or so told the story of the Lovegrove family and their internal struggles.  Little did I know just how much this was going to set the stage for the rest of the book – but Youers could have written numerous books based on the opening of this one. I’m glad he wrote Halcyon though.

I live near and work in Buffalo and one of the first major places that something bad happens is downtown.  I was surprised at the accuracy and the thought that he put into getting street names and locations correct. I live 10 minutes from Lake Ontario so every scene that took place made sense and really felt like it was happening outside my house.  I’ll definitely never look at an island in the middle of the lake the same again.

Overall, a book that builds and builds and builds to a crashing finale that I won’t be able to forget for a long time.  I’m writing it now that I’ve gone halfway through the year.  A definite contender for the best book I’ve read this year.

Halcyon is the answer for all Americans who want to escape, but paradise isn't what it seems. A beautiful island in the middle of Lake Ontario - a self-sustaining community made up of people who want to live without fear, crime, or greed. Halcyon is run by Valerie Kemp, aka Mother Moon, benevolent and altruistic on the outside, but hiding an unimaginable darkness inside. She has dedicated her life to the pursuit of Glam Moon, a place of eternal beauty and healing. And she believes the pathway there can only be found at the end of pleasure.

On the heels of tragedy, Martin Lovegrove moves his family to Halcyon. A couple of months, he tells himself, to retreat from the chaos and grind. He soon begins to suspect there is something beneath Halcyon’s perfect veneer and sets out to discover the truth - however terrible it might be - behind the island and its mysterious founder, Mother Moon.

One thought on “Halcyon by Rio Youers (Narrated by George Newbern)”