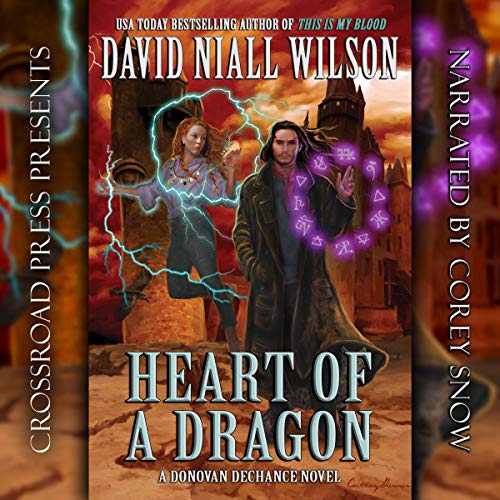 Captured Me From The Very Beginning

On of the first things I noticed about Heart of a Dragon was its length.  I’m a fan of fantasy but I’m not a fan of the epic 600-800 page epic fantasy novels though I honestly haven’t given one try in a long time.  But, reading the description of Wilson’s work had me skeptical that he was going to be able to pull off the things written in the synopsis. Well, I love to be proven wrong because boy was I. Wilson packed everything he wrote about and, a lot more into this novel.  He was able to write detailed descriptions of people, places, and things without going overboard.  His writing specifically around the mage was top notch – making me feel like I knew him as a person and not just a character in a book.

Having not known anything about Wilson, DeChance, or really anything related to this story other than reading the synopsis – I thought that it was written in such a way that makes it a stand-alone novel.  I don’t know if that was his plan – but being a complete newbie to this series and author – I felt like I was at an understanding with Wilson almost immediately. That’s not easy to do, especially in the fantasy genre, so kudos!

The overall vibe of this book is reminiscent of some of the books I’ve read by C.T. Phipps (I know this was written before those stories were, but the vibe was similar).  Not in the completely over the top and funny ways, but this book, even in the first few minutes had me laughing.  Wilson’s descriptors had me smiling throughout and the character building and overall fantasy world-building was also top notch.

This is the first (and hopefully not the last) novel by Wilson that I’ve read.  I honestly liked everything about this book – I can’t really find anything to complain about so I’m not going to dig. It was action-packed and a definite page-turner.

Corey Snow’s narration was also top notch. I had absolutely no issues and thought that he allowed the story to fly off of the pages and into my ears.  He gave each character a fair shake without being overly-dramatic.

Donovan DeChance is a collector of ancient manuscripts and books, a practicing mage, and a private investigator. Over the span of a long life, he has gathered and archived the largest occult library in the world.

When a local houngan begins meddling with powers she may not be able to control, a turf war breaks out between the Dragons motorcycle club and the Los Escorpiones street gang – a war that threatens to open portals between worlds and destroy the city in the process.

With his lover, Amethyst, his familiar, Cleo – an Egyptian Mau the size of a small bobcat – the dubious aid of a Mexican sorcerer named Martinez and the budding gifts of a young artist named Salvatore, DeChance begins a race against time, magic, and almost certain death.

The fate of the city rests on his success, and on the rare talent of a boy who walks in two worlds, and dreams of dragons.

Heart of a Dragon by David Niall Wilson
Narrator: Corey Snow
Length: 8 hrs and 14 mins
Series: DeChance Chronicles #1
Published by Crossroad Press on May 11th 2011
Genres: Fantasy
Format: Audiobook
Buy From Amazon
Buy from Audible
Also by this author: Tales of Yog-Sothoth, Tales of the Al-Azif