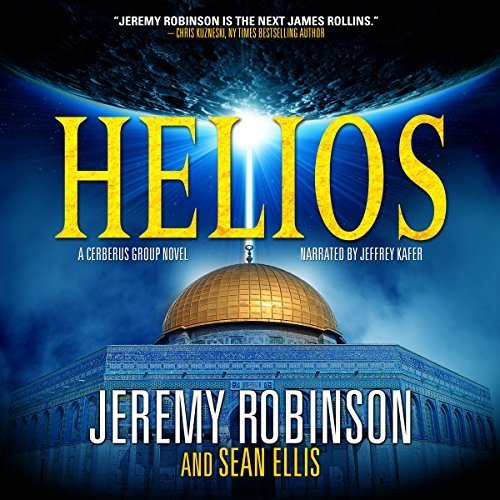 This was a crazy book from beginning to end.  I did read the first book in the series and it felt a bit confusing to start but then settled into a nice groove.  Helios was similar but Robinson and Ellis just bounced all over the place and didn’t include one history lesson/relic/era in this book – the hodgepodged them together to make this crazy adventure book that had the Herculean Society bouncing across the globe.

The irony is that all of the pop culture things that I would compare this book to, they included in the book.  It’s very Indiana Jones thrown into the world of Assassin’s Creed with a little Tomb Raider thrown in there.  If Robinson and Ellis aren’t gamers I’d be a little shocked. Some of the characters “origin” stories came from watching Indiana Jones as a kid.  A nice way to tie int he Jones references into Helios.

This was a little different than most Adventure books because they throw in a bit of a Sci-Fi vibe to it. There’s an over-arching story that involves space and satellites.  They included some cool autonomous equipment, too – which I enjoyed.

Jeffrey Kafer provided the voice for this one and I’m glad he did.  There’s something about when he works with Robinson that just makes it work.

Overall, I thought that Helios was an enjoyable adventure thrill-ride from beginning to end.  I flew through this one and I’m glad I picked it up.  It didn’t disappoint me and I hope if you pick it up it doesn’t disappoint you either.

The beginning of the end

A deadly swarm of earthquakes shakes the planet. In the sky above, the sun appears to stand still. While the world reels from the vast destruction, George Pierce and the Cerberus Group, a team of scientific and historical experts, uncover an imminent threat straight out of history that must be stopped. But not everyone wants them to succeed.

An apocalyptic death cult, made up of suicidal martyrs and true believers who will do whatever it takes to ensure the destruction of all life on Earth, goes head-to-head with a billionaire tech genius commanding an army of robots, on a quest to own the sun itself.

Caught in the middle, the Cerberus Group must fend off both sides while traveling to every corner of the map, and into the depths of myth and history, to find the holiest treasure on Earth - an artifact that can harness the power of creation. The prophecies are true.

The end is nigh.

Jeremy Robinson and Sean Ellis, the international best-selling team behind the Jack Sigler thrillers, including Cannibal and Empire, continue the new series that rewrites the way we see history. Rivaling the best of Matthew Reilly and James Rollins, Helios combines a blistering pace with fringe science and myths reborn.

Also by this author: Hunger, From Above, Herculean, Viking Tomorrow, Exile, Bloodstorm
Also in this series: Herculean