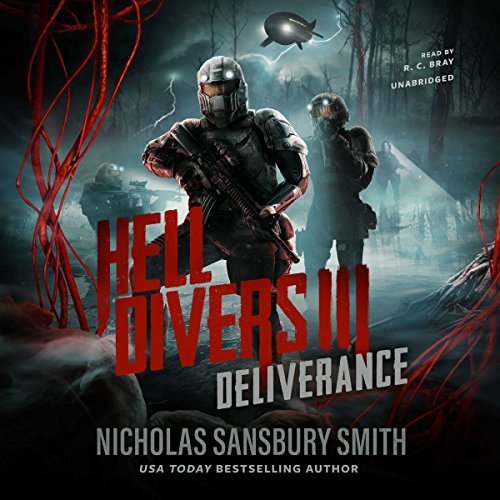 Tugged At My Emotions

The month of May needs to cool it a bit.  I’ve read more great books at the start of May than I think I did in all of 2018.  My biggest bummer is that technically the series could end now – but I think Smith has another book in the works.  But it’s literally in the works – meaning I’ll have to wait probably another year until I get Hell Divers 4.

Warning – my review of Hell Divers 3: Deliverance will most likely contain spoilers to the other two books.  Obviously being the third book in a series – if you’re reading this review before checking out book 1 – just do yourself a favor – grab it in audio and enjoy.  Don’t even read on.  Okay, now that I’ve gotten rid of the Hell Divers newbies (those who would most likely die on their first dive) let’s dive into the review (pun intended).

Deliverance tells the continued story of the airship trying to survive, the Hell Divers who dive so that humanity survives, X’s life on the surface, along with Tin’s continued survival and search for X. Without ruining the book – that’s what it’s about.  There was a lot going on in this one, but it was a friggin blast to read from beginning to end.

Smith has a way of writing that really draws your emotions out.  You feel for X, Tim, the lower-deckers on the ship.  You also feel hatred for the captain and the things that he’s done to X, Tin, and the people on the ship. Normally a book can tear at my heartstrings but Smith found a way to make me emotionally invested in these characters.  Sure, he throws in a dog that I cannot get enough of to sucker me more, but I was hooked without the dog.

I want to describe a scene but I know it’ll ruin a large reveal – but needless to say – there was a scene about 70ish percent through the book where there was finally a reveal.  It had me grinning from ear to ear and I think I actually made an audible noise when it happened.  I was so excited.  I didn’t want to get out of my car and go to work.

R.C. Bray is masterful at his craft.  Hell Divers III was no different.  He voices X perfectly (even his changing voice throughout this story) and was able to add another level to a book that I didn’t think could get any better.

If you’ve somehow ignored my plea to not read this before reading the first book and are still on the fence – what are you waiting for.  Take the dive!

They will dive, but will humanity survive?

Left for dead on the nightmarish surface of the planet, Commander Michael Everhart and his team of Hell Divers barely escape with their lives aboard a new airship called Deliverance. After learning that Xavier “X” Rodriguez may still be alive, they mount a rescue mission for the long-lost hero.

In the skies, the Hive is falling apart, but Captain Jordan is more determined than ever to keep humanity in their outdated lifeboat. He will do whatever it takes to keep the ship in the air – even murder. But when he learns the Hell Divers he exiled have found Deliverance, he changes course for a new mission – find the divers, kill them, and make their new ship his own.

In the third installment of the Hell Divers series, Michael and his fellow divers fight across the mutated landscape in search of X. But what they find will change everything.