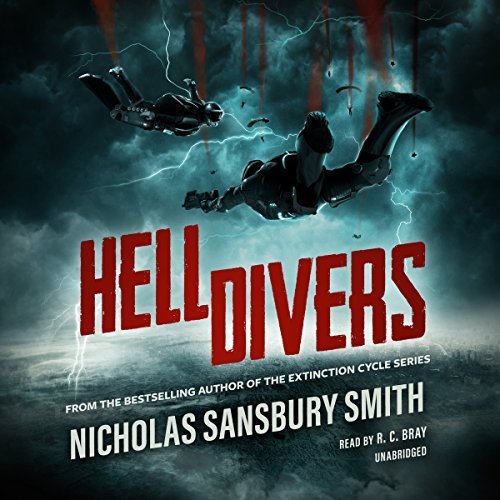 Memorable Story and Characters from a Master Storyteller

I listened to about 80% of this with my wife while we did a 6-hour drive to see a friend for his son’s birthday.  I put it on as she was falling asleep since I figured she wouldn’t like it.  I couldn’t have been more wrong.  The combination of Bray’s voice and Smith’s writing kept her awake the entire way down and back (which if you knew her in cars you would know that was a big feat!)

Hell Divers tells the story of a poisoned Earth that humanity has destroyed. We basically bombed ourselves out of our own homes and things on Earth are really bad.  If you were to stand there (and not die from radiation poisoning) and look up through the electrical storms you might catch a glance of the airships that have been the home of X and the crew for the last century or so.  X is a Hell Diver — a group of elite men and women who dive back to Earth risking life and limb to collect much-needed parts and equipment to keep the airship afloat.

Holy crap was this an exhilarating story.  There wasn’t a lot of time to catch your breath as you blew through pages wondering if X and his team were going to make it out of different situations.  There were a ton of things that I liked about this book but the few standout moments include the description of a Hell Divers jump expectancy (15) compared to how many X has completed (over 90 I believe it was).  Along with the interaction between X and his friend’s son towards the end of the book (an incredibly heart-warming part of the book).  These two specific parts stood out to me, but honestly, this book will be in my memory for quite some time.

It doesn’t hurt to have one of the best voices in the audiobook industry record your audiobook either. R.C. Bray does a phenomenal job narrating this story and made the minutes fly by. I couldn’t believe that we were at my friend’s house already — the time really flew by.

Overall, Hell Divers will be a book I remember for a while, and thanks to the Facebook Live video that I saw with Smith and Bray where Bray reads the intro to book 2 I decided to push this book up in my queue and give it a shot.  Now I’m eagerly awaiting Hell Divers 2’s release date.

More than two centuries after World War III poisoned the planet, the final bastion of humanity lives on massive airships circling the globe in search of a habitable area to call home. Aging and outdated, most of the ships plummeted back to Earth long ago. The only thing keeping the two surviving lifeboats in the sky are Hell Divers – men and women who risk their lives by skydiving to the surface to scavenge for parts the ships desperately need.

When one of the remaining airships is damaged in an electrical storm, a Hell Diver team is deployed to a hostile zone called Hades. But there’s something down there far worse than the mutated creatures discovered on dives in the past – something that threatens the fragile future of humanity.