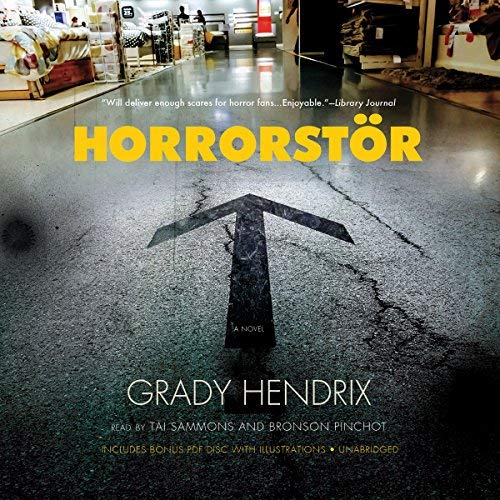 I know that Horrostor isn’t really a comedy, but it’s completely valuable to the genre in similar ways that I think Shaun of the Dead was as well.  Shaun was able to cover a lot of the same things that you saw in Romero-like zombie films but did it in a funny way.  I thought that Horrorstor was similar in that aspect. It pays perfect homage to the haunted house feeling but moves it into an Ikea-like place.

Horrorstor was just so preciously enjoyable.  I ravenously enjoyed listening to it.  Every moment I could listen to a few minutes I would.  I needed to know what was going to happen to the people and to this store.  There were elements that just surprised the heck out of me and there were moments that you felt like “oh yeah, I saw that coming” but in the end – you couldn’t really predict it.  Hendrix was able to write it in a way that felt familiar but that’s what made it even more unrelenting and in the end, made me feel uneasy (in a good way) while listening to it.

The character development (I’m including the store as a character here) was second-to-none.  I thought that it was perfect – enough that you felt like you knew them and also enough the root for (or against) them. I love when a book is able to do that without spending page after page giving a details description of a persons back story.

The little cutscenes between each chapter were perfect. And if you stopped paying close attention the ones further into the book were funnier and funnier.

I’ve never read anything from Hendrix before this and happened to get it as a Chirp deal (Bookbub’s dive into audiobooks) and I’m SUPER glad I picked it up.  It’s a super well produced Blackstone title with a narrator I’ve listened to a lot (Pinchot) and one I’ve never listened to before that I will be checking out after this one (Sammons). Back to Hendrix – I realized that another book that I kept seeing in my twitter feed was a book of his (We Sold Our Souls). And I’ll probably be quickly adding that book to my TBR pile.

The Blackstone cover of this audiobook really grabbed my attention – I had no idea what it was about but it really dragged me in.  It’s completely opposite of the ebook and paperback edition which is bright and looks like the IKEA catalog (on purpose).  I don’t know if I would have bought it with the brighter cover or not.  The dark cover (I still know I’m in a store) really helped to set the tone for me, though.

A traditional haunted house story in a contemporary setting, and full of current fears, Horrorstör delivers a high-concept premise in a unique style.

Something strange is happening at the Orsk furniture superstore in Cleveland. Every morning, employees arrive to find broken Kjërring bookshelves, shattered Glans water goblets, and smashed Liripip wardrobes—clearly someone, or something, is up to no good. To unravel the mystery, five young employees volunteer for a long dusk-till-dawn shift and encounter horrors that defy imagination. Along the way, author Grady Hendrix infuses sly social commentary on the nature of work in the new twenty-first-century economy.

A traditional haunted house story in a contemporary setting, and full of current fears, Horrorstör delivers a high-concept premise in a unique style.