Hour of the Assassin by Matthew Quirk (Narrated by Will Damron) 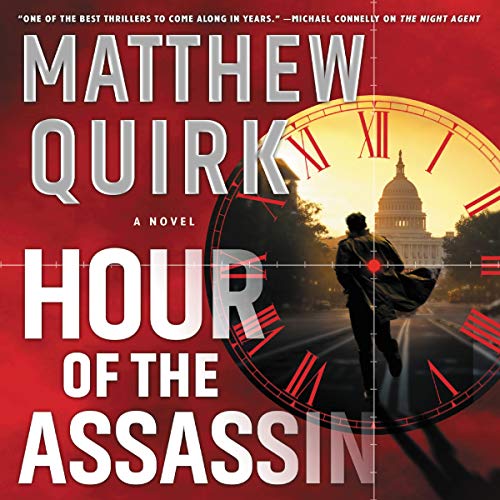 This book absolutely flew by. Matthew Quirk is a master author that sucked me in within the first few pages and wouldn’t let me go. I wasn’t 100% sure what this book was going to be about, when I see a cover and a title like this that I like I try really hard not to spoil it for myself. So, I didn’t even read the synopsis. I went into it blind and I’m glad that I did. Hour of the Assassin surprised me around every turn.

This was one of those books that talks a lot about the darker side of politics that the average Joe’s and Jane’s of the world don’t see. The dark money, the puppet strings, and the “it’s understood, so it’s not quid pro quo” type deals. But it was so much more. Nick Averose was one of those characters that you couldn’t help but like. He was a good person who did his job well and ended up being sucked into an insane story and an even more insane plot to frame him.

Hour of the Assassin was a fast-paced thriller that I couldn’t put down. Each chapter brought more and more intrigue and with more intrigue it had me wondering how Averose was ever going to make it out of this with his life intact. If you like stories about DC power players, assassins, and things hiding in the shadows (but also hiding in plain site) then this book is for you.

Throw in the fanastic narration by Will Damron and this story is an easy five-star for me. It flew by and I kept finding myself listening longer and longer to figure out what was going to happen.  Definitely a book that I had a hard time putting down. I hope that there are more stories from Quirk, either in this series or another one like it because I need more Averose in my life.

“Quirk has earned his spot in the front ranks of thriller writers. Opens with a bang and keeps exploding for three hundred pages.” (David Baldacci, New York Times best-selling author of A Minute to Midnight)

Framed and on the run for his life, a former Secret Service agent discovers how far some men will go to grasp the highest office in the land in this electrifying tale from the author of The Night Agent – a propulsive political thriller reminiscent of the best early Baldacci and Grisham novels.

As a Secret Service agent, Nick Averose spent a decade protecting the most powerful men and women in America and developed a unique gift: the ability to think like an assassin. Now, he uses that skill in a little-known but crucial job. As a “red teamer”, he poses as a threat, testing the security around our highest officials to find vulnerabilities – before our enemies can. He is a mock killer, capable of slipping past even the best defenses.

His latest assignment is to assess the security surrounding the former CIA director at his DC area home. But soon after he breaches the man’s study, the home’s inner sanctum, Nick finds himself entangled in a vicious crime that will shake Washington to its foundations – as all the evidence points to Nick.

Nick knows he’s the perfect scapegoat. But who is framing him, and why? To clear his name, he must find the truth – a search that leads to a dark conspiracy whose roots stretch back decades. The prize is the most powerful position in the world: the Oval Office.

To save himself and the people he loves, Nick must stop the men who rule Washington before they bury him along with their secrets.

“This one is a gritty, intense political thriller, filled with nuance and dire exploits. Totally entertaining. A treat from start to finish.” (Steve Berry, author of The Malta Exchange)

The Cabin by John Koloen (Narrated by St