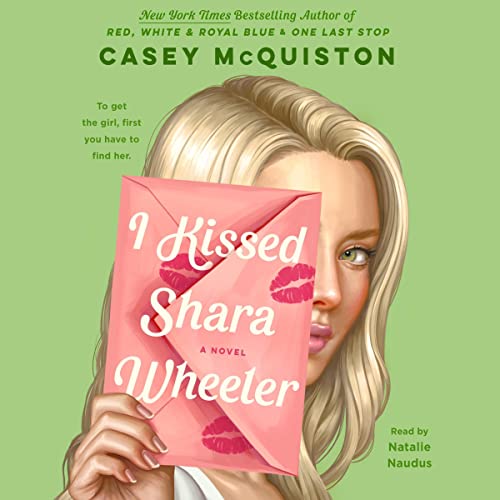 A Coming Of Age With A Ton of Heart

I FLEW through McQuiston’s last book, One Last Stop, last summer and when I saw that this was coming out I had to give it a try. Now, I went into this one basically knowing how good her last book was and didn’t read too much into what this was. As I started listening to it I saw that McQuiston was a best-seller with this one and for good reason.

I Kissed Shara Wheeler was like a few books combined into one. It starts off as a “where is Shara” type book. There are a lot of clues and they have to work together to find her – but as it continues, it turns into a coming-of-age story that has a ton of heart. I looked down at one point because I thought the book was over, but it was only about 75%. The last 25% really took a more intimate direction and covered topics that I remember wanted to tackle way back when I was in high school (mumbles) years ago.

Natalie Naudus absolutely nails this. She is able to really get that teenage snarkiness without being overdone. If I see she’s performing a book, especially a sapphic fiction – I’m sold. I know she’s going to crush the narration and I Kissed Shara Wheeler was no different.

Overall, as expected, another wonderful book that blew my already high expectations out of the water.

From the New York Times best-selling author of One Last Stop and Red, White & Royal Blue comes a debut YA romantic comedy about chasing down what you want, only to find what you need…

Chloe Green is so close to winning. After her moms moved her from SoCal to Alabama for high school, she’s spent the past four years dodging gossipy classmates and a puritanical administration at Willowgrove Christian Academy. The thing that’s kept her going: winning valedictorian. Her only rival: prom queen Shara Wheeler, the principal’s perfect progeny.

But a month before graduation, Shara kisses Chloe and vanishes.

On a furious hunt for answers, Chloe discovers she’s not the only one Shara kissed. There’s also Smith, Shara’s longtime quarterback sweetheart, and Rory, Shara’s bad boy neighbor with a crush. The three have nothing in common except Shara and the annoyingly cryptic notes she left behind, but together they must untangle Shara’s trail of clues and find her. It’ll be worth it if Chloe can drag Shara back before graduation to beat her fair and square.

Thrown into an unlikely alliance, chasing a ghost through parties, break-ins, puzzles, and secrets revealed on monogrammed stationery, Chloe starts to suspect there might be more to this small town than she thought. And maybe—probably not, but maybe—more to Shara, too.

Fierce, funny, and frank, Casey McQuiston’s I Kissed Shara Wheeler is about breaking the rules, getting messy, and finding love in unexpected places.

Table for Two by Kate Gavin (Narrated by