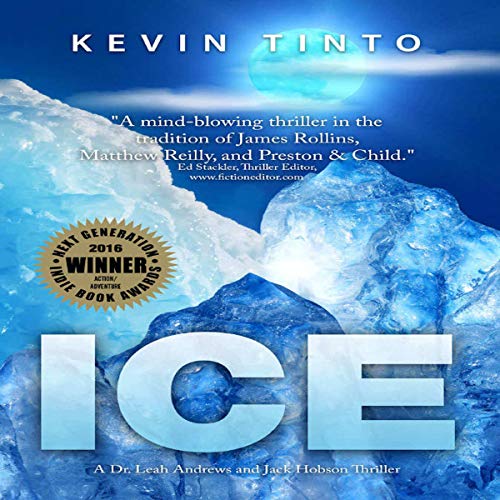 Ice has been a book on my list for quite some time, but it was never available in audiobook — until recently. I was excited when I saw it was coming out in October and I featured it in my New and Notable post the week that it came out.

Ice was one of those books that at its heart has the feeling of a great adventure book, similar to Indiana Jones movies and books by David Wood, James Rollins, and Preston & Child. But it had a science fiction twist that even I didn’t see coming near the end. I won’t spoil it, but let me say that the book went from feeling like a straight up adventure novel to feeling a little bit like a dream. I was trying to explain what happened to my wife and it felt like trying to explain a dream. And then this happened, but that kind of makes sense but sounds crazy as I say it out loud. Now, I don’t say that to say that the book or the ending didn’t make sense. It did, but without mentioning the twist here, it’s something you’ll likely not see coming.

The storytelling really stands out in Ice. Tinto does a great job building up the tension and allowing the story to flow from one place to another without getting bogged down in too many details or too much “and it looked like this”. Each place was brilliantly described but not in a text-dump-way. Tinto was also great at creating characters that felt real but also were likeable and ones that were easy to root for. Leah Andrews is easily one of the stars of the book and every scene with her in it jumps off of the page.

Throw in great narration by a seasoned-pilot-turned-narrator, Pamela Almand knocks this one out of the park. She became Leah, but also didn’t drop the ball when it came to the male characters in the book. Sometimes narrators try too hard to do the opposite sex and it sounds bad. Almand didn’t and it was one of the first things I noticed. She really helped keep the pace that Tinto set and allowed the book to just fly off of the pages and into my ear.

We are writing with some fabulous news! Ice has been named the Winner in the action/adventure category of the 2016 Next Generation Indie Book Awards. Congratulations!”

The debut best seller that has sold more than 400,000 Kindle and paperback versions!

Archaeologist Leah Andrews stumbles upon something inexplicable in southwestern New Mexico: Inside a dark cavern lies an undiscovered, Native American cliff dwelling abandoned for 800 years. While twisting through one of the narrow underground passageways, Leah’s flashlight illuminates the remains of a violent massacre.

Ancient human remains – all slaughtered in a long-ago massacre – cover the cavern floor, along with several brilliantly colored, granite crystals. The rare gems are native to only one place on earth: A frozen mountain range in central Antarctica.

Could Native Americans have traveled to the frozen continent of Antarctica 800 years before the first known human exploration? If so, how? And why?

There’s only one person who can get Leah to those mountains in Antarctica: Her estranged husband and climbing guide Jack Hobson.

At their destination, they make a stunning discovery that will change history and science forever. But Leah’s team is far from the only interested party.

As her secret makes its way to the highest levels of government, a race to seize the Russian-claimed Antarctic territory brings the world to the brink of nuclear conflict.