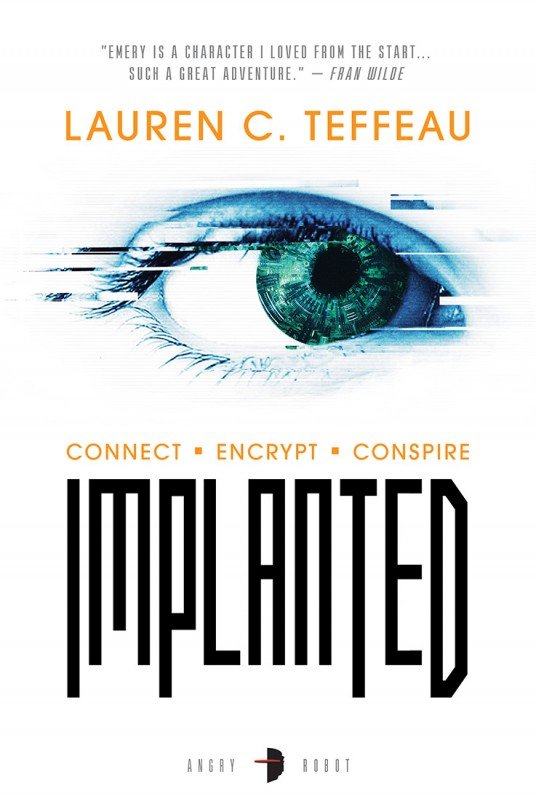 This is the second ARC I’ve gotten from Angry Robot and it’s another enjoyable read.  Implanted tells the story of Emery.  A typical college kid living in a dome near the city formerly known as Fort Worth. She’s been playing arcade games with a guy that she’s falling for and might even want to connect with him on a deeper level when everything in her life falls out of place.  She’s thrown into a hidden and secretive world where her entire former life is erased and she’s forced to start over. What she finds out would chill your blood and make you want to crawl in your bed and stay there forever.

Looking at the synopsis of this book – I can tell that it’s okay to talk about the major part of the book without it being a spoiler.  Emery is enlisted as a messenger- but not just any messenger – all of her messages will be encoded into her DNA and then decoded once she arrives at her destination. I’ve heard/watched/read other things related to this but Teffeau really took it to the next level.

Speaking of next level – the world building inside of Implanted is amazing.  There were a few parts that feel overdone (or just reused in stories like this) like everyone cannot be bothered to look up from their devices – now that the devices are in their heads.  But it was a needed part of the story and I thought that Teffeau did a good job explaining the world of implants and what they have done for us in the near-future.

Everyone is looking forward to Emergence – aka when the domed walls/glass comes down.  And a lot of the story revolves around that.  But Teffeau throws in some class struggles, along with non-conformity issues too.  I think this book might be aimed at high school aged readers and the way that it was presented would do really well with that audience.

Implanted definitely hooked me early and kept me interested.  I wasn’t sure where it was going but I had some ideas.  Some of the things I guessed early on and others surprised me.  I’m happy to know that I couldn’t predict the entire book from beginning to end.

Semi-spoiler (not really, just want to point it out for those Dystopian haters for this exact reason): I’m also pleased to say that there is NOT a love triangle in this (thank god). And the love/intimacy/trust part of this was earned not given.  It was a long hall and I respect the heck out of Teffeau for writing it this way. I won’t mention how long a certain thing that’s teased early on takes – but it was atypical for this genre.

Overall, a book that I can write this much about has to do something for me.  Sure, there were some typical tropes used – but it was done in such a way that made it an enjoyable read.  The tagline drew me in and I couldn’t let go.  I enjoyed this near-future sci-fi thriller a good deal.

The data stored in her blood can save a city on the brink... or destroy it, in this gripping cyberpunk thriller

When college student Emery Driscoll is blackmailed into being a courier for a clandestine organisation, she's cut off from the neural implant community which binds the domed city of New Worth together. Her new employers exploit her rare condition which allows her to carry encoded data in her blood, and train her to transport secrets throughout the troubled city. New Worth is on the brink of Emergence - freedom from the dome - but not everyone wants to leave. Then a data drop goes bad, and Emery is caught between factions: those who want her blood, and those who just want her dead.