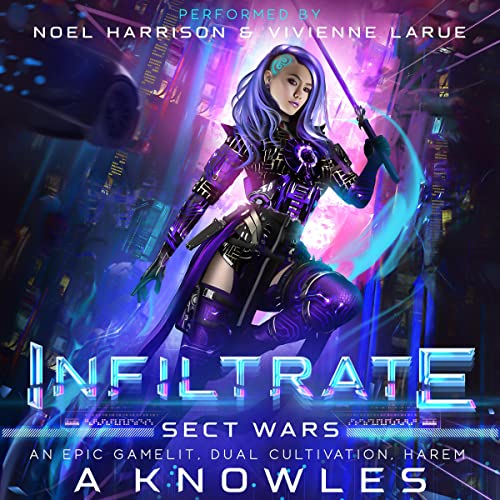 Great Story From Beginning To End

I did NOT know that Infiltrate was going to be a duet narration – this is one of the first ones I’ve read. It’s definitely the first one that’s in the romance category (where I believe it’s much more common).

I went into this one knowing that this was written by an author I enjoy but had some more adult parts to it – so I went in knowing it was more harem/romance than science fiction – but I will say – Knowles does a fantastic job writing a story that shines in both genres. And as the story progressed there were more romantic scenes but also had a lot of typical LitRPG/Sci-Fi scenes as well.  The action in this one picks up from the very start and doesn’t let up.

The thing that surprised me the most about this story was how compelling it really was. Sure there were harem parts and sure there was some sect fighting and manipulation but it was such a good story without all of those things. I don’t know why I’m so surprised by this since I know this author pretty well and I know that their work always leaves me feeling good when I finish their books. But this one was genuinely enjoyable from beginning to end. Knowles writes characters that were compelling and likable. But also put them into situations where no matter what happened I liked them even more after the situation they were in (trying not to spoil).

Speaking of the duet narration – Noel Harrison and Vivienne LaRue absolutely knock this one out of the park. I don’t think I’ve listened to any of the books they’ve performed before but I will be on the lookout for more books by them in the future. They both crushed this performance and really became the characters.

As a strong initiate of the Sawa sect, Kei never expected to be given the boot, while someone else cheated their way up the ladder.

But here he was, kicked out, speeding across the planet, with one chance left to prove himself: His mission to infiltrate the enemy sect, and steal what makes them the most powerful family on the planet.

Fail, and lose everything he’s ever strived for.

Fail, and lose the one thing he loves the most, his family.

For Kei, failure is just not an option.

Warning: This side series contains untraditional relationships and adult situations.

Cool for the Summer by Dahlia Adler (Nar