The Arrival by J. W. Brazier (Read by Elliot Schiff) 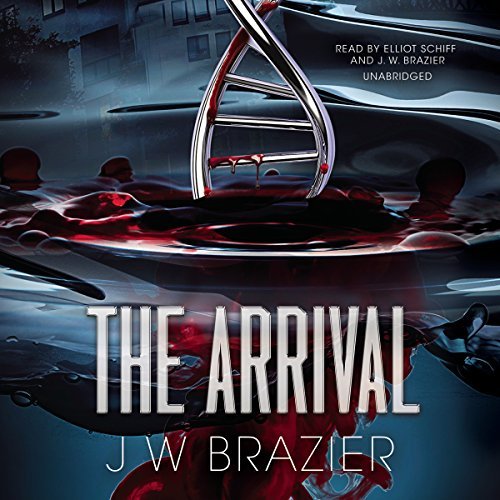 Mixing Ancient Issues with Modern Ones

A whirlwind story mixing an ancient hidden secret with modern issues.  The Arrival jumps from 1948 into the near future, taking the reader along for the ride.

Elliot Schiff does the narration for this, and I can tell that this is his first book.  It just felt under-done.  The book lacked some of the crescendo that was needed, but the narration fell just like the book did.  Authors, do some research, have them read a chapter, listen to other audiobooks in the same genre.  Narrators, don’t be turned off by me saying this.  Mr. Schiff – the same goes for you – I think that there is something there – I just feel like you didn’t hit the nail on the head with this one.  Some more work, maybe some smaller titles will do a lot for you.  Overall, the rating for this book was a combination of iffy narration and iffy writing.

I have to start my opinion part of this off by saying, I REALLY wanted to like this story.  I love the mix of the old with the new.  I liked the technology that the author was writing about.  I liked the “releasing something from the past that will be awakened later” idea that was written about.  What I didn’t like was the execution of this.  This story could have been great.  Really great in my opinion, but it just wasn’t.  This was one of those that the cover art sucked me in, the description kept me there, and the story just fell flat on the execution.

I felt as though the author was pushing some of their ideologies on the reader instead of just writing a story.  I think that I saw this described in other reviews as religious fiction—had I known or seen that I may have avoided this.  You can take ideologies of the past and write them to be great fiction (The DaVinci Code for example).

The book felt okay, it’s really one of the first books I’ve sat through in a long time that I would not recommend to other people.  Unless of course you are pretty religious and enjoy bio-thrillers.  That seems to be the demographic for this book.

This book was a bit too long for my taste too, but if some of the authors ideologies were removed (and I think a lot of them could have been taken out without changing the story drastically), this book would have been a much “cleaner” read.

I think there really is something here, but I think that Brazier just failed in the execution.  Hopefully another author sees this premise and can do something great with it.

Beneath a cloak of darkness and mystery, it has arrived.

Palestine, 1948. With the winds of war fast approaching, an unscrupulous archaeologist finally finds the remains of the man he’s been searching for, unwittingly releasing an ancient evil on the world.

White River, Arkansas, 1980. In a secret lab, top-level medical scientists work together to harness the power of a revolutionary new DNA manipulation technique. But when the project finally comes to fruition with the birth of a specially “designed” baby, it just as abruptly comes to a bloody halt. The facilities and nearly every member of the team are wiped out, silenced forever…almost.

White River, Arkansas, 2019. The small town awakens one morning to find itself ground zero of a joint UN-US terrorist training exercise. Residents face martial law, a cashless economy, and a host of ruthless leaders seemingly bent on making the maneuvers more than just a military operation. Outraged citizens begin to rise up and fight back, but it soon becomes clear that something evil has arrived in White River – a darkness unleashed on an unsuspecting world.