The Chronicles of Jegra: Gladiatrix of the Galaxy by Tristan Vick (Narrated by Veronica James) 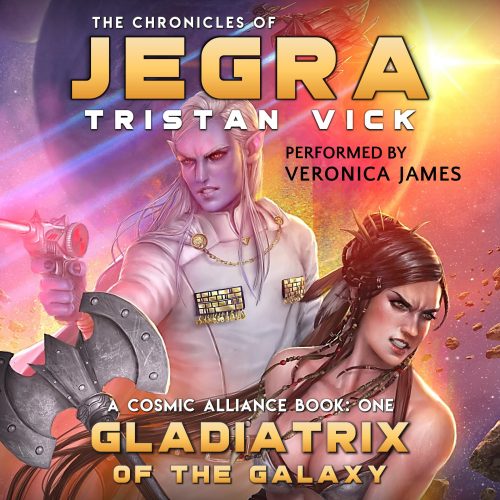 I honestly didn’t know what to think going into this.  The first few scenes are pretty obviously written by a guy. I thought “oh good, is this what I’m getting myself into?” but they did ease up a bit as the story progressed. That’s not to say that this isn’t still a funny and enjoyable book – just know if you’re going into it thinking that there will be a powerful woman you’re only partly right. After the opening scenes, I decided to go through some of the reviews (with titles like “A fun sexy space opera” and ‘An epic adult sci-fi fantasy”). They quickly helped me realize that this was going to be Sci-Fi sex comedy (think Road Trip or American Pie with battle scenes and in space).

I feel like Vick tried to write this book to be almost hyperbole when it came to the female perspective.  There is an already large endowed woman, who once is put on “alien steroids” as she comes to call them turns into an even more so endowed woman.  She talks about how she fights in basically no clothing since it just gets damaged and limits her range of motion (and the ratings go up when she fights like this). So, going into it knowing it was going to be stylized like this – made the book much more enjoyable for me.  If I’d gone into it with a different point of view this would have been a different review from me.

I liked where the story felt like it was going.  It had that space comedy appeal to it while also having some epic great space opera moments going on with some fantasy/alien worlds thrown in. I would say it’s a combination of that with some sprinkles of male-written “romantic” scenes that always seemed to get interrupted as to either keep this similar to Cinemax late night or to just keep it from being over-the-top “adult”.

I thought that Vick was able to build great characters and worlds.  He knows how to write action as well – there were times (especially early on) that it was no-holds-barred and then other times where the action was perfectly strung out to keep the suspense up.

I really flew through this book.  Vick throws a ton of words at you (I’m not sure of the final word count, but the book is 438 pages according to Amazon). I thought Veronica James did a great job performing this book. She really became the different characters (especially Jegra).  She allowed Vick’s words to come to life and really took this from just a story to a real performance.

Making her a slave to the arena was their first mistake. Underestimating her will be their last.

Aliens abducted her and sold her into the Intergalactic Gladiatorial Syndicate. Now, she’s fighting for her life on an alien world where she is reborn as Jegra, Gladiatrix of the Galaxy!

When the ruthless Lord Emperor Rhadamanthus Dakroth falls for the gladiatrix Jegra Alakandra, he decides to make her his new empress. But, after his ship is ambushed and destroyed, he is marooned on the desert moon with vicious assassins hot on his trail. Now, he has no choice but to turn to his bride-to-be for survival.

Fans of John Carter of Mars, Star Wars, and Red Sonja will have a lot to be excited about with this new sci-fi space opera where a woman made a slave discovers a greater destiny waiting for her in the stars.

From gladiatorial death matches to intergalactic war, The Chronicles of Jegra: Gladiatrix of the Galaxy is the first exciting chapter in the Cosmic Alliance Series!

Note: Contains a pansexual heroine, her transsexual girlfriend, and her bisexual polyamorous blue-skinned alien husband, some scenes of brutality, a bit of galactic alien sex, puritan knights of an ancient holy order, and giant glowing space squids made of nuclear energy that eat starships for breakfast.