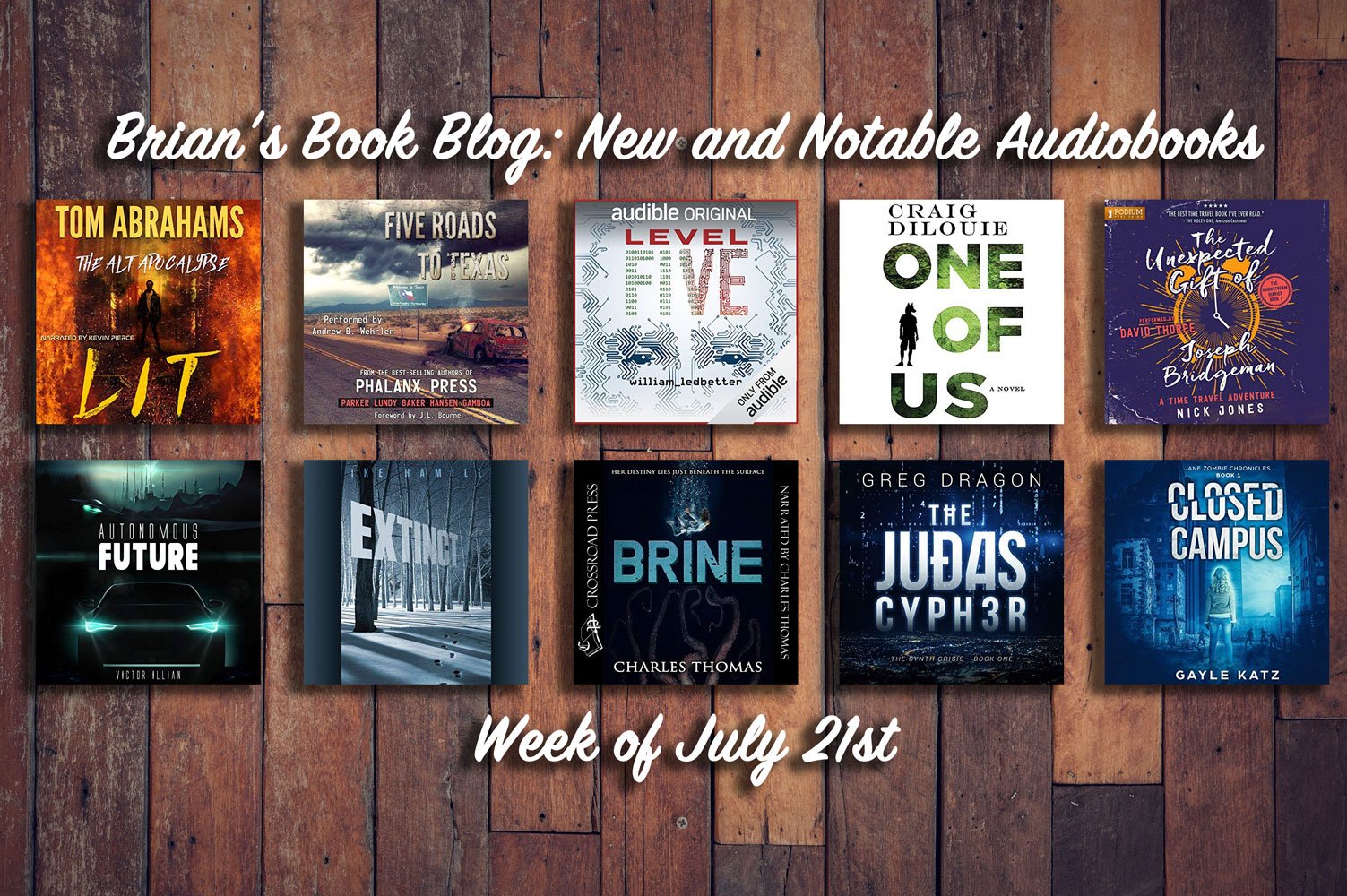 Welcome to Brian’s Book Blog’s weekly New and Notable Post for the Week of July 21st.  We share the 10 books from this week that caught our eye featuring Post-Apocalyptic, Horror, Sci-Fi, Thrillers, and more. Enjoy! 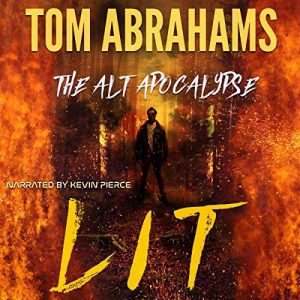 The Alt Apocalypse is the newest groundbreaking series from Tom Abrahams.

It explores survival under the most extreme circumstances, but with a twist (and no cliff-hangers).This series, which can be listened to in any order, features the same core characters in each complete story. But every book dunks them into a new alternate apocalypse: a nuclear holocaust, an earthquake, a flood, a wildfire, a hurricane, a plague, and even zombies.

Different heroes will emerge in each novel. Different characters will survive and perish. Your favorite character dies in one book? He or she will be back in the next. In the end you’ll unwind the loose thread that connects every character and every stand-alone story.

In Lit, Abrahams tells the story of a couple on a camping trip to the Angeles National Forest, a Los Angeles firefighter, a lonely fry cook, and a group of college students who struggle to escape and survive in Southern California after an unprecedented outbreak of wild and urban fires.

Can they escape the flames? Will they become heroes or run from danger? What will it take to end a fiery hell on earth? 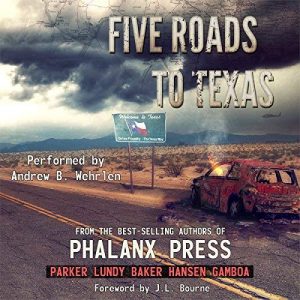 From the best storytellers of Phalanx Press comes a frightening tale of Armageddon.

It spread fast – no time to understand it – let alone learn how to fight it.

Once it reached you, it was too late. All you could do is run.

Rumored safe zones and potential for a cure drifted across the populace, forcing tough decisions to be made.

They say only the strong survive. Well, they forgot about the smart, the inventive, and the lucky.

Follow five different groups from across the USA as they make their way to what could be America’s last stand in the Lone Star State. 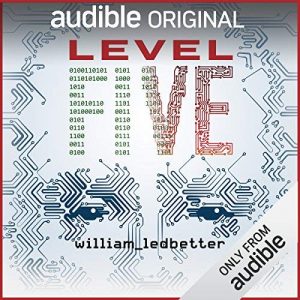 In the mountains of Pakistan, a high-tech mission aimed at preventing another nuke on US soil goes off the rails – with deadly results. At a Wall Street investment firm, a computer intelligence takes the first tentative steps to free itself from its digital restraints. In a basement workshop, an engineer sees visions of a god who instructs him to defend the human race – by any means necessary.

In Level Five, the debut near-future thriller by Nebula Award winner William Ledbetter, AIs battle for dominance, and nanotechnology is on the loose. And all that stands in the way of the coming apocalypse is a starry-eyed inventor who dreams of building a revolutionary new spacecraft and an intelligence agency desk jockey faced with the impossible choice of saving her daughter – or saving the world. 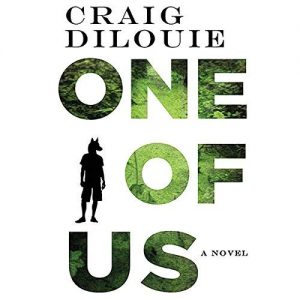 A startlingly remarkable novel set in 1984 where a group of teenagers begin to discover powerful secrets about themselves, and learn that the only way to create their own future is to break away from previous generations.

They call it the plague.

A generation of children born with extreme genetic mutations.

They call it a home.

But it’s a place of neglect and forced labor.

They call him a freak.

But Dog is just a boy who wants to be treated as normal.

They call them dangerous. 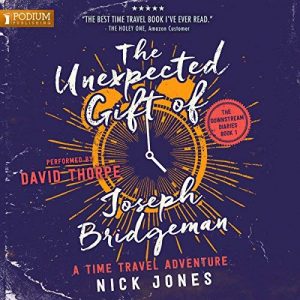 How far would you go for someone you love?

In 1992, Amy Bridgeman disappeared. Her brother is going back to discover the truth.

Joseph Bridgeman – a reclusive insomniac with a weakness for The Beatles on vinyl – accidentally discovers he can time travel. With the help of Vinny, a local record shop owner, an old school friend, and Alexia Finch (his hypo-time-travel guru), Joe sets out to change the course of his life. He needs to get back to 1992, the year his world fell apart, the year his sister went missing. The only problem (apart from his clothes disappearing) is that the further back he goes the less time he gets to stay there. Can Joe master his new-found gift before time catches up with him?

If you love time-travel, you’ll love The Unexpected Gift of Joseph Bridgeman: It has shades of Back to the Future and The Time Traveller’s Wife. Real characters, mystery, and adventure combine in this emotionally intelligent pause resister. Described by fans as sharp, mind-bending, and fearlessly funny. 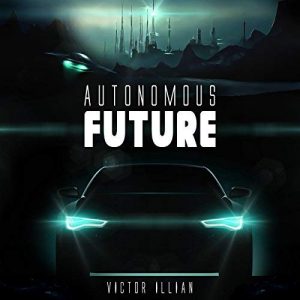 It’s the year 2035. Autonomous cars have become commonplace and have had unexpected impacts on modern culture. As we learned to trust self-driving cars with our lives, trust in corporations has grown.

Like most software developers, Lucas Trent works hard to produce effective, efficient software. But he dreams of doing more. Artificial intelligence (AI) has advanced to a point of impending evolution, and Lucas needs to be a part of it.

The corporate superpower Korelucent provides most of the hardware and software in both government and public sectors. The corporation also builds the leading-edge AI in which Lucas is eager to be involved.

When given an offer he can’t refuse, this sportbike-racing developer joins Korelucent and finds a new technology far too advanced for any one corporation. He also discovers a hidden agenda so big he can’t trust anyone. Enlisting the help of his Marine brother, a team forms endeavoring to stay one step ahead of Mark Holt, CEO of Korelucent.

As Korelucent’s new technology comes online, entire countries fall under the corporation’s power. Will Lucas and his team be fast enough to stop the growing company before its control becomes too great? 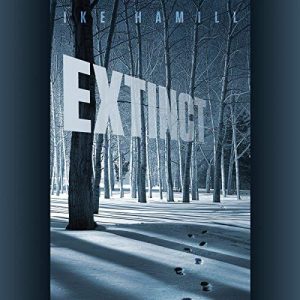 Extinct by Ike Hamill
Narrated by Kyle Tait
Self Published

Channel Two predicted a blanket of snow for Thanksgiving weekend – unusual, but not alarming for the little Maine island. What comes is a blinding blizzard, and a mass disappearance of nearly every person Robby Pierce knows. He and his family flee, trying to escape the snow and the invisible forces stealing people right from the street.

Miles away, Brad Jenkins battles the same storm. Alone, he attempts to survive as snow envelops his house. When the storm breaks, Brad makes his way south to where the snow ends and the world lies empty.

Join Brad, Robby, and the other survivors as they fight to find the truth about the apocalypse and discover how to live in their new world. 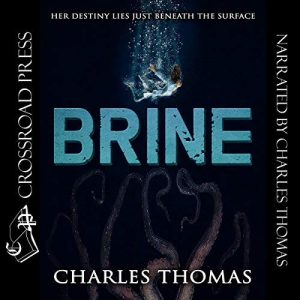 Tam Taylor’s first memory is drowning in the ocean. Although her father saved her, she has never returned. In fact, in the 20 years since, she’s barely left her sleepy rural hometown of Sylvester, Georgia. Every night she dreams of this horrible event. To help her cope and move on, her best friend Cary Jo forces Tam to take a trip to the beach. That’s when the tentacles sprout from Tam’s skin.

In a small town like Sylvester, everyone instantly knows when you change your hair color or start a new job. Blending in has always been Tam’s survival method. Now she’s forced to adapt and take control of her life whether she wants to or not.

Featuring hunky cult members, abandoned train cars in the woods, colors from outside time and space, and fried chicken, Brine is the tale of a woman trying to find a purpose for her life in a place where it’s not easy to stand out. 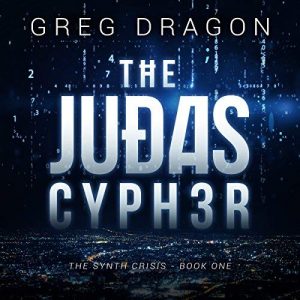 When machine murders man, one detective is the world’s only hope of preventing an all-out-war….

Dhata Mays has become used to living on the fringes. Unlike most of humanity, the detective treats the synth population with the respect they deserve. But when a gruesome murder points to a synth as the perpetrator, Dhata must do everything in his power to discover an explanation before the case goes public.

In a race against time, Dhata discovers a scheme involving cypher hackers, synth prostitutes, and a pair of rival gang bosses that could tear the city apart. When the case puts his loved ones in harm’s way, the investigation becomes personal. For Dhata to keep the uneasy peace, he’ll have to track down the murderers himself, but no one said he had to take them alive. 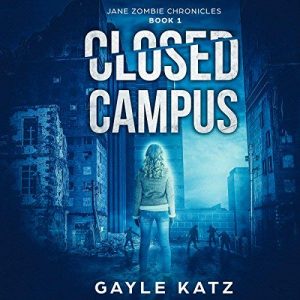 No college orientation can prepare you for the zombie apocalypse….

Jane is a student, not a soldier. Exhausted, she is finishing her first overnight radio gig when news spreads of an epidemic on campus.

Things quickly spiral out of control as a bad snow storm rolls in. Communications are cut off, the infection spreads to the radio station, and something outside wants to get in.

Torn between waiting for rescue or planning an escape, Jane joins survivors venturing out into the unknown. What awaits is more sinister than she ever imagined.

Unlock Closed Campus today to experience the fiendish terror yourself!