Welcome to Brian’s Book Blog’s weekly New and Notable Post for the Week of July 28th.  We share the 10 books from this week that caught our eye featuring Post-Apocalyptic, Horror, Sci-Fi, Thrillers, and more. Enjoy! 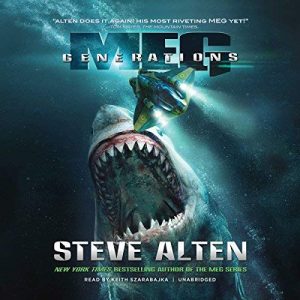 Book six in the best-selling Meg series picks up after Meg: Nightstalkers with David Taylor in the Salish sea, attempting to locate and rescue any surviving Megalodon pups before a local fisherman slaughters them. Meanwhile, Jonas is coerced into joining an expedition into the Panthalassa sea in search of a prehistoric predatory species possessing liver enzymes that can cure cancer. 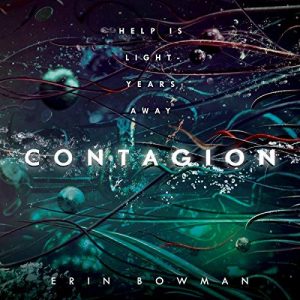 Perfect for fans of Madeleine Roux, Jonathan Maberry, and horror films like 28 Days Later and Resident Evil, this pulse-pounding, hair-raising, utterly terrifying novel is the first in a duology from the critically acclaimed author of the Taken trilogy.

After receiving a distress call from a drill team on a distant planet, a skeleton crew is sent into deep space to perform a standard search-and-rescue mission.

When they arrive, they find the planet littered with the remains of the project – including its members’ dead bodies. As they try to piece together what could have possibly decimated an entire project, they discover that some things are best left buried – and some monsters are only too ready to awaken. 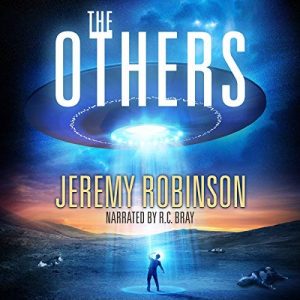 The Others by Jeremy Robinson
Narrated by R.C. Bray
Breakneck Media

To save a missing girl….

Dan Delgado is a private investigator. When it comes to finding cheating spouses, corporate thieves, or runaway teenagers, he’s unenthusiastic, and unmatched. As a former San Francisco detective, he misses more meaningful work, but he hasn’t had the heart for it since his wife’s death five years prior. That is, until a phone call from a distraught mother, an illegal immigrant who can’t go to the police, puts him on the hunt for a missing little girl.

By the time he reaches the mother’s small home, she’s missing, too. The circumstances are strange, but when a team of heavily armed mercenaries arrive, Delgado is convinced there is more going on than a simple kidnapping.

Joined by his wise-cracking elderly assistant, a gun-toting pastor, and a UFO enthusiast Uber driver, Delgado follows the clues west, to Colorado City, a town cleaved in two by the 37th parallel, also known as the UFO Highway. In a town infamous for fundamentalist Mormon cult activity, they uncover evidence of a massive child-trafficking ring whose ringleaders might not be human.

Delgado and crew are plunged into a dangerous world of corporate competition, UFO lore, and government cover-ups. While they hunt for answers, they’re pursued across the Southwest by high-tech mercs, brainwashed cults, and beings whose true identity has been concealed since 1947. 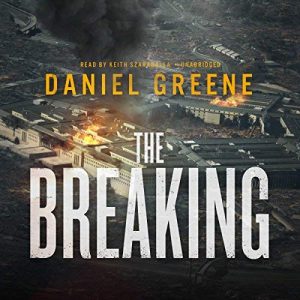 The hunt is on to find Patient Zero…

Both the East and the West Coasts of the United States have collapsed, and the US military is in full retreat. All their attempts to stem the tide of the dead have failed.

Former counter-terrorism agent Mark Steele and his fellow survivors have been bushwhacked in the West Virginia hills. The fringe West Virginians are teaching him a valuable lesson in the new rules of the apocalypse. The mountain folk are as resilient as they are ruthless, and Steele must find a way out to save his people.

In a desperate gamble to stop the virus, retired Air Force Colonel Michael Kinnick has been entrusted with finding Dr. Joseph Jackowski, who’s gone missing in West Virginia. Kinnick’s depleted unit of Special Forces soldiers have reached the breaking point as the dead assault them at every step.

Outside of Pittsburgh, Dr. Joseph Jackowski’s quest to find Patient Zero has stalled. Unwillingly conscripted into the National Guard, he has been enlisted into Colonel Jackson’s rapidly depleting force. As the military quarantine disintegrates around Pittsburgh, death marches closer, and time is running out.

In this thrilling sequel to End Time, Daniel Greene continues his fast-paced and gripping apocalyptic saga. The Breaking transports us to a near future composed of death, honor, destruction, and hope as the United States falls and lives crumble before a devastating zombie virus. 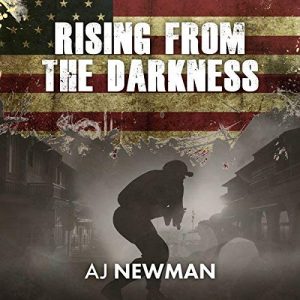 Rising From The Darkness by AJ Newman
Narrated by Kevin Pierce

Joe and his band of intrepid survivors have joined a larger group of survivalists. They are making life much better by implementing mutual-assistance groups that help protect each other and barter among themselves.

While life is getting better, there are still threats to handle and pains to endure. The loss of a several loved members rocks the group and shakes its faith. Joe and Cobie make sure the group uses the pain to make the group stronger as they fight to rid Oregon and Northern California of gangs and slavers.

Life is tough in the apocalypse, but this band is a tough bunch of survivors.

Decades ago, a mysterious treasure vanished in the middle of the night. But the secrets it held were worth more than gold.

The thrilling follow-up to The Secret of the Stones sends former government agent Sean Wyatt and his sidekick Tommy Schultz from the deserts of the American southwest to the hills and jungles of Ecuador in a perilous race to find the mysterious lost treasure.

The treasure is somehow linked to the legendary Lost Chambers of Gold that has remained hidden for thousands of years. But the chambers hold a deeper secret, one on which an evil mastermind has his sights set.

Along the way, Sean and Tommy find ancient clues that lead the way to the next of the lost chambers, and with a little help from the beautiful Adriana Villa, they may be the first to reach it. 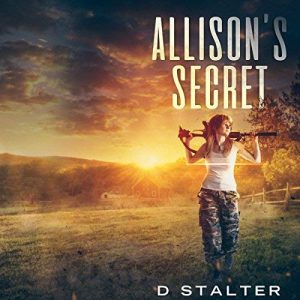 Allison has a secret. Like any farm wife, she is prepared for bad storms, bad times, and bad luck. But even her husband is unaware she is more prepared than the average farm wife. (But don’t ever call Allison a prepper!)

Riley and Will are motorcycle buddies on a mission to rescue Riley’s nephew, who’s been kidnapped by his father. When a solar flare throws them all together, there’s going to be problems. 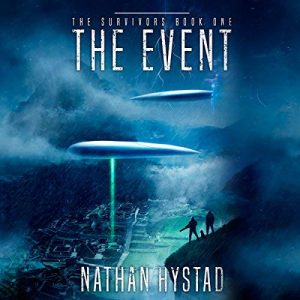 Cities all around the world reported strange alien vessels descending. Some saw them as the heralds of a new age; others fired everything they had at them. All were taken as the beams lashed down and drew them into the sky.

Dean was left behind, seemingly the last man on Earth. A trail of clues left by his dead wife guides Dean on a perilous journey across America and beyond to learn the truth behind the mysterious ships and save humanity from its doom.

But not everything is as it seems.

The Event is the epic first novel by Nathan Hystad, creator of the best-selling Explorations anthology series. 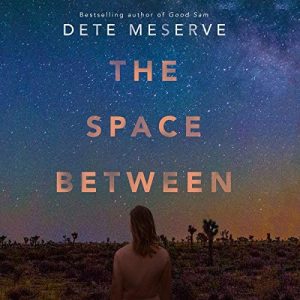 The truth isn’t what it seems in this stirring novel of suspense.

After presenting a major scientific breakthrough to a rapt audience across the country, renowned astronomer Sarah Mayfield returns home to a disturbing discovery. Her husband, Ben, a Los Angeles restaurateur, has disappeared, leaving behind an unexplained bank deposit of a million dollars, a loaded Glock in the nightstand, and a video security system that’s been wiped clean. The only answers their son, Zack, can offer are the last words his father said to him: keep the doors locked and set the alarm.

Sarah’s marriage was more troubled than anyone suspected, but now she is afraid that her husband’s recent past could be darker than she dares to admit. Suspecting that nothing about Ben’s vanishing is what it seems, Sarah must delve into the space between old memories, newfound fears, and misleading clues to piece together the mystery of her husband’s disappearance – and find what she hopes in her heart is the truth. 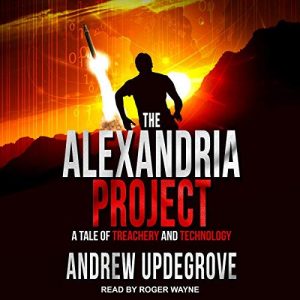 Cybersecurity super-sleuth Frank Adversego finds himself trapped in a power play between the FBI and the CIA as hackers try to destroy the USA. Only by defeating the Alexandria Project can he clear himself. 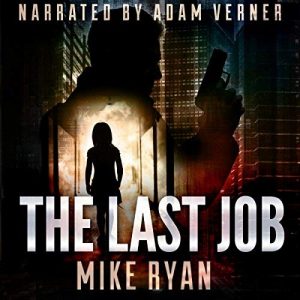 The Last Job by Mike Ryan
Narrated by Adam Verner

Eric Lamb is a world-renowned hit-man. He’s the best there is. He’s the number one go-to man when a job pops up. But Lamb is getting tired of his profession. The constant killings, some seemingly innocent, have finally taken their toll on him. And he’s about to do something about it. After he’s contracted to do a new job, he decides he’s had enough. All in the hopes of saving a young girl he doesn’t even know. And it will probably cost him his life. 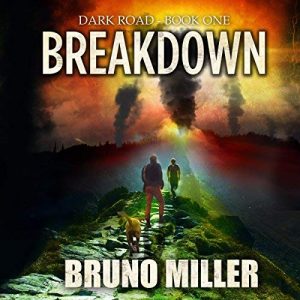 Do you have what it takes to survive?

Ben Davis was prepared for disaster. He just didn’t know it would come so soon. He and his teenage son, Joel, are miles deep in the backcountry of the San Juan Mountains when high-altitude nuclear electromagnetic detonations light up the pre-dawn sky. Ben, Joel, and their dog, Gunner, must make their way home – or to whatever’s left of it – on foot.

Without the ability to communicate with his ex-wife in Maryland, Ben has no idea if Joel’s brother and sister are okay. The two decide they have no options but to head East. Before their journey begins, they venture into town to check Ben’s outdoor store for supplies and discover one of Joel’s classmates, Allie, alone and in desperate need of help.

When Ben realizes Allie’s flight attendant mother is most likely dead and her father lives in Pittsburgh, he knows he has to take her with them. Ben must use the skills he learned as an Army Ranger many years ago to survive the post-apocalyptic world they now live in. Can he keep himself and two teenagers safe as they navigate the dark and dangerous road ahead?