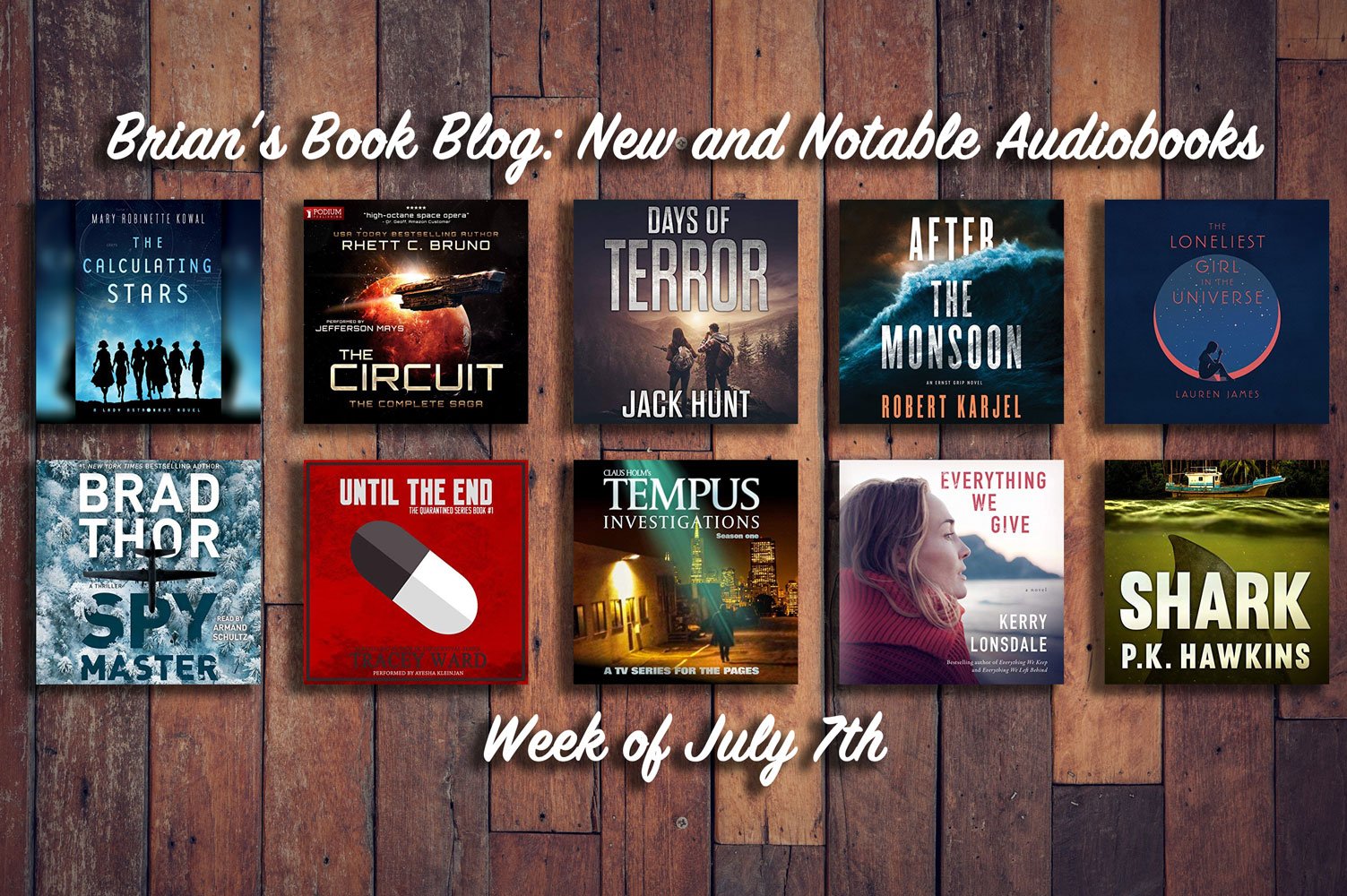 Welcome to Brian’s Book Blog’s weekly New and Notable Post for the Week of July 7th.  We share the 10 books from this week that caught our eye featuring Post-Apocalyptic, Horror, Sci-Fi, Thrillers, and more. Enjoy! 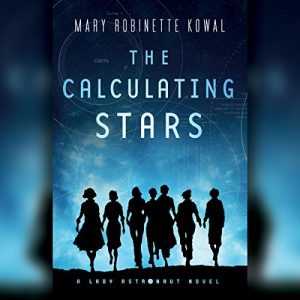 On a cold spring night in 1952, a huge meteorite fell to earth and obliterated much of the East Coast of the US, including Washington, DC. The ensuing climate cataclysm will soon render the Earth inhospitable for humanity, as the last such meteorite did for the dinosaurs.

This looming threat calls for a radically accelerated effort to colonize space and requires a much-larger share of humanity to take part in the process.

Elma York’s experience as a WASP pilot and mathematician earns her a place in the International Aerospace Coalition’s attempts to put man on the moon, as a calculator. But with so many skilled and experienced women pilots and scientists involved with the program, it doesn’t take long before Elma begins to wonder why they can’t go into space, too.

Elma’s drive to become the first lady astronaut is so strong that even the most dearly held conventions of society may not stand a chance against her.

Earth is a dying planet. To survive, humanity founds the Circuit, a string of colonies across the solar system, dedicated to mining resources vital to preserving what remains of mankind. Here there are no heroes or villains, only those willing to do what’s necessary to survive.

The New Earth Tribunal, a powerful religious faction, has risen to rule the Circuit. They believe a Spirit within the Earth will one day appear and welcome humanity back home. Following a string of seemingly random attacks, the Tribunal suspects its mortal enemy, the Ceresians, have again rallied to challenge their absolute rule. But a new, sinister threat has arisen – and it plans to bring down the Tribunal once and for all.

Join an unlikely band of would-be saviors – the Tribunal’s best spy, a roguish Ceresian mercenary, a subservient android, and a disgraced general – as they are drawn into a conspiracy destined to change the Circuit forever. 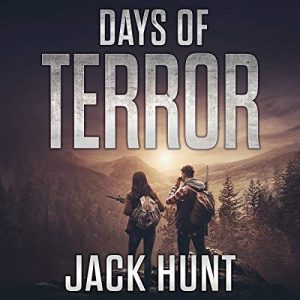 The nation is in turmoil, resources are rare, and the desperate are terrifying.

After two dangerous weeks on the road, Elliot and his family arrive at the compound in Texas. But with a war on the horizon, and threats at every turn, they soon discover their journey may have been in vain. Caught between a rock and a hard place, the decision to fight may no longer be an option.

Meanwhile, trouble is brewing at the FEMA camp, and Gary is in for a shocking surprise. Can Elliot and Rayna trust a dishonest group of strangers to save those they love? And will the Hayes brothers finally bring Frank Shelby to his knees?

Days of Terror is book four of an EMP, post-apocalyptic survival thriller series. It’s a powerful, action-packed story about the ones we leave behind and the risks we must take to survive. 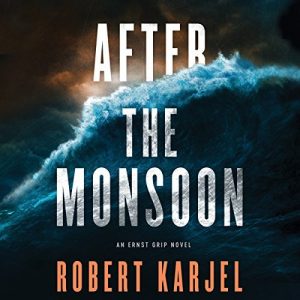 After The Monsoon by Robert Karjel
Narrated by David Colacci
HaperAudio

From the author of the international best seller The Swede comes an electrifying thriller set in the terrorist- and pirate-infested world of the Horn of Africa – where the sea caresses the desert, alliances shift like sand, and a Swedish detective can count on nothing but his own shrewdness to survive.

A Swedish army lieutenant drops dead on a shooting range in the desert. Was it an unfortunate accident – or something more nefarious? Ernst Grip, an agent of the Swedish security police, is sent to the Horn of Africa to find out. Once he’s on the ground, however, he quickly discovers he’s on his own. No one wants him snooping around – especially not the US Embassy’s CIA station. Which is no surprise, given that military transport planes are leaving from the base carrying untraceable pallets loaded with cash.

What’s more, Grip’s investigation is complicated by another dangerous situation. Somali pirates have kidnapped a wealthy Swedish family during the adventure of a lifetime: a sailing trip from Sweden to the Great Barrier Reef. Why, Grip wonders, is no one back home willing to pay the ransom in order to save these innocent lives?

Solving the mystery of the soldier’s death isn’t the end of Grip’s involvement – it’s a tipping point that leads him deep into a web of intrigue, greed, and dark dealings ensnaring both allies and enemies…and a world where no one can be trusted.

After the Monsoon explores the tough compromises made every day in pursuit of the greater good. How do you know which is the lesser of two evils? And what is the cost of betraying one interest to save another? In this provocative, pulse-pounding, and sophisticated thriller, Robert Karjel vividly creates a world in which the stains of innocent blood cannot be cleansed, and the sins of good men forced to make impossible choices cannot be washed away.

A surprising and gripping sci-fi thriller with a killer twist

The daughter of two astronauts, Romy Silvers is no stranger to life in space. But she never knew how isolating the universe could be until her parents’ tragic deaths left her alone on the Infinity, a spaceship speeding away from Earth.

Romy tries to make the best of her lonely situation, but with only brief messages from her therapist on Earth to keep her company, she can’t help but feel like something is missing. It seems like a dream come true when NASA alerts her that another ship, the Eternity, will be joining the Infinity.

Romy begins exchanging messages with J, the captain of the Eternity, and their friendship breathes new life into her world. But as the Eternity gets closer, Romy learns there’s more to J’s mission than she could have imagined. And suddenly, there are worse things than being alone… 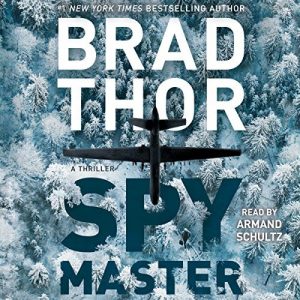 Across Europe, a secret organization has begun attacking diplomats. Back in the United States, a foreign ally demands the identity of a highly placed covert asset. In the balance hang the ingredients for all-out war.

With his mentor out of the game, counterterrorism operative Scot Harvath must take on the role he has spent his career avoiding. But, as with everything else he does, he intends to rewrite the rules – all of them.

In Spymaster, Scot Harvath is more cunning, more dangerous, and deadlier than ever before.

If you have never listened to a Brad Thor novel, this is the place to start! 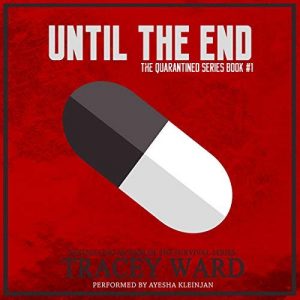 An outbreak of “The Fever” has taken hold of Portland, Oregon, bringing the population to its knees. “The Fever” spreads and kills quickly, but the dead aren’t staying dead.

When her neighbor, Jordan, saves her from an infected, Alissa joins him in his plan to escape the city, the zombies and the threat of a quarantine that will lock the living in with the undead.

What she doesn’t tell him is that she has an illness of her own, one that plays tricks with her mind and makes her a dangerous companion. But Jordan has a secret as well, one that compels him to keep Alissa, a veritable stranger, safe at all costs.

As they fight for their lives and race for their freedom, they’ll discover that what they truly need in order to survive is to stay together until the end.

*Due to language and violence, this book is not recommended for listeners under the age of 16. 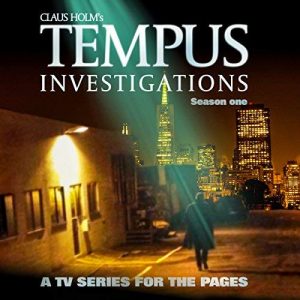 Through the first season, Jim and his friends match wits with the supernatural side of San Francisco, making both new friends – and a few enemies.

Tempus Investigations mixes the world of TV and books, making a unique kind of story – a fan fiction so elaborate it needed to create the show itself. In this audiobook, you’ll find the first four episodes, which form season one.

If you love shows like Buffy, Angel, and Supernatural – tune in for Tempus Investigations! 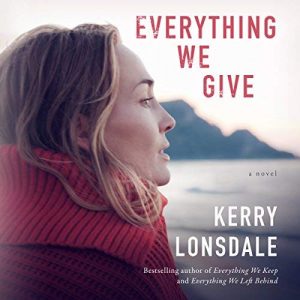 From the author of Everything We Keep comes the final novel in the Amazon Charts and Wall Street Journal bestselling Everything Series. Brimming with suspense, mystery, and romance, Everything We Give brings to a powerful close the gripping series of love, lies, and the secrets families keep.

Award-winning photographer Ian Collins made only one mistake in life, but it cost his mother her freedom and destroyed their family, leaving Ian to practically raise himself. For years he’s been estranged from his father, and his mother has lived off the grid. For just as long, he has searched for her.

Now, Ian seemingly has it all – national recognition for his photographs; his loving wife, Aimee; and their adoring daughter, Caty. Only two things elude him: a feature in National Geographic and finding his mother. When the prized magazine offers him his dream project on the same day that Aimee’s ex-fiancé, James, returns bearing a message for Ian but putting a strain on his marriage, Ian must make a choice: chase after a coveted assignment or reconnect with a mysterious woman who might hold the key to putting his past to rest. But the stakes are high, because Ian could lose the one thing he holds most dear: his family. 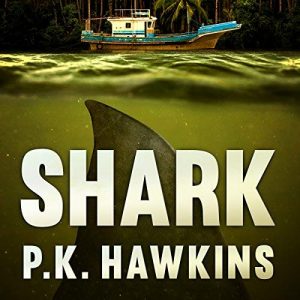 For Simon, the trip was supposed to be a once-in-a-lifetime gift: a journey to the Amazon River Basin, the land that he had dreamed about visiting since he was a child. His enthusiasm for the trip may be tempered by the poor conditions of the boat and their captain leading the tour, but most of the tourists think they can look the other way on it.

Except things go wrong quickly. After a horrific accident, Simon and the other tourists find themselves trapped on a tiny island in the middle of the river. It’s the rainy season, and the river is rising. The island is surrounded by hungry bull sharks that won’t let them swim away. And worst of all, the sharks might not be the only blood-thirsty killers among them.

It was supposed to be the trip of a lifetime. Instead, they’ll be lucky if they make it out with their lives at all.