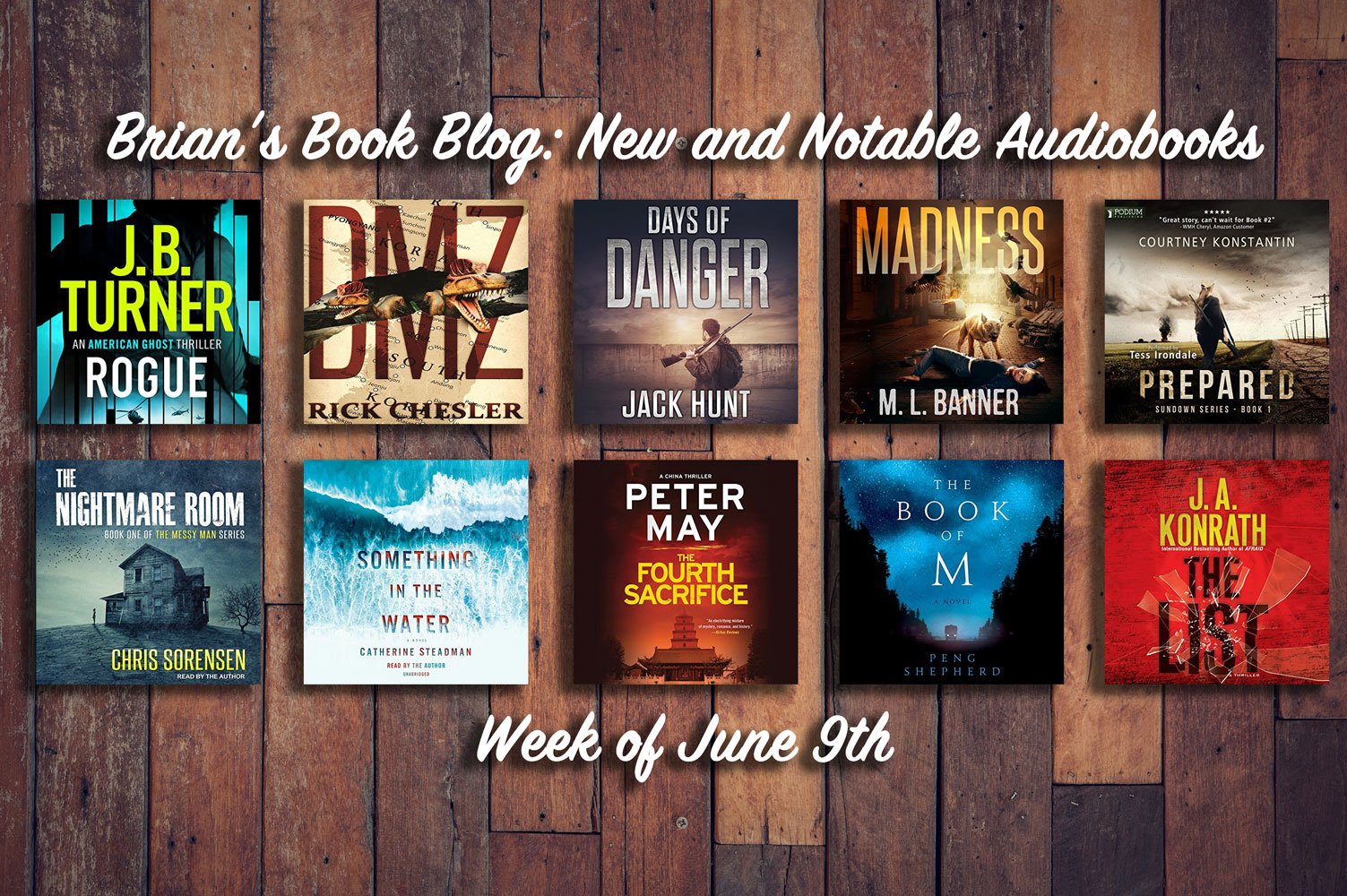 Welcome to Brian’s Book Blog’s weekly New and Notable Post for the Week of June 9th.  We share the 10 books from this week that caught our eye featuring mostly Post-Apocalyptic, Science Fiction, and Thrillers with a few others thrown in. Enjoy! A deep-state US organization has a top-secret kill list – and a popular senator is on it.

Nathan Stone was killed in action while serving as a covert CIA operative. Or so everyone thought. In reality he’s become a ghost, a black-ops asset with a new identity and controlled by a secret government organization. The Commission has one aim: to hunt down and assassinate anti-establishment enemies of the state.

Its number-one target is Senator Brad Crichton, an ambitious politician with growing support. Stone is ready to take him out, but his plan is soon compromised when the Commission’s kill list is leaked to a journalist – whose own name is on the list too. And when the journalist tries to alert the senator, he is found dead in suspicious circumstances. Stone is closing in on Crichton, but must act swiftly to reach him before the truth does.

He knows that one wrong foot will put him in the firing line. But where national security is at stake, the hunter can quickly become the hunted. An impulsive decision at the world’s most dangerous border. A thriving wilderness sheltering a prehistoric secret.

Six friends on a tourist trip to the Korean DMZ have their lives changed forever when they decide to step into a no-man’s-land. But they soon discover that a border is not the only line they’ve crossed. A revealed secret between them causes bad blood to spill over, preventing the friends from cooperating.

With the specter of capture by a totalitarian regime awaiting them should they stray too far off course, and with a pack of primordial predators roaming the woods, the wayward travelers must find a way to set aside their differences if they are to avoid becoming either political prisoners…or prey. Months after the EMP, would you still be alive?

Six months after the EMP, and the collapse of the United States, no one is safe. In Lake Placid, Elliot and his family have survived the winter, but lost their home and are still struggling to stay alive through days of danger. But when Maggie learns about a compound in East Texas offering hope and safety, and Gary drops a bombshell that could divide the group, tempers flare, and a decision must be made. Who will stay and who will leave?

In a dangerous new world where survival isn’t guaranteed, Elliot, Rayna, Gary, and the others must face off against the most desperate, ruthless, and brutal of society – where there is no telling who will survive. Madness by M.L. Banner
Narrated by Gary Tiedemann
Self Published

Over half of all the world’s mammals are already infected, but aren’t symptomatic because the parasite remains dormant in most hosts. Like a ticking bomb, this puppet master is patiently waiting for the right time to set off its hosts against the world.

That time is now!

A canceled flight due to a volcanic eruption and a violent animal attack at their port almost cause Ted and TJ to miss their transatlantic cruise and a needed escape from their busy lives in the US.

But there will be no peace or tranquility on this cruise as something is very wrong: animals have started to attack for no apparent reason.

It will take Ted and TJ’s unique skills to not only survive their cruise, but to understand an apocalypse of madness which appears to have struck the whole world. She thought she was prepared for the end of the world…until it actually came.

Alex Duncan is a mother, a sister – and the daughter of a doomsday prepper. She always thought her father was insane, raving about an apocalypse she never believed in, but when a plague hits the United States and the dead no longer stay dead, Alex discovers heeding her deceased father’s advice is what will keep her family alive. Before he died, Alex’s father created a compound in Montana just in case situations like this arose.

Hell has arrived on Earth.

The dead walk, hungry for human flesh. Living in a highly populated city like Las Vegas makes the reality of the plague imminent to Alex. With little time to spare, Alex must make split-second decisions to prevent her family from being devoured. Facing the end, Alex has three goals: Escape Las Vegas. Get to the compound. Survive.

As the outside world crumbles and grows darker, Alex faces adversity from not just the infected, but the uninfected as well. Government assistance is nowhere in sight, and rumors fly that the nation’s only solution to the growing plague is execution.

Not everyone will outlast the plague. Doomsday is here. Will Alex be up to the challenge, or fall, and rise again as one of the undead? The White House is the home of the president of the United States, the most guarded, monitored, closely watched person in the world. So how could a US president vanish without a trace? And why would he choose to do so?

An unprecedented collaboration between President Bill Clinton and the world’s best-selling novelist, James Patterson, The President Is Missing is a breathtaking story from the pinnacle of power. Full of what it truly feels like to be the person in the Oval Office – the mind-boggling pressure, the heartbreaking decisions, the exhilarating opportunities, the soul-wrenching power – this is the thriller of the decade, confronting the darkest threats that face the world today, with the highest stakes conceivable. A shocking discovery on a honeymoon in paradise changes the lives of a picture-perfect couple in this taut psychological thriller debut – for listeners of Ruth Ware, Paula Hawkins, and Shari Lapena.

If you could make one simple choice that would change your life forever, would you?

Erin is a documentary filmmaker on the brink of a professional breakthrough, Mark a handsome investment banker with big plans. Passionately in love, they embark on a dream honeymoon to the tropical island of Bora Bora, where they enjoy the sun, the sand, and each other. Then, while scuba diving in the crystal blue sea, they find something in the water….

Could the life of your dreams be the stuff of nightmares?

Suddenly the newlyweds must make a dangerous choice: to speak out or to protect their secret. After all, if no one else knows, who would be hurt? Their decision will trigger a devastating chain of events….

Have you ever wondered how long it takes to dig a grave?

Wonder no longer. Catherine Steadman’s enthralling voice shines throughout this spellbinding debut novel. With piercing insight and fascinating twists, Something in the Water challenges the reader to confront the hopes we desperately cling to, the ideals we’re tempted to abandon, and the perfect lies we tell ourselves. The Chinese police have once more been forced to enlist the services of American forensic pathologist Margaret Campbell, this time to investigate a series of four horrific ritual executions in Beijing.

Detective Li Yan is determined to discover just how one of the victims in particular, an American diplomat, became caught up in the slaying. And he is arguably even more determined to have nothing to do with Campbell, whom he finds simultaneously too foreign and too… familiar.

The personal polarity that once attracted Yan and Campbell again strengthens their professional partnership. Yet the closer they draw to the truth, the greater the danger posed by a killer prepared to do anything to conceal it. Set in a dangerous near-future world, The Book of M tells the captivating story of a group of ordinary people caught in an extraordinary catastrophe who risk everything to save the ones they love. It is a sweeping debut that illuminates the power that memories have not only on the heart, but on the world itself.

One afternoon at an outdoor market in India, a man’s shadow disappears – an occurrence science cannot explain. He is only the first. The phenomenon spreads like a plague, and while those afflicted gain a strange new power, it comes at a horrible price: the loss of all their memories.

Ory and his wife, Max, have escaped the Forgetting so far by hiding in an abandoned hotel deep in the woods. Their new life feels almost normal, until one day, Max’s shadow disappears, too.

Knowing that the more she forgets, the more dangerous she will become to Ory, Max runs away. But Ory refuses to give up the time they have left together. Desperate to find Max before her memory disappears completely, he follows her trail across a perilous, unrecognizable world, braving the threat of roaming bandits, the call to a new war being waged on the ruins of the capital, and the rise of a sinister cult that worships the shadowless.

As they journey, each searches for answers: for Ory, about love, about survival, about hope; and for Max, about a new force growing in the south that may hold the cure.

Like The Passage and Station Eleven, this haunting, thought-provoking, and beautiful novel explores fundamental questions of memory, connection, and what it means to be human in a world turned upside down. They are ten strangers with one thing in common:
A mysterious tattoo on the bottom of their feet.

None of them know how it got there or what it means.
One of them is a homicide cop who’s determined to find out.
All of them are marked for death – because they’re next on…

The explosive thriller from bestselling author J.A. Konrath, The List takes you deep inside a top-secret techno-conspiracy that’s too shocking to comprehend, too insidious to detect, and far too powerful to stop… 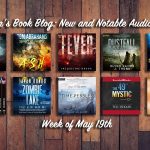 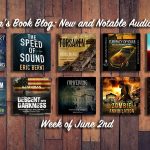 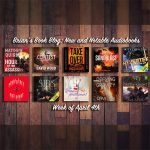 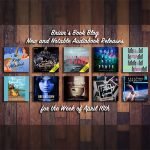