The King Tides by James Swain (Narrated by Patrick Lawlor) 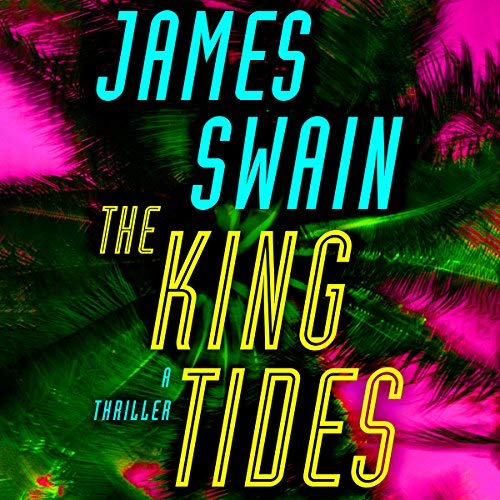 Yes, I just went there. 4.44 out of 5.  I did this because without some of the issues I’ll call out this should have been a 5, but they were bothersome enough that I can’t rate it a 4.5 (which I would round up to a 5).  Warning: the issues I call out wouldn’t bother everyone but seemed to bug me.

I can’t really describe the premise of the book better than what is already done, so I’ll just post it here: Nicki Pearl is the perfect daughter – every parent’s dream. And that of strangers, too. Wherever she goes, she’s being watched. Each stalker is different from the last, except for one thing – their alarming obsession with Nicki.

So, there are all these men and they are seemingly obsessed with Nicki – a 15-year-old girl. A private investigator is called and we are introduced to Jon Lancaster.  A pot-bellied (medical condition) unassuming former cop who is now a private investigator.  Did I mention that he’s also an ex-Navy SEAL? Yeah, he’s that too.

The King Tides is a book that I won’t soon forget.  Excellent character development and a story that will definitely stick in your mind.  It was an intense ride from beginning to end. Lancaster is a likable good guy who always seems to find the right thing to do or say.  He’s able to save the day even when you don’t have much hope.  We’re even given a “mini” case to start The King Tides off so that we can really get to know him.

Much later in the book, we are introduced to an FBI agent with a vendetta she needs help completing.  I would talk much more about her and how she was introduced – but it will pretty much ruin a big turning point in King Tides.

Now, on to some of the stuff that I was bothered by.  I think Swain wrote this book for the airport Thriller readers. Those are the 40-60ish-year-old men and women who read Thrillers while on trips. I say this because he explained things that I did not feel like needed to be explained. For example, there was a scene where he needs to get a replacement phone (skipping some major spoilers here).  Swain basically explained the entire process from walking into Verizon, talking to the clerk, buying the new phone, having her transfer data over, etc.  It just felt… bloated and unnecessary. But, it got worse once he got home and was looking at the phone.  He started going through the apps and literally explaining what they all did – all the way down to the calculator app. Yes, he explained what the calculator app did.  Here is how the scene went down (slight paraphrase to not spoil anything):

Unfortunately, a lot of the book was little scenes like this where he would over-explain things that I think are either common knowledge or at the very least easily Google-able. It made the book feel a bit choppy for me. Every time the action would pick up or a major scene would happy – I’d get an extra explanation I didn’t need.

Another qualm that I had with it was that some of the things just seemed too simplified.  There were numerous scenes where Lancaster would say things like “As a private investigator he doesn’t have to abide by the same rules of law enforcement officers” and he seems to use this to the nth degree.  There were parts of King Tides that I thought… yeah that couldn’t happen. Or, yeah, the cops would definitely be called.  I’m pretty good at suspending my disbelief but I had a hard time with some of the off-the-wall stunts that Lancaster pulled.

Now, with all of that said – I enjoyed the heck out of The King Tides. It was a blast of a book that I won’t soon forget.  A premise that isn’t usually touched upon. Killers that stand out.  And a duo that is completely unexpected.

Nicki Pearl is the perfect daughter - every parent’s dream. And that of strangers, too. Wherever she goes, she’s being watched. Each stalker is different from the last, except for one thing - their alarming obsession with Nicki.

Desperate times call for desperate measures, and Nicki’s father is turning to someone who can protect her: retired private detective and ex-Navy SEAL Jon Lancaster. Teaming up with FBI agent and former abduction victim Beth Daniels, Lancaster can help - his way. He’s spent most of his career dispatching creeps who get off on terrorizing the vulnerable. Unlicensed, and unrestricted, he plays dirty.... But this case is unusual. Why so many men? Why this one girl? Does Nicki have something to hide? Or do her parents?