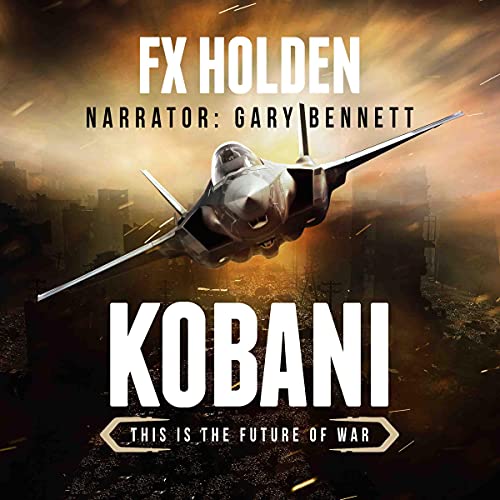 Relentless In The Best Way

Kobani was a title that I saw and promoted in one of my weekly new and notable audiobooks posts. To be honest, I pointed it out more because of Bennett’s narration than knowing the author. I’d never heard of FX Holden until this book and ironically, I saw a synopsis or a post that said something like “if this is your introduction to Holden you’d better buckle up”. So, I knew I was in for a ride. I didn’t know just how much of a ride it would be.

Right away Kobani throws you into the action. I was shocked at just how fast things moved and I thought “wow, this pace can’t possibly continue”. Spoiler alert, it did. Holden was able to keep me at the edge of my seat for the entire twelve hours – only slowing down to give a bit of backstory or maybe to make sure that I didn’t pass out or fall out of my seat.

I love near-future thrillers but I don’t always read a ton of them that deal with “the future of war”. I knew going into this I was going to get that since it says it on the cover, but it was really well thought out and everything that came up or happened felt super realistic. Each piece of technology or way that tech helped the soldiers felt like it was well-researched and like it was a natural way that things could go. I think that surprised me more than anything else. Not knowing anything about Holden I didn’t know what to expect. But I didn’t expect it to have me thinking “oh yeah, that sounds right” or “that makes sense” to all of the near-future stuff. That’s hard to pull off, even for hardcore science fiction writers.

This isn’t my first or even my 10th book narrated by Gary Bennett that I’ve enjoyed (it’s actually my 22nd or 23rd which is crazy). There’s a reason I keep going back to his narrations… they’re easy to listen to. Jump off of the page. And he’s able to bring life to each and every one of them. I honestly think this might be my first “pure” thriller – but he knocks it out of the park. His pacing and ability to turn tense situations into what feels like nail-biting moments astonishes and amazes me.

Overall, I thought Kobani was an excellent near-future military thriller. It kept me interested throughout and the pacing was relentless.

Kobani is an “action-packed thrill ride”, exploring what impact new military technologies will have on the men and women who serve. From the author of the Future War series, best-selling winner of Readers’ Favorite 2020 Political Thriller of the year, and a Publishers’ Weekly Star.

Backed by Russian airpower, Syria has begun an operation to push Turkish troops out of Northern Syria. Despite US efforts not to get dragged into the conflict, the US 1st Battalion, 3rd Marines “Lava Dogs”, find their hilltop combat outpost encircled and their Kurdish allies under siege. Further west, a Syrian armored advance across the border into Turkey pivots, threatening US troops at the Turkish and NATO airbase of Incirlik. But will Syria be satisfied with reclaiming its northern border region, or is the operation just the first move in a bolder plan to regain lost territories?

Inside Kobani, Kurdish Women’s Protection Unit sniper, Daryan Al-Kobani, is fighting for her people, her city, and her mother and sister, hunting a Russian sniper who shoots to grievously wound his victims, not to kill.

At Incirlik Air Base, laser air defense Tactical Control Assistant, Sergeant Alessa Barruzzi, struggles to keep her battery operational against an enemy who attacks with both cyber, electronic, and unconventional weapons.

Coalition allies, pilots Karen “Bunny” O’Hare and “Meany” Papastopolous, find themselves fighting for survival in the air over Turkey when Russia decides to unleash its newest stealth fighter on the battlefield, the Su-57 “Felon”, and change the rules of engagement.

And in Istanbul, cyber-warfare analysts Shimi Kahane of Israel’s Unit 8200, and Carl Williams, of the US NSA, put together the pieces of an intelligence puzzle codenamed “Operation Butterfly” that could signal Russia is planning the biggest test of US strategic resolve since the Cuban Missile Crisis.