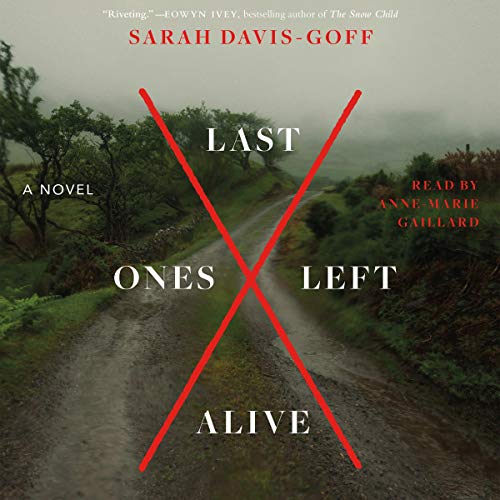 A Unique Perspective on the Apocalypse

I started and stopped this book a few times.  The first time that I listened to it I had just finished up a pretty intense book and this one was just too literary for me.  Once I got into a better mindset the book has a super interesting vibe to it. I’ll do my best to explain why I say that.

So, in the synopsis it mentions a review that says it’s a combination of The Road and 28 Days Later. I definitely get the 28 Days Later vibe. That was one of the reasons I had to stop.  I kept picturing those scenes instead of the ones that Davis-Goff was trying to write. I think part of it was the accent.  I know that Ireland and England have different accents – but it’s still similar enough that it really threw me.  Thankfully 28 Days Later is one of my favorite movies – so this book reminding me of that wasn’t an issue.

I’m unsure if Davis-Goff was trying to purposefully throw the reader off without explaining which time we were in but she jumped around a lot – every new chapter was either in the past when the main character was young – or in the present when things have taken a turn.  But if you weren’t paying attention it was easy to get confused.

The overall vibe of the book was interesting though.  It was, in my opinion, a take on the apocalypse that I don’t normally read about. Especially once we figure out who the “Banshee’s” are.  I thought the book as a whole (almost all female characters, all of them warned about men) had that “different” vibe that I like in some unique Post-Apocalyptic books.

I also would have liked to have known more about what happened to the skrake’s to make them into what they were. It just wasn’t talked about and I couldn’t tell what would have caused it. Though I prefer not talking about it to improperly describing it.

Overall, Last Ones Left Alive is a unique female-only perspective on the apocalypse.  It was a book that I had a little trouble getting into, but once I was into it – I enjoyed it.

"Combines the spare poetry of The Road with the dizzying pace of 28 Days Later." (Jennie Melamed, author Gather the Daughters)

"Davis-Goff writes language evocative of melancholy longing in a landscape both beautiful and brutal, and she's created the distinctive voice of a first-person narrator who is both confident in her abilities and filled with fear and grief...successfully blends horror, lyrical prose, and feminist themes." (Kirkus)

Remember your just-in-cases. Beware tall buildings. Always have your knives.

Raised in isolation by her mother and Maeve on a small island off the coast of a post-apocalyptic Ireland, Orpen’s life has revolved around training to fight a threat she’s never seen. More and more she feels the call of the mainland, and the prospect of finding other survivors.

But that is where danger lies, too, in the form of the flesh-eating menace known as the skrake.

Then disaster strikes. Alone, pushing an unconscious Maeve in a wheelbarrow, Orpen decides her last hope is abandoning the safety of the island and journeying across the country to reach the legendary banshees, the rumored all-female fighting force that battles the skrake.

But the skrake are not the only threat....

Sarah Davis-Goff's Last Ones Left Alive is a brilliantly original imagining of a young woman's journey to discover her true identity.