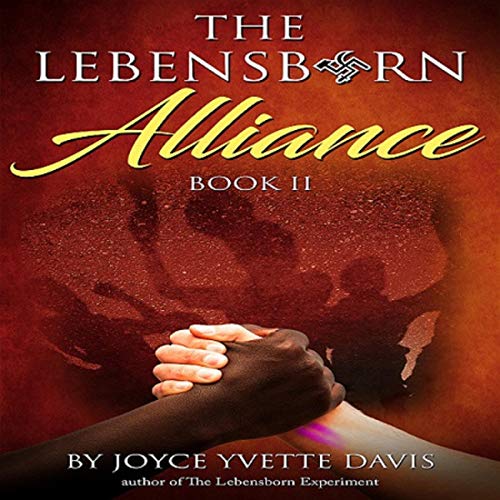 I did not read the first book in this series – I jumped right into Lebensborn Alliance. I had to go read some other reviews of the first book to figure out what was going on in this one, but it didn’t take away from it as much as I expect it to. Davis was able to write a story that jumped off of the page and really felt almost like time traveling. I felt like I was back in the era that this book took place.

The topics covered and the historical elements (fictional and not) were really well done. I thought that Davis did a great job putting the reading in the moments and allowing them to feel the stress and pressure of each thing.

The coolest part was watching the number of people with the serum in their blood grow and the things that this caused (trying not to spoil the book too much here). It really made for an element I wasn’t expecting. And took this book from okay to good.

Overall, a good historical fiction book that will definitely surprise a lot of readers. The writing in it is excellent and the scene setting was top notch.

It’s hard to write negatively about anything that you know anyone put time and effort into. I also know that it will make some people like it more and some people not. Unfortunately, I’m in the ‘not’ camp here. The narration by Othello Lofton was good, I had no issues with the actual narration, cadence, etc. What bugged me was the random sound effects. It wasn’t a full audio drama by any means, but it just felt like when he could find a sound for something he added it in. This, when done well, and right, really adds to the story. But when just randomly added like it was here, it sort of took away from the story. Now, as I said, that’s my opinion and others might actually love it. But I wanted to write about it to warn anyone.

In book I, during WWII, Sergeant Kapp Johnson of the 761st Tank Battalion was held prisoner by Nazi Colonel Victor Strauss in a medieval castle. Instead of a psychedelic drug meant to kill the sergeant, Johnson was injected with the Elixir of Life serum invented by Dr. Josef Weiss by mistake. Besides endless life, the serum enhanced Kapp’s physical abilities, giving him superhuman powers. Dr. Weiss also injected his nephew, Hans, and a 10-year-old Polish boy, Adok, with the serum, boosting their natural abilities. Hans and Kapp were together in the castle tower when Kapp, believed to be dead, fell from the tower window. After the war, and the death of Dr. Weiss, Hans and Adok moved to Canada. The two become like brothers.

It is now 1956, and the dawn of the Civil Rights Movement. Former Sergeant Kapp Johnson gets enlisted as Dr. Martin Luther King’s bodyguard and moves to Montgomery, Alabama. Hans has inherited millions from his uncle and buys the Vancouver Daily Times. As Managing Editor, Hans sends Adok to Montgomery to report on the bus boycott. When Adok gets involved with the local KKK and goes missing, Hans’ prophecy he would one day meet Sergeant Johnson again comes true.

Hans travels to Alabama, where he solicits Kapp’s help to find Adok. Kapp recruits two of his WWII buddies to join the search. Now a team, Hans and Kapp’s quest to rescue Adok reveals a more sinister plot that may plunge the world into another global war and eventually lead the alliance back to Germany.

In this exciting second installment of the Lebensborn series, the number of people transfused with the serum grows, and so does the threat that their immortality may get discovered. Learn about the chauvinism and class struggles among the civil rights leaders. Discover what happened to the Oberstfuhrer, Victor Strauss.

In Book I, the high-minded Dr. Weiss didn’t think Strauss is the “Ideal Aryan Type”, and refuses to administer the serum to the Colonel. Dr. Weiss tells Strauss that the only way he will get the serum is if the Oberstfuhrer selects the vial containing the drug himself. In a dangerous game similar to Russian roulette, which vial did the Nazi Colonel choose…the deadly hallucinogenic or the Elixir of Life?