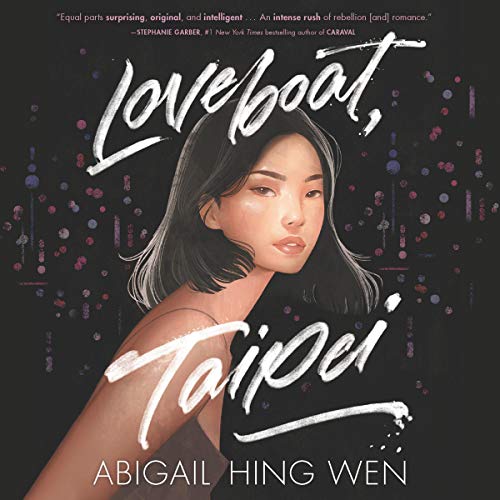 I don’t know what drew me to this book other than I saw that it was narrated by Emily Woo Zeller. I saw a book that looked interesting and completely different than any other book I’ve picked up in the last few years.  I’m glad I did.  The name and the cover really called to me, I had to know more about this book.

The book is hard to categorize. I would call it a coming of age tale since that’s the overarching story line, but there is so much more going on in Loveboat, Taipei. It tells of an Asian-American girl and her struggles with society, family, and the pressures of every day life. It’s about growth and maturing. It’s about friendships both good and bad.  It’s about love and how it comes out of nowhere and when you least expect it. Most of all it’s an insanely well written story.

I could gloat on this book for a long time but I don’t want to waste the time – just pick the book up. If you’re looking for something different (if you’re a typical reader of this blog) give this one a chance.  If you like YA and coming-of-age tales – this should already be on your list.  If you like stories where you feel like you’re going to learn both about another culture but another perspective – seriously, add this one.

I need to point out that the audiobook version of this, in my eyes, blows the traditional print and ebook versions out of the water due to Zeller’s performance. There are scenes in the book where non-English is spoken (I believe it was Mandarin but I don’t want to be wrong) and it’s spoken and then translated (sometimes partially like it really would be if a friend or family member was helping you understand). And Zeller spoke these lines so that you could hear them. She spoke them wrong when it was meant to be spoken wrong. And she took something that was meant to cause tension in the book (cultural and societal differences) and made it feel like even more of a problem. I wanted to call this out because it was really one of the strengths of this audiobook.

Overall, a complete surprise to me. A contender for the most interesting and potentially best book I’ve read this year so far. It’s still early but I bet I’ll be thinking of this book throughout the year.

I also chatted about this book on my Booktube channel.  Check it out here (the video should play from where I talk about this specific book).

And just like that, Ever Wong’s summer takes an unexpected turn. Gone is Chien Tan, the strict educational program in Taiwan that Ever was expecting. In its place, she finds Loveboat: a summer-long free-for-all where hookups abound, adults turn a blind eye, snake-blood sake flows abundantly, and the nightlife runs nonstop.

But not every student is quite what they seem:

Ever is working toward becoming a doctor but nurses a secret passion for dance.

Rick Woo is the Yale-bound child prodigy bane of Ever’s existence whose perfection hides a secret.

Boy-crazy, fashion-obsessed Sophie Ha turns out to have more to her than meets the eye.

When these students’ lives collide, it’s guaranteed to be a summer Ever will never forget.