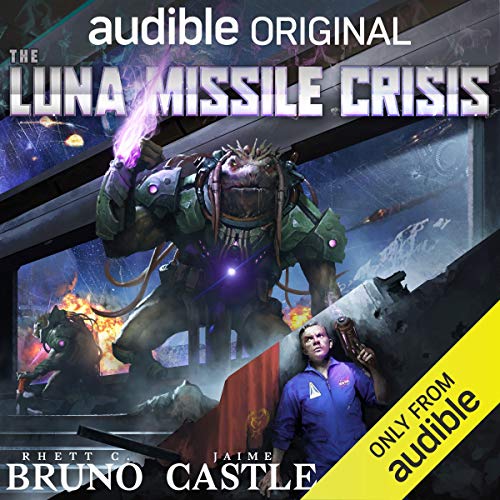 I went into this book without even reading the synopsis. I saw who wrote it, who narrated it, and what the cover looked like and I was in.  The title gave me a bit of an idea of what was going on (but even I didn’t get the reference until more than halfway through the book).

The Luna Missile Crisis tells the story of an alternate reality 1960s where instead of the space race that we know and remember – during the original flights – we’re met with a mothership and a first encounter with mysterious aliens known as the Vulbathi. Meeting them changes everything, both on earth and in space.

The book itself was nonstop. I mean that in such a great way. Castle and Bruno wrote a book that I just couldn’t put down. The alternate history angle of it really made it interesting to me.  I know the history of the space race and the Cold War. It was one of those books that roots you into an era but then slaps your face and changes almost everything.  Sure JFK was there and he was president, but because the space race and for the most part the Cold War were “solved” by the Vulbathi, his role was slightly different. I won’t go into spoilers, but I also like that the things that happened to and because of certain historical figures seemed to follow a script of realism as well. (I really want to talk more about this but I definitely don’t want to spoil some of the major plot points).

This book not only knocked my socks off, it knocked my socks off and sent me to space to look for them. It had me guessing and trying to figure out what was going to happen. It also rooted me in my seat and had me watch as things happened that were out of my control. I found the entire book, the lessons it tried to teach, and the overall vibe of it just fascinating. Easily my favorite book from Rhett C. Bruno and Jaime Castle.

Ray Porter is already one of my favorite narrators – but this book takes the cake. The amount of real people he had to be in it made his job exponentially harder. But he absolutely nails it. His JFK was spot on and really added that bit of realism in that Bruno and Castle were going for. He takes an already fantastic book and just knocks it out of the park.  :insert slow clap here:

Overall, all I can say is wow. If you’re looking for a sci-fi book that will surprise you – check this one out.

Audible number-one best sellers Rhett C. Bruno and Jaime Castle return with a relentless sci-fi adventure that asks: What if?

The year is 1961. The Cold War is in full swing and the space race is on. Russia aims to send humanity to space. But what if space comes to humanity instead? Yuri Gagarin’s epic flight into space is disrupted when an alien Mothership jumps into orbit, causing a cosmic car crash that defies all odds.

Everything changes. The US and USSR must quickly put aside their differences. In exchange for the Earth’s help in the rebuilding of their Mothership, the mysterious aliens, the Vulbathi, offer promises of technology beyond humanity’s wildest dreams. All the while, the world asks whether the Vulbathi are saviors or conquerors.

When an alien tech counterfeiter’s mistake sets off a chain reaction, the fragile peace is threatened. Connor McCoy didn’t mean to upset Earth’s new intergalactic neighbors. He only wanted to make some cash.

Now, Connor is the only person who can stop the doomsday clock from striking midnight. That is if his estranged brother, an agent in the new Department of Alien Relations, doesn’t stop him first.