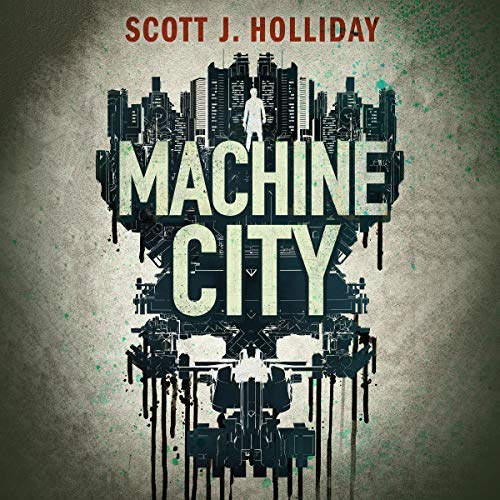 An Interesting Take on a Mystery

To be honest, diving into Holliday’s Machine City – I did not realize that I was starting with book two.  I regret not reading book one because I think he covers a lot of the topics and more of the “what makes these characters tick” along with some better detail and explanation of the technology and why and how it’s being used (and abused).

Starting with book two was a little bit of a hindrance to the start of the story and I ended up putting it down for a little bit (I honestly had the intention of picking up the first book, Punishment, but time got away from me). Thankfully Holliday was able to explain at least most of the important things that I missed in Punishment.

In Machine City, we have a detective who no longer wants to get on the machine who is basically asked/forced (depends on how you read into it) to get back on the machine at least one more time to help solve a missing child. Without ruining the rest of the book – I’ll skip ahead to my thoughts.

Machine City was a book that surprised me.  The technology in it was reminiscent of a lot of movies and books that I’ve read but not any specific one that I could say “yup, it’s just like that one”.  It seemed to take bits and pieces from a lot of Thrillers and Sci-Fi that I’ve enjoyed, shook them up, and poured out Machine City.

John Barnes was one of those “you don’t like him until you do” kind of characters, especially starting from scratch and not knowing who he was or what made him tick.  The first time I remember falling for him was when he came out of the machine screaming.  I thought, “oh my god, who the heck is this and I need to know more”.

Overall, Machine City was one of those futuristic thrillers that felt gritty and real.  Holliday was able to tell a story that could have been set in almost any time period with almost any tech but did it in a way that incorporated some new technology that added another layer of depth to the story.

In this unputdownable thriller set in the new future, a detective enters the mind of a killer to find a missing child.

To ex-detective John Barnes, the machine is a dangerous and abhorrent addiction. The criminal thoughts it embedded in his brain helped him stop a serial killer, but they left him dazed - with pounding, murderous impulses. Having turned in his badge to salvage what’s left of his psyche, Barnes must return to the darkness at the request of his former partner. A little girl has gone missing. So has Adrian Flaherty, the detective in the kidnapper’s shadow.

And only Barnes can hear the clues.

But the trail is more dizzying and more personal than he feared. The voices are revealing a secret only Flaherty could have known. They’re also telling Barnes that he doesn’t have long to live. To find the girl, he must listen closely. Because the clock is ticking…and Barnes’s mind is going fast.