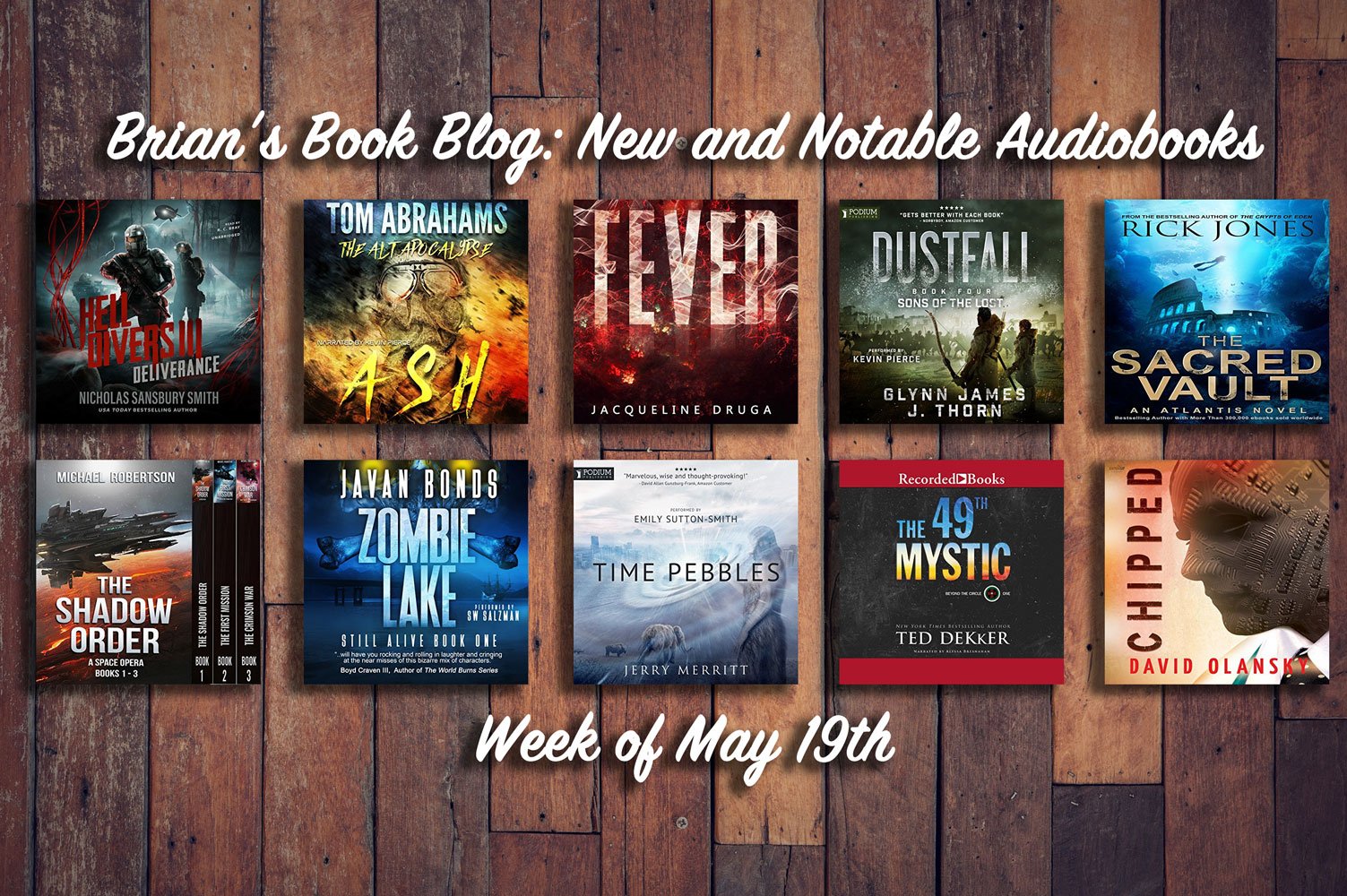 Here are this week’s (Week of May 19th) new and notable audiobooks featuring Post-Apocalyptic, Sci-Fi, Thrillers, and more from Brian’s Book Blog.

New to Audible or Audiobooks in general? Get 2 free books (instead of just 1!) when you sign up using this link:  Try Audible and Get Two Free Audiobooks 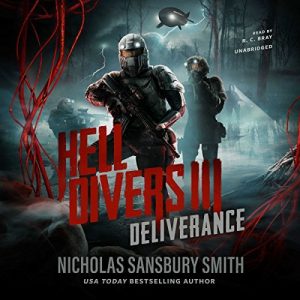 They will dive, but will humanity survive?

Left for dead on the nightmarish surface of the planet, commander Michael Everhart and his team of Hell Divers barely escape with their lives aboard a new airship called Deliverance. After learning that Xavier “X” Rodriguez may still be alive, they mount a rescue mission for the long-lost hero.

In the skies, the Hive is falling apart, but Captain Jordan is more determined than ever to keep humanity in their outdated lifeboat. He will do whatever it takes to keep the ship in the air – even commit murder. But when he learns the Hell Divers he exiled have found Deliverance, he changes course for a new mission – find the divers, kill them, and make their new ship his own.

In the third installment of the USA Today best-selling Hell Divers series, Michael and his fellow divers fight across the mutated landscape in search of X. But what they find will change everything. 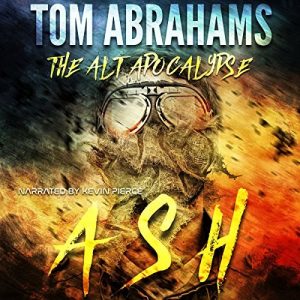 It explores survival under the most extreme circumstances, but with a twist (and no cliff-hangers). This series, which can be heard in any order, features the same core characters in each complete story. But every audiobook dunks them into a new, alternate apocalypse and a nuclear holocaust – an earthquake, a flood, a wildfire, a hurricane, a plague, and even zombies.

Different heroes will emerge in each novel. Different characters will survive and perish. Your favorite character dies in one audiobook? He or she will be back in the next. In the end, you’ll unwind the loose thread that connects every character and every stand-alone story.

In Ash, Abrahams tells the story of four college friends, an ex-con, a lonely fry cook, and a secretive group of prepared civilians as they each battle to survive in southern California after a series of nuclear attacks. Theirs is a gray world covered in ash and nuclear fallout.

Do they hunker down? Do they bug out? Do they find their salvation above ground or below? 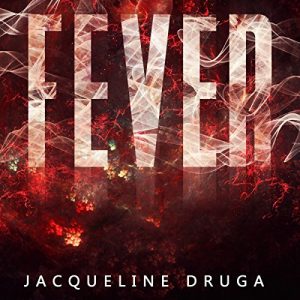 The virus causes such a high fever that the body succumbs in days. It is everywhere. The death rate is out of control.

When an outbreak of H7N2, or as the news calls it, Whitby Fever, begins striking cats and dogs, it is newsworthy but not panic-inducing, until it is confirmed that Whitby Fever has crossed the boundaries, spreading from domestic pets to humans at an astronomical rate.

Mills Run, Ohio, is not much different from any other small town. The residents have a bond and kinship. The townspeople brag that Mills Run is isolated, and at times, cut off from the rest of the world. However, not even Mills Run is secluded enough for a global pandemic.

However, when the virus strikes, the townspeople of Mills Run quickly learn they are not immune. Clare, like every other mother, sister, and daughter in the world, does her part to fight and help those around her who she loves. A face mask may be her armor, her good heart may be her shield, but there is no weapon to defeat the fever because there is no cure.

Mother Nature rages a viral war against the world, and Mills Run is one of the millions of battlegrounds fighting to live. 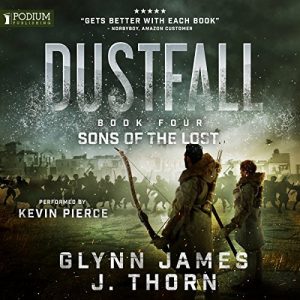 The Valk swarm and the Cygoa assault the Elk in a violent attempt to wipe the T’Yun descendants from the land. Jonah must find his family and unite the clans as Seren returns with a technology that could decisively end the war.

From best-selling authors J. Thorn and Glynn James comes Dustfall, a new post-apocalyptic series chronicling one man’s challenge and his epic quest to save what remains of humanity. 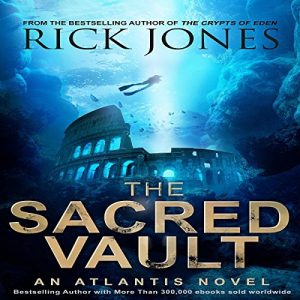 The Sacred Vault by Rick Jones
Narrated by Bill Burrows

Deep in the Atlantic Ocean lies the ancient city believed to be Atlantis. It is, however, much more than that. After John Savage and Alyssa Moore realized that mankind was on the brink of an extinction-level event, they seek the one relic that could elevate mankind to the next step of evolution – or be destroyed by it.

While working alongside a military unit that works strictly “off-the-books” and without Congressional approval, John and Alyssa team up once again to search for the sacred vault deep beneath an ancient coliseum. Terrors run deep, and nobody is safe. Dangers exist in every corner and at every turn.

As John and Alyssa discover the secrets of man’s future through the written prophecies of the doomsday calendar, one thing is for certain: in the mountains of Tibet, a sleeping giant has awakened.

And the only thing that may save them is the Emerald Tablet. 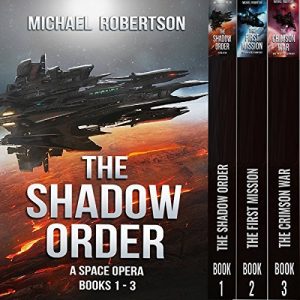 If you like bold characters, planet-hopping, and edge-of-your-seat action, then you’ll love Michael Robertson’s thrilling series.

In a fight, Seb is unbeatable. But in this galaxy, there are a million ways to lose… Seb Zodo has never backed down from a fist fight. After all, he’s been gifted with powers that make losing impossible. But lately, Seb’s gift seems more like a curse… Seb’s fearlessness leads to stupid decisions, short-lived jobs, and unwanted attention in dangerous places. In a desperate bid at a fresh start, Seb swears off fighting. But it may be too late… When a run-in with an electrifying thief and the head of a shadowy organization sends his life spiraling out of control, Seb has no choice left but to go down swinging…

This bundle also includes The First Mission and The Crimson War, the second and third books of The Shadow Order series. 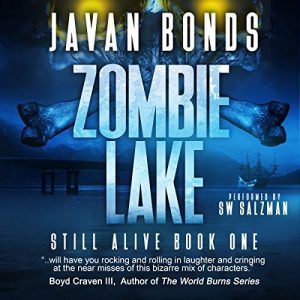 Mo Collins, the reluctant hero, has sailed around the country on board the replica pirate ship, the Viva Ancora, and now he finds himself only miles from his childhood home. But now the world has gone to hell. Hordes of naked, blue, biting zombies have flooded the now dead Alabama lake town. Mo and his only surviving shipmate, Crow, are surviving. They fish and watch the monsters roam the night; seeking untainted flesh and leaving a disgusting mess in their wake. But when a lone survivor stumbles upon Mo and Crow they gain a new crew member but also find much-needed direction. The newcomer, Smokes, will change Mo’s view of this zombie infested world forever.

As reality mimics fiction, an ever-growing cast of crazy characters play out their role carving out an island sanctuary in a plague-ridden world. The Expert, The Tech, The Oracle, The Sacrifice, The Old Friend, plus many more… Join us on this wild ride where the fish bite, the Zombies bite…sometimes life bites.

Welcome aboard, friend, to Zombie Lake. 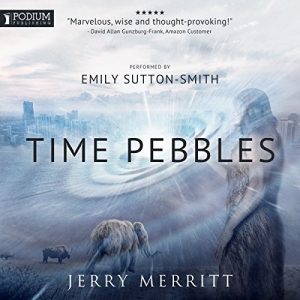 Tekla, son of an ancient shaman, loses Ka Li when she is torn from his life by a brutal tribe of Denisovans in a Late Pleistocene kidnapping.

Ka Li escapes but is unarmed and forced to flee across the Bering land bridge where she becomes hopelessly lost in the endless tracts of North America. Only Tekla cares enough to search for her over the years. As Ka Li survives fierce predators and scarce resources, she leaves behind a series of signal cairns to help Tekla find her.

Skipping forward 60,000 years, Helen Ryland, a mid-20th century archaeologist, unearths one of Ka Li’s surviving signal cairns and realizes she has found trace of people who populated the Americas even before the Clovis culture. Helen’s detective work tracking Ka Li’s timeless signals across the Alaskan wilderness now intertwines with Ka Li’s story. As Helen solves the puzzle of the signal cairns she finds universal fame and suffers devastating misfortune. In the end, Helen discovers that science in isolation cannot answer all of her questions for Tekla’s devotion to Ka Li had not died even though 600 centuries had passed. 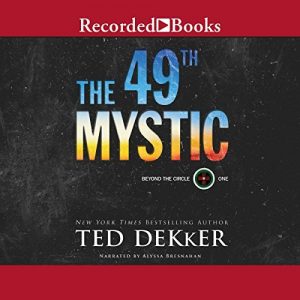 Some say the great mystery of how one can live in two worlds at once died with Thomas Hunter many years ago. Still others that the gateway to that greater reality was and is only the stuff of dreams. They are wrong.

In the small town of Eden, Utah, a blind girl named Rachelle Matthews is about to find out just how wrong. When a procedure meant to restore Rachelle’s sight goes awry, she begins to dream of another world so real that she wonders if Earth might be only a dream experienced when she falls asleep in that reality. Who is a simple blind girl to have such strange and fantastic dreams?

She’s the prophesied one who must find and recover five ancient seals – in both worlds – before powerful enemies destroy her. If Rachelle succeeds in her quest, peace will reign. If she fails, both worlds will forever be locked in darkness. So begins a two-volume saga of high stakes and a mind-bending quest to find an ancient path that will save humanity. The clock is ticking; the end rushes forward. Ready? Set? Dream. 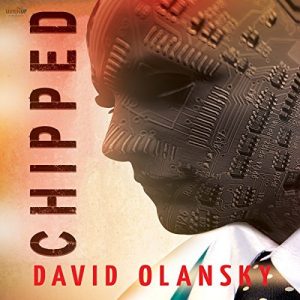 What if there were a way to become faster, stronger, smarter, better? To achieve every task you’ve ever set your mind to? What if you could finally reach your ideal weight, master any language, or kick that one bad habit that’s been standing in your way, all at the cost of a chip in your brain. With the advent of a revolutionary neurosurgical procedure, the Chipped Program represents all of the potential that humanity can achieve. For better and worse.

Originally conceived as a means of curing debilitating neurological diseases, a more insidious plot is revealed when an old shadow returns to reclaim what is rightfully his. This is the world in which Dr. Chips, a hapless dermatologist trying to do nothing more than keep his head above water, finds himself. Now he’s caught in the middle of a brewing war between those who would usher humanity into an unprecedented age of possibility, and those who would use whatever means necessary to bring the world to its knees.

Armed with nothing more than a sharp tongue and an irreversible addiction to gummy bears, Chips must confront these terrors head on, and maybe even give this whole saving-the-world thing a try.

Written by first-time novelist David Olansky, Chipped is a gripping tale of what can happen when technology falls into the wrong hands.