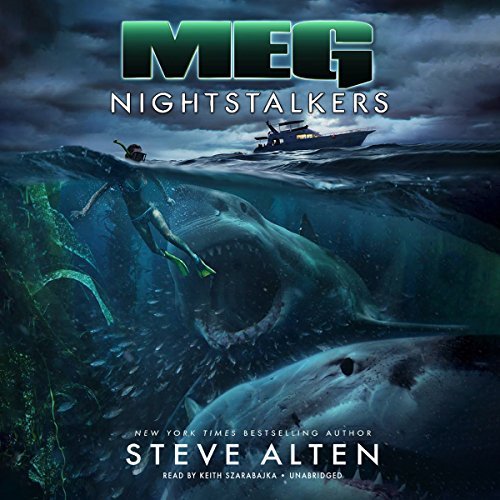 Alten Knows How To Bring The Action

I’ve been a reader of the MEG series for quite some time.  I remember picking the first MEG book out at the local library in my hometown and thinking “what the heck is this?” I was enthralled. I grew up loving dinosaurs and sharks and this felt like the perfect combination of the two.  Fast-forward probably 10-15 years and you have me now – I still love dinosaurs and sharks and now the MEG series.  Alten has been writing these for years now and I’ve enjoyed each one of them in their own way. In book four (Hell’s Aquarium) Alten introduces not only a new character but a whole new group of them from an underwater lake. Nightstalkers picks up where that left off (with a slight intro that got me back up to speed).  And just goes pedal to the metal from that point on.

Nightstalkers is right on par with the other MEG books along with Alten’s non-MEG books.  There was even a small scene that would end up being a hint to his newer book Undisclosed (zero-point energy).  Alten knows how to weave ancient history (old dinos/sharks/animals/fish) and technology into a seamless and entertaining joyride of a book.

Nightstalkers is full of action and a lot of “breath-holding” scenes where you’re really not sure how anyone is going to make it out alive. I like books like that.  Sure, sometimes they can be mindless, but every time Nightstalkers would slip into that Alten would throw a curve ball with some new science or technology.

I also particularly liked that one of the characters had Parkinson’s – since Alten himself also has this ailment.  It just felt like a nice inclusion and a way to write about it without shoving it in your face (it wasn’t the main character or anything like that).

Overall, MEG: Nightstalkers was an action-past, slightly mindless, entertaining piece of fiction.  What more would you expect featuring prehistoric sharks!?

In this fifth installment of the New York Times best-selling Meg series, Meg: Nightstalkers picks up where Meg: Hell’s Aquarium left off.

Bela and Lizzy, the dominant megalodon siblings from Angel’s brood, have escaped the Tanaka Institute to roam the Salish Sea in British Columbia. While Jonas Taylor and his friend Mac attempt to either recapture or kill the “sisters,” Jonas’ son, David, embarks on his own adventure, motivated by revenge.

Having witnessed his girlfriend’s gruesome death, David has joined a Dubai prince’s ocean expedition, tracking the 120-foot, hundred-ton Liopleurodon that escaped from the Panthalassa Sea. Haunted by night terrors, David repeatedly risks his life to lure the Lio and other prehistoric sea creatures into the fleet’s nets, all while battling his own suicidal demons.

Steve Alten weaves these storylines together in a thriller that culminates in a final showdown between the most dangerous predators ever to inhabit the planet.

Also by this author: Undisclosed

Steve Alten grew up in Philadelphia, earning his Bachelors degree in Physical Education at Penn State University, a Masters Degree in Sports Medicine from the University of Delaware, and a Doctorate of Education at Temple University. Struggling to support his family of five, he decided to pen a novel he had been thinking about for years. Working late nights and on weekends, he eventually finished MEG; A Novel of Deep Terror. Steve sold his ’71 Malibu convertible to pay for editing fees. On September (Friday) the 13th, 1996, Steve lost his general manager’s job at a wholesale meat plant. Four days later his agent had a two-book, seven figure deal with Bantam Doubleday. MEG would go on to become the book of the 1996 Frankfurt book fair, where it eventually sold to more than twenty countries. MEG hit every major best-seller list, including #19 on the New York Times list (#7 audio), and became a popular radio series in Japan.

Steve’s second release, The TRENCH (Meg sequel) was published by Kensington/Pinnacle in 1999 where it also hit best-seller status. His next novel, DOMAIN and its sequels, RESURRECTION & PHOBOS: MAYAN FEAR were published by St. Martin’s Press/Tor Books and were #1 best-sellers in Spain, Mexico, and Argentina and best-sellers in Germany, and Italy, with the rights selling to more than a dozen countries.

Steve says his best novel is GRIM REAPER: End of Days. The story, a modern-day Dante’s Inferno, takes place in New York when a man-made plague strikes Manhattan. In addition to his fictional thrillers, Steve penned a laugh-out-loud rom-com entitled DOG TRAINING THE AMERICAN MALE, written under the pen name L.A. Knight. A complete list of Steve’s novels is listed below.