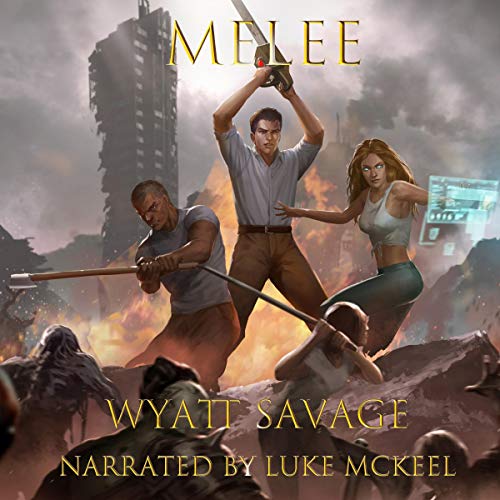 Another book that I went into blind, I have to call out right away the awesomeness of the cover art here.  It shows the main three characters and allows the reader to get an image or at least a base for what each of them look like. I had no idea just how accurate it was going to be until I got into the book, but it’s pretty spot on.

The main story revolves around an alien invasion battle royale.  This is not the first book that I’ve read where this happens, but this is the first semi-serious book. (The first book was Space Force by Jeremy Robinson, but that one is balls-to-the-wall funny). That’s not to say that Melee wasn’t funny. There were a lot of moments in it that had me smiling or chuckling as I read it. Also, I appreciate the adult audience that Melee is going for. I think that Savage was writing to adults and I noticed it almost from the beginning.  Sure, some adults won’t know battle royale games or XP but the tone and overall language has a distinct not-YA vibe to it.  Not that there’s anything wrong with YA LitRPG (they’re usually fantastic). I just appreciated the cursing that happened almost immediately in the book and the Savage was not afraid to show some gore.

Each of the main character brought something interesting to the story. I found that I was rooting for them without even realizing it.  Each moment that they were thrown into I couldn’t figure out how they were going to get out of it, but they utilized their combined strengths to figure a way out.  Logan stood out the most (since he was given the most back story). The brain injury and subsequent story after that was fascinating and added another level to this that I wasn’t expecting.

I also want to comment on the narration by Luke McKeel. This is the first book I’ve listened to where he narrates – but it will not be the last.  He acted out some of the scenes and in the moment I wasn’t sure how I felt about it but looking back now, the scenes where yelling happened (lots of “Get down!” and similar moments) wouldn’t have felt right if they were just said. It’s not overacted by any means and it’s not a dramatic read either. It ended up being the perfect fit for this story. Looking on Audible, this appears to be his first book but don’t discount him. This was a great first read.

Overall, a really enjoyable read with a great performance. I looked at his Amazon author page and saw that the stories in the series appear to be related to different people and how they dealt with the Melee.  That’s an interesting take and I hope that the characters that Savage builds into those stories are as good as the ones in book one.

What was once virtual, is now reality.

Trapped in the middle of an alien invasion, Logan James, a down-on-his-luck dollar store cashier, discovers there’s only one way out…

Compete in an alien-imposed game, a global battle royale called the Melee.

Forced to fight with his best friend Dwayne and a cute cashier named Alicia, he finds that the rules are simple: battle against the other participants and an army of the galaxy’s worst monsters and villains, level up, amass experience points and loot, and use any means necessary to reach the center of the Earth in 19 days.

Hundreds of people will live.

Hundreds of millions will die.