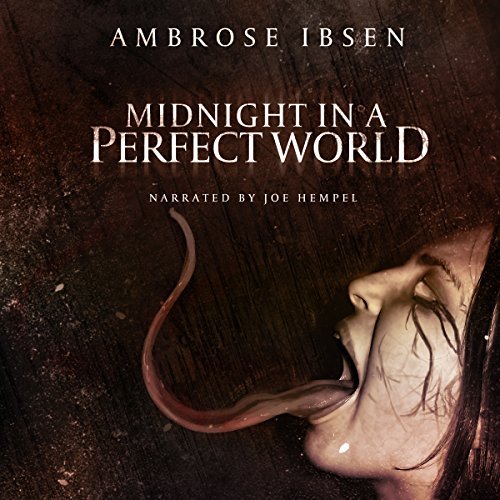 Weird, thrilling, and everything in between!

I have to admit… I was terrified to read this, and not because I thought it would be scary, (duh, Ambrose Ibsen wrote it so it’s bound to be scary!!) but because I’ve read some of the reviews and let’s just say that some of them weren’t glowing! I adore this authors books and didn’t want to have one I hated. So I entered the story with a lot of trepidation and very little expectations, but I needn’t have worried because I loved this!! I will say that it’s not a book that you can read lightly, you actually need to take your time and savor the story, you need to pay attention and you need to listen/read it closely.

I know the way the plot was written was what had a lot of people disliking the story, but I actually really enjoyed it. It’s totally different than what the author usually does, and I applaud him for taking the risk because it was worth it! The plot is centered around a new drug that has the potential to cure the mind and could see millions of people benefit from it, but when a grad student involved with the research commits suicide and the doctor who was overseeing it disappears, a private detective is hired by the grad students parents to uncover the truth. Strange things are happening to anyone who takes the drug and secrets are uncovered but is it too late to stop?

I don’t want to say anything else about the plot because it’s better to experience it yourself. You will have to work a little bit to fully immerse yourself in the world that author has created, but once you do and once you get a grip of the way it’s told, then you are in for one heck of a ride!! It’s not a really scary read, but it is creepy, thrilling and will suck you in till you have finished the last page. This author continues to astound me with the creations he comes up with!! Give this a go, take your time with it and I think you’ll be surprised at how much you enjoy it!!

When you have an Ambrose Ibsen book that’s narrated by Joe Hempel, you know you have a winner. (Well… when you have any book narrated by this narrator, you have a winner!!) He is firmly on my list of favorite narrators and I always recommend him. I think I enjoyed this as much as I did because of the narrator. He was able to bring the atmosphere to life and was able to keep my attention from wandering. He knows creepy and he knows how to use inflections to bring it to life!! Brilliant performance from a master narrator.

A mysterious suicide. Horrific specters walking the streets. A drug that promises to change the world. An apocalyptic cult.

Something is stirring in the city of Duluth, Minnesota. Ever since a celebrated researcher announced the creation of a new experimental drug - a drug with the potential to cure the mind of countless ills - people have been disappearing. When a grad student involved with the drug's development unexpectedly commits suicide, a private detective is tasked with unearthing the details of her tumultuous final days.

This miracle drug may not be what it seems. Others touched by the drug begin to see things - horrible things - and find themselves transported into a nightmarish world where an ancient evil stirs.

Those who taste the drug are left spiraling into horror. Dark figures tail them on the street, and the scenery of their nightmares begins to encroach upon waking life, blurring the lines between dreams and reality. Their terrifying experiences make up the individual fragments of a dire mosaic. As the pieces fall into place, they come to realize the unspeakable horrors that await all of mankind.

Midnight is looming, and the sun may never rise again over the city of Duluth.

The Conqueror Worm (Black Exorcist #1) b